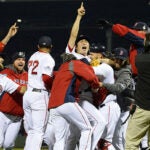 Future financiers at HBS are urged by Summers to reshape, improve the industry

Don’t just do better, be better. That was the exhortation that students attending the 2013 Finance Conference at Harvard Business School received Sunday from economist Lawrence H. Summers.

Summers, a former U.S. secretary of the Treasury, was sharply critical of the financial system’s flaws and excesses of the last 30 years and laid out his view of the fundamental changes that the next generation of financiers should make if substantive reform is to occur.

From 1946 to 1980, there were relatively few crises and few victims at the hands of the U.S. financial system, he said. Since then, the system has been routinely fraught with casualties, culminating in the 2007–08 economic meltdown.

“The financial system has not produced obvious benefit in terms an improved allocation of capital. It seems again and again to have been a source of instability and disruption for the lives of huge numbers of people outside of it. And … at least for the last 15 to 20 years, it has not really been very good for those who invested in it,” Summers said. “It’s not just yahoo populists who see something a little troubling about this picture.”

Summers, president emeritus and Charles W. Eliot University Professor of Harvard University, has served in other top economic advisory positions in the federal government, including as director of the National Economic Council under President Obama. He was widely considered a frontrunner for chairman of the U.S. Federal Reserve before Obama named Vice Chairman Janet Yellen to the post last month.

Looking back on his own career, Summers conceded that stronger financial reform regulations, like many included in the 2010 Dodd-Frank Act, “should have” been put in place back in the 1990s, but a failure of foresight and a political climate hostile to regulation prevented it from happening. He defended, however, the 1999 repeal of the Glass-Steagall Act limiting commercial banks in the securities industry, saying, “It didn’t change much, and what it did change didn’t contribute to the crisis.”

Summers urged HBS students to consider three guiding principles as they embark on their careers:

Ultimately, Summers said, business school education will need to help reshape how students think about the priorities of the financial industry and envision their roles in it.

“It is a deep human tendency to be overconfident and to not recognize what [former Secretary of Defense Donald] Rumsfeld called the ‘unknown unknowns,’” Summers said. “How you develop good judgment — I don’t know how you teach it exactly. But I think that’s probably more important to teach than a certain number of platitudes about how it’s good to be ethical or a certain number of judgments about situations where you’re on the margins, so you could argue what’s ethical and what’s not ethical. But I think these questions of developing better judgment are a very important aspect of avoiding these problems in the future.”