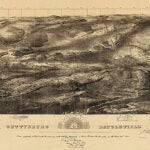 Harvard in blue and gray

This year marks the 50th anniversary of Betty Friedan’s “The Feminine Mystique,” a culture-shaking manifesto that detailed what the 1942 graduate of Smith College called the “problem that had no name.”

Friedan’s “problem” was a simmering lack of fulfillment among women at midcentury. They longed, she said, to be more than just perfect housewives and doting mothers. Her revolutionary book touched a deep nerve in American society, and was credited with starting what came to be known as the women’s liberation movement.

A revealing exhibit at the Schlesinger Library on view through Feb. 6 charts the evolution of Friedan’s seminal work. What began as a college reunion survey (a copy is on display) morphed into a treatise of 300-plus pages that looked deeply into gender, power, and sexuality.

“We felt like the exhibit should be about the writing of the book,” said Jenny Gotwals, lead manuscript cataloger, who helped assemble the show. “It Changed My Life: The Feminine Mystique at 50” was gleaned from the 150 boxes of Friedan material housed at the library.

Arranged in seven glass cases, the exhibit offers viewers a look at the book’s genesis and at the passionate reactions that Friedan’s work inspired. The exhibit also touches on the National Organization for Women (NOW), which she helped found in 1966, and her connection to the President’s Commission on the Status of Women, whose report, also released in 1963, candidly assessed women’s status in American society.

“For an honest, soul-searching picture of what we have become, be candid, elaborate where the spirit moves you,” urges the first line of the survey Friedan distributed to members of her college class at their 15-year reunion. The survey, along with some revealing responses, is contained in the show’s first glass case. Under the “marriage” heading in her comprehensive poll, Friedan included questions like: “Is it truly satisfying?” and “How does it compare with your expectations of marriage?” On Friedan’s own survey next to the question “To what extent do you talk to your husband about your deepest feelings?” she wrote: “Only after an emotional crisis or rift.”

Friedan pitched an article based on her findings to several magazines, but when the editors balked, she changed course and spent the next several years turning her research into a book.

Frustrated with the slow rate of change in laws and cultural expectations for women, a group of men and women founded the National Organization for Women (NOW) in 1966. Betty Friedan was president of NOW from 1966 to 1970.

Displayed under a second glass case are the handwritten first drafts of Friedan’s early manuscript. On a yellow legal pad, containing what would become the last two paragraphs of her book, are the underlined words “Never underestimate the powerful woman.” Nearby, a typed outline for the work appears under Friedan’s original title “The Togetherness Woman.”

In addition to chapters that challenged the work of social scientists like Sigmund Freud and Margaret Mead, Friedan attacked the advertising industry in her book to “bolster her argument,” the exhibit’s notes read, “that American women were infantilized, sexualized, and shown as incapable of serious thought or work.” On an exhibit wall next to a near-complete page from Friedan’s chapter titled “The Sexual Sell” hang pages that the author tore from popular magazines of the day, including one touting Celanese, a producer of “contemporary fibers.” The ad’s copy, which became part of Friedan’s finished chapter, claims the American housewife “gets as excited as her 6-year-old about the opening of school. She reckons her days in trains met, lunches packed, fingers bandaged, and 1,001 details. She could be you, needing a special kind of clothes for your busy rewarding life.”

“We wanted to show all these different ways that she approached the book,” said Gotwals.

The vivid reactions to Friedan’s work contained in the show offer viewers a look at a nation divided over her message. “She received hundreds of letters from men and women … in response to the ‘Feminine Mystique,’ and then to other writings later on,” said Gotwals.

Many readers connected on a personal level with Friedan’s message, like the woman who wrote to her in November 1964. “BETTY FRIEDAN — I LOVE YOU,” the letter begins. Later, the avid fan tells Friedan, “Now I know why I have been asking myself, and anyone who would listen, ‘Who am I?’ … I am never going to forget that I am not my husband’s other self; I am ME. I will bless you as long as I live.”

But others were irate. When an excerpt of Friedan’s book appeared in the March 1963 issue of the women’s magazine McCall’s under the headline “The Fraud of Femininity,” many women responded with scathing critiques. One letter offers up a brief and blunt assessment of Friedan’s argument.

“I have just one thing to say … ‘Hogwash.’ From a very happy, contented, but obviously and without knowing it, trapped housewife.”

In a typed letter from 1963, historian Gerda Lerner praised Friedan’s “splendid book,” but also expressed a major concern. “You address yourself solely to the problem of middle-class, college-educated women,” wrote Lerner. “This approach was one of the shortcomings of the suffrage movement for many years and has, I believe, retarded the general advance of women.”

(The library will sponsor a symposium Dec. 5 to honor Lerner and celebrate its 70th anniversary.)

Gerda Lerner was at the beginning of her career as a historian when she wrote a letter to Betty Friedan critiquing the assumption of universality of experience based on gender.

Visitors can peruse 150 digitized letters to Friedan via an iPad, or listen to the outspoken author in her own words. The exhibit contains several audio clips of Friedan’s appearances on radio and TV, including one interview from 1965 in which she bluntly tells the host “there is a malaise, a stirring unease, a feeling of not being fully alive on the part of a great many women.”

In addition to connecting with many American housewives, Friedan’s message was gaining traction with another, influential group of women, and men. After receiving an advance copy of the book from publisher W.W. Norton, Friedan was asked by the President’s Commission on the Status of Women to be part of the commission’s mass media consultation in 1963.

Friedan’s official letter of invitation signed by Esther Peterson, the commission’s executive vice chairman, is part of the show, as is the author’s annotated copy of the commission’s findings, which is contained in a case that highlights the commission’s work. On page 43 of the booklet, Friedan scribbled stars and exclamation points next to the words “paid maternity leave or comparable insurance benefits should be provided for women workers; employers, unions, and governments should explore the best means of accomplishing this.”

“It Changed My Life: The Feminine Mystique at 50″ will be on display at Radcliffe’s Schlesinger Library through Feb. 6. To mark the Schlesinger Library’s 70th anniversary, six historians will reflect on five decades of change in U.S. women’s history during the career of historian Gerda Lerner (1920–2013), who was a singular force in developing the field. The symposium will be held Dec. 5.