Change is on the runway 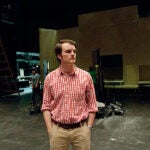 Getting to the dark heart of ‘Conspiracy’

Once airfields, then mini-cities, airports are now turning to landscape design to solve problems

In a park on the western edge of Paris in 1783, two Frenchmen stood on a platform beneath a 75-foot, hot-air balloon made of varnished taffeta. When the whimsical gold-and-blue balloon, decorated with suns and signs of the zodiac, rose into the sky, so began the world’s first free flight by humans. The balloon went up 3,000 feet, covered five miles, and landed after 25 minutes.

For a century afterward, balloon ascents around the world typically began in a city’s public gardens and parks. The notion that “flight” and “park” were logically joined lasted well into the era of powered aircraft. In the 1930s, airfields were still seen as hybrid spaces, part technical and part recreational.

Some landscape architects of the era would have continued the tradition of airfields as airparks. They were “air-minded,” said Sonja Duempelmann, associate professor of landscape architecture at Harvard’s Graduate School of Design (GSD). Their designs were influenced by traditional parks and by the modernist geometry that decades of aerial photography had revealed.

But “air-minded” landscape architects were soon pushed aside. By the mid-1930s, airports had to accommodate more powerful planes, build longer runways, handle more passengers, and deal with more cars. Since then, the airport has become, for most people, “a technical and engineering site,” said landscape architecture chair Charles Waldheim, GSD’s John E. Irving Professor. The landscape became decorative and peripheral.

But that pendulum has swung back. Airports are now more concerned about the landscape and may even become laboratories for how the cities of the future will operate, since airports have complex environments of intensive energy consumption, water use, waste generation, security concerns, transportation pressures, and commercial enterprise. “The airport itself is this nice nucleus that can act as a container of broader ideas,” said Duempelmann.

With airports emerging again as an ecological design space, Waldheim and Duempelmann organized a conference. “Airport Landscape: Urban Ecologies in the Aerial Age” unfolds Thursday and Friday at Gund Hall. At the same time, Boston is hosting the annual meeting of the American Society of Landscape Architects, with 7,000 expected to attend.

The Harvard conference will live on through Dec. 19 in an exhibit of the same name, co-curated by Duempelmann and Waldheim. Its color scheme, signage, and scale are all echoes of modern airports. It is the first time, organizers said, that every display space in Gund Hall has been given over to a single theme.

The public’s expectations of airports shifted over time. By the end of World War II, airports were no longer small parks or remote grids in the countryside. They were increasingly absorbed into the fabric of cities, and were a sideshow for landscape designers.

Beginning in the 1960s, though, airports became central to the idea that environmental concerns had to be designed into public spaces, and now that’s a dominant attitude. “There has been a sea change in the last decade or two,” said Waldheim, a consultant to airports who is writing a book on the nature, culture, and history of Chicago’s O’Hare International Airport. Landscape architects now have a growing profile in airports being designed, maintained, and even decommissioned.

Of that last category, “there are countless numbers” of abandoned airports, Waldheim said, “hundreds and hundreds around the world. It’s a phenomenon that will not slow down soon.”

The challenges to reviving them are real, and potentially expensive. What do you do, Waldheim asked, with a retired landscape that, for instance, has two miles of runway that is 6½ feet thick? How do you deal with altered landscapes? (O’Hare, for instance, is layered over what were once spongy meadows and riverine wetlands.) How do you deal with a legacy of pollution in groundwater and soil? (Each time a jet touches down, for example, it leaves patches of rubber that soon slough off into the landscape.)

In the airports exhibit

At the heart of the Gund Hall exhibit are case studies: photos, diagrams, and text exploring how operating airports are embracing an ecological approach, and how decommissioned airports are doing the same. Proposals for reimaging old airports include turning them into parks or wildlife corridors, into sites for solar or wind power production, into urban farms, or into multi-use community spaces based on applications from citizen entrepreneurs.

In other cases, old airports might just be left alone so native plants can rush in to fill the void. The exhibit’s most haunting photo is of an abandoned runway shot through with grasses and shrubs: a meadow in the making.

The exhibit acknowledges that wildlife plays a big role in airport design. Bird strikes are dangerous to planes, so strategies for controlling geese and other species are on display, including a fake coyote standing guard, a hawk with spread wings, a robotic bird of prey, and a solar-powered sound cannon.

The conference will brings in scholars of the airport landscape from Paris, Zurich, Munich, London, and Utrecht, Holland, and more. There are panels and lectures on the airport “stress scape,” on airports as frontiers, cities, and biospheres, and on airports as sites of protest, of experiment, of air-quality science, and of history

The first keynote address, “Airport Landscape,” will be by historian, philosopher of science, and longtime pilot Peter Galison, Harvard’s Joseph Pellegrino University Professor. One message he will impart is that airports exist within a large regional biosphere whose ecological complexity affects the circumstance of flights in and out of a city.

“Airports force us to think of landscape architecture in very expansive and multilayered ways,” he said. “An airport is really a whole region, not just a runway with a chicken-wire fence around it.”

So landscape architects have to look up, look out, and look wide — 100 miles at least — to see where birds feed and roost and where they are prey. They also need to see airports as models of other built environments — shipyards and ports, for instance — that contain both static and mobile elements.

In the end, said Duempelmann, whose book “Flights of Imagination” about the impact of powered flight on landscape architecture publishes next year, airports serve as metaphors for the future of design. An airport is an ecologically complex urban site in a world of vanishing developable land. It illustrates the frictions and interconnections between what is natural and what is built. “It’s a good site,” she said, “to make people aware of ecology.”