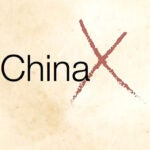 Exhibit a window into belief and loss during the Civil War

An exhibit now on view at Harvard Divinity School’s (HDS) Andover-Harvard Theological Library offers an intimate look at some of the religious dimensions to the Civil War, as well as a sense of the deep involvement of Harvard alumni in the nation’s bloodiest conflict.

The show contains a selection from the library’s holdings of hundreds of pamphlets and other documents printed during the Civil War period, many of which have been digitized in connection with an ongoing preservation project.

On the library’s second floor, two glass cases and two wall displays hold song and prayer books that were likely used by chaplains and soldiers, as well as a series of Civil War-related sermons and several eulogies delivered in honor of Harvard men who sacrificed their lives on the battlefield.

“The chaplains of the Union army were populated with large numbers of Harvard-trained clergymen,” said David F. Holland, an associate professor of North American religious history at HDS.

Among those fallen Harvard alumni was Arthur Buckminster Fuller, grandfather to the famed inventor Buckminster Fuller and brother to women’s rights advocate Margaret Fuller, who graduated from Harvard College in 1843 and from HDS four years later. A chaplain in the 16th Regiment of the Massachusetts Infantry, Fuller was honorably discharged from his post on Dec. 10, 1862. The following day, while still with his regiment, he was killed at the Battle of Fredericksburg.

The library’s holdings include a version of “A Life Sketch of a New England Clergyman and Army Chaplain” by Fuller’s brother, Richard Frederick Fuller.

Fuller’s tribute to his brother is “indicative of the valuable historical archival material this exhibit is offering,” said Holland.

Among the exhibit’s many memorials is a touching tribute to Henry Ware Hall, a member of the 51st Regiment, Illinois Infantry, who attended Harvard in 1856. Ware died in 1864, at age 24, “while rallying the troops on June 27, in the assault on Kennesaw Mountain.”

Ware’s memorial, delivered by Thomas B. Fox in the First Church, Dorchester, Mass., on Sunday, July 17, 1864, begins: “Henry, — you will allow me to call him familiarly by his Christian name, the name we best knew him by, — for I cannot use studied phrases, or be formal now, — Henry has also ‘died for his country.’”

Several of the sermons in the show reflect the national sentiment following the assassination of the country’s 16th president. As the exhibit’s accompanying text notes: “Abraham Lincoln was shot on Good Friday, April 14, 1865, and died the next morning. In many pulpits on Easter, April 16, instead of joyous sermons about the resurrection of Jesus, there were somber reflections on the death of the President.”

For Cliff Wunderlich, the exhibit and digital archive serve as an important reminder not only of the Civil War’s brutal toll, but also its proximity. “It’s easy to dismiss it as ancient history,” said Wunderlich, head of research services and curator of digital collections at Andover-Harvard Theological Library. “But it’s something that has to be faced.”