The poetry of water 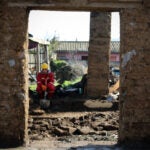 Yemen’s strife, growth cause anthropologist to shift course to help

It was poetry that first brought Harvard anthropologist Steven Caton to Yemen in 1979, and it was war that brought him back in 2001.

But it has been water that has kept him there since.

Caton, the Khalid Bin Abdullah Bin Abdulrahman Al Saud Professor of Contemporary Arab Studies, first visited the nation’s tribal regions for his doctoral work. He lived for almost two years in a “sanctuary” town between tribes in what was then North Yemen, talking to tribal poets, attending ceremonies, and recording the verses he heard.

His singular focus on poetry was shattered, however, by the abduction of two girls from one tribe by a young man from the sanctuary, a move that sparked a tribal war that involved players from across the country.

After leaving Yemen in 1981, Caton completed his doctoral work at the University of Chicago and began teaching. He published three books, including 1990’s “Peaks of Yemen I Summon,” on the nation’s poetry, and 1999’s “Lawrence of Arabia: A Film’s Anthropology,” which examined the famous movie from an anthropological perspective. It was the third title, 2005’s “Yemen Chronicle: An Anthropology of War and Mediation,” that reacquainted him with the land that had been so formative for his career, and that set him on the path he treads now.

With the Middle East in turmoil and Yemen experiencing on-and-off fighting, Caton hadn’t been back in decades.

In 2001, he had returned to Yemen to conduct research on the tribal war. During that trip, Caton was shocked at the changes — chronicled in his 2005 book, along with his notes and memories from his first visit — that the intervening years had wrought. The capital city, Sana’a, had greatly expanded and modernized. Water, which had not been in short supply during his fieldwork, had become scarce.

In the countryside, water shortages had led farmers to abandon their fields and move to the city. And in the city, increased demand for groundwater had lowered the water table and dried up the gardens and fruit trees that had made Sana’a not just a beautiful and ancient capital, but a green city in a dry part of the world. The nearby wadis, or small valleys, where city dwellers had found shady respite from the city’s madness, had been developed or dried up.

“What shocked me was the water situation,” Caton said. “Entire valleys were abandoned because they either didn’t have the money to drill deep enough to get water or it was not good enough quality to use for cultivation.”

The visit launched Caton in a new academic direction, away from poetry and film into the nuts-and-bolts subject of water in a part of the world where it had never been plentiful.

“I started as a linguistic anthropologist specializing in language and symbolism. I never dreamed that 30 years later I’d be working on such a material substance as water,” Caton said. “It’s been a surprise, and a pleasant one, that one can reinvent oneself. It’s been both fun and interesting.”

Though the Arabian Peninsula is dominated by the vast Rub’ al-Khali desert, Yemen contains highlands that have traditionally gotten enough rain to support a thriving agricultural sector. Though dry by global standards, Yemen over the millennia had become something of the breadbasket of the Arabian Peninsula, Caton said.

That was possible because of Yemen’s long tradition of water engineering. Its highlands receive the most rainfall on the peninsula, but much of it falls during seasonal monsoons. Traditional Yemeni agricultural practices emphasized retaining water through extensive terracing on hillsides and through ancient engineering works, such as the enormous Marib Dam. Built around 1700 B.C., the 1,900-foot-long dam wasn’t intended to block and store the flow of a particular river. Rather, it was strategically placed to capture monsoon runoff from nearby mountains, and store it for later use in irrigation.

Since 2001, Caton has returned to Yemen several times, including a sabbatical year in 2005-06 spent getting his water project under way and teaching anthropology with a colleague at Sana’a University.

One frustration for Caton has been the inability to travel safely into the countryside. He has had to center his research in Sana’a, and has spent a lot of time interviewing people prominent in the nation’s water bureaucracy and the international actors who advise them. Caton’s work examines the interplay of those two groups of officials: Yemenis with a long history of water management and self-sufficiency who suddenly find themselves in need of outside assistance, and the international advisors, mainly from the Netherlands, who are devising sustainable water programs.

The Dutch system, called Integrated Water Resource Management, assumes there are no new water sources to be tapped and instead focuses on conserving and using current supplies efficiently.

“There might be some desalination, but you have to figure out how to use the water you have,” Caton said.

His work also entailed a trip to the Netherlands to understand why the Dutch often serve as international water engineers. Having held back the seas for hundreds of years and maintained an empire in arid regions where irrigation was essential, the Dutch began exporting their water engineering expertise after World War II, Caton said.

Water is scarce everywhere on the Arabian Peninsula, but the attitudes toward and issues surrounding it are diverse. Saudi Arabia’s water is mainly found in oases, which are often the sites of date plantations. The Gulf countries are traditional traders, oriented to their port cities and the sea. They augment scarce freshwater supplies by using their oil wealth to build desalination plants.

Water, that essential, everyday substance, connects disparate segments of society as well as far-flung geographical corners, Caton said. It even, through traditions of water management passed down over generations, spans time.

“Anthropology, because of its ethnographic approach, its field-based approach, its method, and way of thinking, is particularly suited to study this messy substance called water,” Caton said.

He recently heard from a friend who is a water specialist in Yemen. He told Caton that to reach people, a water conservation campaign drafted poems modeled after traditional Yemeni style patterns.

“They produced poetry on the water issue,” Caton said. “It exactly draws on that tradition that tribesmen know. It’s come full circle.”