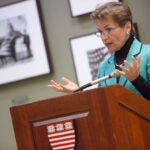 UMass professor, photographer record wonders of an area under siege

Kamal Bawa’s journey to understand and protect the biodiversity of the towering Himalayas began half a century ago, when he was young and traveling into the fabled mountain range’s eastern foothills.

Though desolate snow and ice lay above, his train climbed through lush valleys, rich with tree species and a dazzling array of orchids, and past high meadows marked by pale, 6-foot-tall formations that only on closer inspection turned out to be plants. They were Rheum nobile, a type of rhubarb whose translucent leaves create greenhouse-like warm pockets that attract insects for pollination.

Bawa’s journey continues today. A distinguished professor of biology at the University of Massachusetts, Boston, Bawa has teamed up with photographer Sandesh Kadur to create an account of biodiversity in the Himalayas, including the region through which Bawa traveled so long ago. The result is a book, “Himalayas: Mountains of Life,” released in April.

Bawa and Kadur, who is a National Geographic emerging explorer, talked about the journey that led to the book on Tuesday during a lecture at Harvard’s Sackler Museum. The event was introduced by Heather Henriksen, director of Harvard’s Office for Sustainability, and hosted by William Clark, Harvey Brooks Professor of International Science, Public Policy, and Human Development, and director of the Harvard Kennedy School’s Sustainability Science Program.

The years since his first visit have proven Bawa’s instincts about the region’s richness to be true. It is now known as one of the world’s biodiversity hotspots, which are areas of extreme species diversity endangered by pressures from humanity. The region holds, for example, 500 species of orchids, more than 100 species of primulas and rhododendrons, as well as rhinos, elephants, tigers, and red pandas. Between 1998 and 2008 alone, 350 new species were described there.

Bawa and Kadur spent a great deal of time in the 1,000-mile-long region, interacting with the rich diversity of its human residents as well its plant and animal species. Kadur recounted the long journeys to reach some locations, as well as the patience needed to snap the wildlife images to illustrate the project. In one instance he spent seven days in a blind waiting for tigers to appear at a rhino carcass. He was rewarded for his patience on the seventh day when not one but three tigers appeared and began eating, demonstrating scavenging behavior never before documented.

“Getting to many of these places was a task in itself,” Kadur said.

Bawa and Kadur hope to draw broader attention to the region, as they did with a prior book on another Indian mountain range, the Sahyadris, also known as the Western Ghats, along the Arabian Sea. That book, Bawa said, attracted attention from political leaders and policymakers and allowed the authors to describe the conservation challenges there.

The Himalayan region is under pressure from the millions of indigenous people who live there, whose agricultural practices are fragmenting forests and who sometimes hunt rare animals (30 rhinos were killed in a single day in September). The area is also under pressure from modern development.

India alone is planning 400 dams on its side of the Himalayas, Bawa said, while China is planning 400 on the other side. Though hydropower provides clean energy, it also prompts road building into wild areas, changes the nature of rivers, and affects both the region’s hydrology and the species dependent on their free flow.

Climate change appears to be another threat. Between 1982 and 2006, average temperatures in the region have increased twice as fast as global temperatures, while rainfall has increased by an average of 163 millimeters (nearly 6½ inches) and become more variable. The growing season, meanwhile, has advanced by about five days, Bawa said.

“The richness of life in the Himalayas, as in many other places, is under assault,” Bawa said.