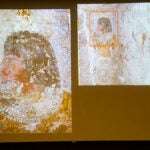 The queen and the sculptor

Sophisticated site gathers her poems, in her handwriting, for all to see and study

A biographer once praised reticent and retiring Emily Dickinson for “the modest littleness of her person.”

So what might this 19th-century poet make of the decidedly immodest archive of her poems being released today, bringing to light in one digital place most of her surviving manuscripts?

What if those manuscripts were the very ones Dickinson hesitated to publish in her own lifetime, or — in bursts of cheerful immodesty — delivered to friends with fresh gingerbread or a bouquet of flowers? What if that archive revealed, in every variant, all of her known poems? And what if it showed the world how her handwriting began to slope and sprawl as she got older, and that she sometimes wrote poems on old bills, paper bags, or the backs of envelopes?

Dickinson can’t answer such questions. But her poems keep speaking, and her readers keep listening and interpreting her timeless celebrations of wit, observation, and the fragile ecstasies of the natural world.

Interpretation will be easier with the new Emily Dickinson Archive (EDA), which goes online today at edickinson.org.

The EDA is an open-access digital archive, available free to anyone. It collects many surviving manuscripts of the slight, shy poet who once called herself — with considerable irony — “the Belle of Amherst.” Scholars and readers will be able to compare one manuscript with another; previously, they were separated by institutional divides.

In Emily's own hand

Two years in the making, the EDA is a collaborative project of Harvard University Press and a growing number of repositories that own examples of Dickinson’s original work. The biggest are Houghton Library, Amherst College, and the Boston Public Library.

Houghton contributed 1,820 manuscript images to the EDA, Amherst put in 1,670, and the Boston Public Library 643. The next-biggest contributor, with 45 images, is Yale’s Beinecke Rare Book and Manuscript Library.

To put these numbers in perspective: There are 1,789 known Dickinson poems. But that number is still “fluid,” said Morris, because additional poems may be in private hands, unexamined.

Dickinson scholar Martha Nell Smith of the University of Maryland, a member of the EDA advisory board, said the new archive will make scholarship easier. Until now, anyone interested in seeing Dickinson’s poems had search for and request manuscript images place by place. “Instead of doing that now,” she said, “I can go online.”

Smith was an early believer in the power of digital critical inquiry and in 1994 opened the Dickinson Electronic Archives, one of at least four sites that employ online tools in critical inquiry into the poet. Back then, doubt in the digital went deep among scholars, she said. “People told me I was insane.”

Bringing the EDA’s collaborating institutions together sometimes required overcoming wide-ranging jealousies of ownership and presentation that themselves dated back to the 19th century — “an immensely complex task,” said EDA board member Marta Werner, a Dickinson scholar at D’Youville College in Buffalo, N.Y.

The feuds were real, went deep, and lasted generations, said Smith, who has scholarly insights on the topic, adding, “I’ve made my profession reading these people’s mail.” For background, she pointed to Chapter 17 of Lyndall Gordon’s 2010 book, whose title tells all: “Lives Like Loaded Guns: Emily Dickinson and Her Family’s Feuds.”

Morris preferred to look ahead. This is just the beginning for the EDA, she said, calling the startup “phase one” of a project she hopes will become a template for open-access research resources. Morris also hopes the EDA will become the primary digital clearinghouse for Dickinson researchers. There are more digitized, autograph images out there, she said, and “our goal is to get them all.”

But Morris cautioned that the site is only meant to be a neutral online space for gathering manuscripts. “We want to facilitate the scholarship,” she said, “not make the scholarship.”

Some scholars politely disagree. “Archives are not neutral spaces,” said Werner, “and the presentation of documents is to some degree interpretive.” But she praised the broader mission of the EDA, its “stunning” color images, its zoom feature that allows scholars to peer at stab binding holes and other manuscript oddities, and the digitally enhanced ability to compare one edition’s text with another’s.

“Morris was far-sighted enough to see this future, and to move us closer to it,” said Werner.

Cristanne Miller, a Dickinson specialist at the State University of New York at Buffalo and an EDA board member, called the archive “an extraordinary gift to Dickinson scholars, teachers, students, and general readers around the world.” There is debate over how to read the manuscripts, but “these are the poems as Dickinson left them to us,” she said, complete with an “aura” of the author and clues to the puzzle of how she constructed a poem.

Miller is preparing a readers’ edition of Dickinson poems for Harvard University Press (HUP), a key player in the EDA venture and the main source of the electronic archive’s scholarly commentary and transcribed text. (There is no way yet to digitally search handwriting.) In the past 50 years, HUP has also published the authoritative

In 1955, HUP published “The Poems of Emily Dickinson,” edited by Thomas H. Johnson. Though many of the poems had appeared somewhere in print by 1945, this work was the first attempt at a comprehensive collection. “The Manuscript Books of Emily Dickinson,” edited by R.W. Franklin, followed in 1981. It revealed to the world more than 800 poems bound into 40 “fascicles,” hand-sewn books Dickinson made to bring order to her writings. Most were dated by him from 1858 to 1864.

In 1998, HUP published Franklin’s three-volume variorum edition of “The Poems of Emily Dickinson,” a work that includes the poet’s alternative readings, revisions, and variants.

The Franklin and Johnson texts are the scholarly fundament of the EDA, a textual feature of the site that Werner and others hope will be expanded. But the EDA also includes the complete text of four editions of her poetry in the public domain, books that show, beginning in 1890, how Dickinson was first presented to the public.

A phase two of the project should help in that regard, and Morris thinks it is possible, as long as the site’s users find the EDA useful and more funding can be captured. (To date, EDA’s financial support comes from Harvard Library’s Sidney Verba Fund, Houghton’s Emily Dickinson Fund, and HUP.)

The heart of phase two would include digitized Dickinson letters; 1,049 are known, with 99 correspondents. (Smith speculated that as much as 90 percent of Dickinson’s correspondence is lost, and with that poems that will never see the light of day.) A phase two would also link to other modern Dickinson collections, expand metadata, and add online image-navigation tools.

If there is a phase three for the EDA, it might focus on Dickinson artifacts, Morris said. Houghton owns the poet’s teacups, along with her tiny cherrywood writing desk and much of her library.

Meanwhile, visitors to edickinson.org can use the zoom function on poems, call up scholarly annotations, compare transcriptions, download images for free (as long as credit is given to the right repository), and sign on to take their own digital notes.

For now, such annotations would remain private. Elsewhere at Harvard, curators are experimenting with the idea of shared annotations that might create communities of online scholars, both professional and amateur. One example is the Oliver Wendell Holmes Jr. digital suite at the Harvard Law Library.

“I think it’s great,” said Smith of the prospect for shared annotations and amateur scholarship. “I have been arguing for this for years. ‘Untrained eyes’ can see things that sometimes my overtrained eyes can’t see.” In the context of Dickinson, crowdsourced research might be valuable “if it’s curated and handled well.”

But that would be the future. Viewers of the EDA also can search the texts of poems, either by first lines or by typing in one of the more than 9,275 words Dickinson employed. Contemporary meanings of each word are available by incorporating the work of another partner, the Emily Dickinson Lexicon at Brigham Young University.

Through the green slats

Manuscripts are the place to start for understanding how Dickinson made her poems. Fewer than a dozen were set in type in her lifetime, and only one with her permission. “Success is counted sweetest” appeared in “A Masque of Poets,” an 1878 collection of anonymous verse. Dickinson had unconventional approaches to “publishing,” a term she distinguished from “printing.” She viewed setting a work in type as an act that took a poem’s life away. Wrote University of Wyoming scholar Jeanne Holland: “She resisted the inflexibility of print.”

“I had told you I did not print,” Dickinson bristled in an 1866 letter to a friend. A few years earlier, in 1862, the same resentment echoed in these lines:

Instead of the stillness of print, Dickinson favored the action of sending a penciled poem out to a friend, along with a gift. People often ask: Why didn’t Dickinson publish her poems? “She did,” said Smith in answer. “She sent her poems out in her letters.”

But following her death in 1886, conventional publishing was the means at hand. A first volume of her poetry appeared in 1890, touching off a rush to print more, in 1891, 1896, 1914, and onward. It’s that enduring drive to know Dickinson better that the EDA is trying to capture.

Because the archive is not tied just to what can be set in type, it might help to understand Dickinson’s methods for self-publishing. After 1864, she wrote on whatever was handy in her busy household. She found time at night, early in the morning, or while baking bread or skimming milk to scribble on notepaper, discarded bills, paper bags, and old programs. (Werner co-authored “The Gorgeous Nothings,” a book about poems that Dickinson wrote on the backs of envelopes.)

In an essay, Holland called these scraps the poet’s “own domestic technologies of publication.” They were often multimedia artifacts too, wittily combining paper and handwriting with stamps, clippings, pressed flowers, and other items. (Houghton owns one poem pinned with a rose.) “Playfulness organizes much of Dickinson’s late writing,” Holland wrote, “an aspect easy to miss when we do not see the manuscripts.”

If the “technologies” of the poet’s later manuscripts were domestic, so were her sensibilities. Dickinson willingly shut herself into a house, but it wasn’t the closet metaphor of her childhood. It was a place that made possible quiet engagement with the natural world around her.

“I know that Emily Dickinson wrote most emphatic things in the pantry, so cool and quiet,” remembered a friend in 1904. “The blinds were closed, but through the green slats she saw all those fascinating ups and downs going on outside.”

With Dickinson gone, and only her manuscripts left to represent her, scholars and all can only peer through green slats again — not quite seeing, but doing so with joy.

They also can pore over manuscripts, metadata, comparison texts, and annotations. “She’d be very amused by us,” said Smith. Or perhaps Dickinson would simply remind us that searches for meaning in art can only go so far. She wrote in 1879:

To see the Summer Sky
Is Poetry, though never in a Book it lie —
True Poems flee —