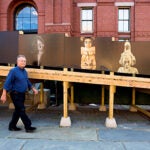 The poetry of water

Crouching in the bush, an AK-47 machine gun poised at the ready, an African boy is a portrait of icy detachment as he considers an interloper. It’s the now-hardened image that has come to symbolize the recruitment of children into armed conflicts since the 1990s.

Experts say that outdated and narrow picture obscures present-day conditions, where both boys and girls are deployed in war not just in Africa, but also Asia, Latin America, and now Syria, where civil war has raged since 2011. While global pressure to curb the use of children in combat has worked in some places, the persistent challenge for local governments and international organizations such as the United Nations is to find ways to integrate damaged former soldiers back into the communities they were led to violate and abandon.

Ishmael Beah, a former child soldier in Sierra Leone and the author of “A Long Way Gone: Memoirs of a Boy Soldier,” said that too often the signing of resolutions has been the primary focus of many intergovernmental organizations, and that more practical approaches are needed.

“A lot has been done on paper about what can be done and how can we address the issue. But where the problem lies … is in the implementation of some of these things,” Beah said during a panel discussion Monday evening at the Harvard Kennedy School’s JFK Jr. Forum. “Oftentimes when they sign these things, they don’t even have the capacity to implement them.”

Leila Zerrougui, the U.N.’s special representative of the secretary-general for children and armed conflict, agreed that the successful reintegration of former child soldiers has been more complicated than first understood. But she defended the resolutions, saying the documents provide vital recognition by both the international community and local governments that using children in armed conflict is unacceptable. She said such resolutions also lay the groundwork for future action.

“All this is true. And I’m not saying everything is perfect,” she said. “Every day I see the report that [shows], still, children are being recruited. But we can do more, and all of you can help us in making it better and more efficient and effective on the ground.”

Beah now works with the United Nations Children’s Fund (UNICEF) as an advocate for youths affected by war and is a member of Human Rights Watch Children’s Advisory Committee. He said that little progress has been made to improve or expand the economic opportunities for former soldiers and others in war-torn communities. Many of the same lackluster offerings that existed when he left the war in the mid-’90s are still being promoted by NGOs and others, he said, without input from local communities.

“There’s no market research to really determine what is it that can yield better economic opportunity for people coming out of war,” Beah said. “We were sitting there, some of us, thinking, ‘How come nobody is asking us?’ But nobody is interested in engaging them about, practically, what they want to do because I think there’s this assumption that maybe because they’ve been through war that we don’t have the intelligence to actually think about our situation.”

He later added, “People who have survived these wars are remarkably intelligent because it takes intelligence to survive the kind of situations they have survived.”

Given the lasting mental and physical trauma to child soldiers and others in conflict areas, as well as the lack of basic resources, it is clear that outside efforts need to be much more thoughtful and long-range, said Jocelyn Kelly, director of the Harvard Humanitarian Initiative’s Women in War program.

Kelly introduced a new report on the difficulties that former child soldiers in the eastern Democratic Republic of Congo have experienced trying to rejoin communities they had left. In addition to traditional interviews and data-gathering by public health researchers, the report includes photo essays and illustrations by former child soldiers that map the damage done by war to their bodies and their lives.

“I think the entire model of the way that we do integration programs has to be much more holistic — not only with the individual but with the community,” Kelly said, noting that in her research she encountered ill-conceived programs that gave sewing machines to people in communities with no electricity and single male goats to boys who were encouraged to start goat farms.

Until humanitarian organizations fully engage local communities in decision-making and help them to become self-sufficient, the malevolent forces that first prompted children to become soldiers will return, Beah said.

“The only way this is going to work is to empower government to build those structures that have been destroyed before the war … and to build those institutions so that they are able to do this work on their own,” he said. “NGOs, U.N. agencies should be training governments to do the work that they’re doing. Because if you don’t do this, then the alliances will continue and then these things just become cyclical.”

The “Caught in Conflict” discussion was part of “Humanity Explored” a monthlong series of lectures and multimedia events to be held across Harvard to consider the role that visual storytelling, art, and design play in the push for human rights in conflicted regions around the globe.