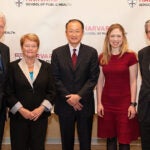 Michael D. Smith formally launched the $2.5 billion Harvard Campaign for Arts and Sciences on Saturday morning at a standing-room-only alumni event at Sanders Theatre. The gathering was followed by a series of symposia highlighting the faculty’s commitment to teaching, groundbreaking scholarship, and the residential learning model.

In his remarks, Smith, the Dean of Harvard’s Faculty of Arts and Sciences (FAS), emphasized the transformative power of the University’s commitment to leadership in learning.

“At Harvard, we like to say that learning happens everywhere, not just in the classroom,” said Smith, the John H. Finley Jr. Professor of Engineering and Applied Sciences. “Intellectual stimulation abounds on our campus, pours out our gates to make a difference in the community, nation, and world around us. We keep pace with the world through the use of greater technology in our teaching and research. But we must continue to grasp for the magic that happens when the most promising students and the most talented faculty come together.

“This is what makes Harvard unique, what fuels its broad-based excellence, what generates the incredible creativity, innovation, and ideas overflowing every seat and stage at Harvard,” Smith continued. “This is at the heart of our Campaign for Arts and Sciences.”

Part of the $6.5 billion Harvard Campaign, the Campaign for Arts and Sciences celebrates Harvard — particularly Harvard College, the Graduate School of Arts and Sciences, and the School of Engineering and Applied Sciences (SEAS) — as a place of discovery for people leading positive change in the world. Its priorities, organized around six themes, strengthen core commitments and make important investments for the future:

The Harvard Campaign for Arts and Sciences celebrates Harvard as a place of discovery for people leading positive change in the world. This video honors the many discoveries our students and faculty make each day—and the impact those discoveries have on individuals and the world. These personal stories highlight Harvard’s special ability to create leaders, advance knowledge, improve learning, and inspire discovery.

Each of the six campaign priorities, Smith said, concentrates on a simple concept: “making sure Harvard continues as a place of discovery for people leading positive change in the world. Scientists and scholars, poets and entrepreneurs: that’s our heritage, and our future.”

President Drew Faust spoke of the importance of FAS as part of One Harvard, lauding the world-renowned intellectual dynamism that grew out of a small college on the frontier of colonial Massachusetts.

“What we are here to celebrate and support today — Harvard College and the Graduate School of Arts and Sciences — is where the University began,” said Faust, Lincoln Professor of History. “This is where humble, experimental, daring little Harvard originated. And what has blossomed here ever since has fundamentally shaped Harvard’s character, its progress, and its vital aspirations — not to mention the wider world.”

In launching the campaign, Faust said, Harvard is pursuing “a future ripe with possibility and filled with change. This is a campaign about resources. But far more that that, it’s a campaign about … the singular role of this University in educating the citizens and leaders of tomorrow, and in spurring the quest for deep knowledge and deeper understanding in a world fraught with challenge, and thirsty for powerful ideas.”

Earlier in the week, SEAS, one of the four Schools that make up FAS, convened supporters and friends at a separate launch event, at which Faust highlighted the importance of a strong school of engineering and applied science in a world-class university. SEAS Dean Cherry A. Murray also outlined the School’s campaign priorities: support for faculty, graduate students, innovative pedagogy, and targeted academic and research initiatives.

Emphasizing the combined strengths of a rigorous engineering program embedded in a diverse liberal arts environment, Murray said: “The most vexing problems of the 21st century will involve technology in their solutions, but none can be solved with technology alone. It is vitally important that future engineering leaders — and leaders in any field — understand not just the technical possibilities, but also the human and societal context of these solutions.”

Following Saturday morning’s program at Sanders, more than a thousand Harvard alumni spread out across Harvard Yard to attend symposia at which prominent faculty members discussed topical issues in scholarship and teaching.

Dean of Arts and Humanities Diana Sorensen led a panel on the role of the arts and humanities in society, while Dean of Science Jeremy Bloxham moderated a discussion about how basic research can solve critical questions from climate change to disease.

Other sessions focused on issues such as biological influences on human behavior, real-world applications for foundational scientific research, the role of residential education in an online world, and how the College’s financial aid program enables extraordinary people from all backgrounds to choose Harvard.

In a packed lecture hall at the Science Center, Professor Gary King led a group of faculty members as they reflected on how the ability to compile vast quantities of information, through improved technology and new tools for data collection, is being used to answer questions about everything from health and medicine to the Milky Way.

“Big data is not about the data. The value is in the analytics,” said King, the Albert J. Weatherhead III University Professor and director of the Institute for Quantitative Social Science. To illustrate the point, King and his team of social scientists, statisticians, and graduate students recently used computer algorithms to analyze 64,000 senatorial press releases, determining that 27 percent of them were more about partisan taunting than problem solving.

“Science is about inferences,” King said, “it’s about using data you have … to learn about data you don’t have.”

Tim Kaxiras, John Hasbrouck Van Vleck Professor of Pure and Applied Physics, is leading a pedagogical method that extends big data inferences into the classroom. “I’m really passionate about infusing what we do in the lab and in our research into the classroom and educating our students, both undergraduate and graduate levels,” he said. “There is a recent effort to infuse regular courses with computational science components.”

Kaxiras pointed to his Physical Sciences 12B course, which teaches traditional physics subjects through analytical and experimental perspectives that allow students to visualize electrical magnetic fields in clearer ways.

Across the Yard, Professor Peter Bol, Harvard’s new Vice Provost for Advances in Learning, joined in a discussion about how the Harvard classroom is evolving in response to a generation of “digital native” students with creative pedagogical experimentation, new methods of assessment, and the introduction of HarvardX. Because his HarvardX course on China offers pre-recorded lectures online, Bol said, actual classroom time can be devoted to in-class discussion — and students have responded with vigor.

“We spend the whole hour talking with students, and we have extraordinary, nonstop discussions — everyone wants to participate,” said Bol, the Carswell Professor of East Asian Languages and Civilizations. “What comes out of that, I think, is a more engaged student body … one of the skills students now learn [as a result] is to participate, to speak their minds, to listen to each other and respond to one another. And we thought, how could we help our online students around the world to participate in the discussion, too?”

The solution Bol decided on for his class was to tape the in-class discussion and then cut the video into segments, allowing a natural pause in the discussion. The online students were then prompted to have their own discussion, after which they could see how Harvard students and faculty concluded the classroom discussion.

While the impact of technology on learning is clearly far-reaching, Bol said, it’s also deeply personal. “For me, as a teacher at this point in my life, it’s been a wonderfully renewing experience,” he said. “And for the students, it’s been deeply engaging.”

For panelist David Malan, senior lecturer on computer science and instructor for Harvard’s popular Computer Science 50 class, access to online learning has revolutionized the teaching model, as well as CS50’s size. The class currently has 150,000 online students through edX.

Such online resources, Malan said, have allowed faculty to “give students tools that allow them to navigate a fairly complex subject much more effectively. And I daresay we can produce CS50 better through this convergence of online and offline presentation of material than we could ever do on-campus only, or off-campus only. What this gives us is a mode of interacting differently with students … it’s no longer just seeing someone like me talk at you. It’s much more dynamic.”

An attendee at the Leading and Learning symposia, Brad Gronek, A.L.M. ’05, said that the launch had done a great job of distilling what the campaign is trying to achieve: combining the best students worldwide with the best teachers.

“The expansion that they’re working on will ensure that Harvard will stay the best university in the world, even in a world of change,” Gronek said. “The Harvard community will grow over the next few years, and people will really feel the connection that Harvard students have. … Those connections are much deeper than people can possibly imagine.”