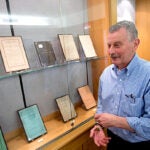 The recent launch of the Healthcare.org website, the online portal for the Affordable Care Act (ACA), has been riddled with technical glitches and delays, frustrating users and insurers, and prompting many lawmakers to point fingers and others to suggest delaying the open enrollment period. While the glitches might look bad from a political perspective, a Harvard Kennedy School (HKS) professor argues that they’re just as bad from a health care perspective.

“If I am really sick I am more willing to fight through the hassle of getting insurance,” said Joseph Newhouse, the John D. MacArthur Professor of Health Policy and Management at HKS. “If the rate of good risks [persons who will not use much medical care] not signing up exceeds what insurers thought when they set premiums, there could be a spike in premiums on the exchanges for 2015, which in turn would require an increase in federal subsidies.

“Second, to the degree there are IT problems on the so-called ‘back end’ — that is, the accuracy of information from the exchange to individual insurers on who is enrolled with them and what policy they are enrolled in — there could be problems with improper denial of claims or overpayment of claims,” he added.

“Finally, most products on the exchanges are so-called ‘narrow-network plans,’ which means a previously insured person who now buys on the exchange may find that their doctor or the hospital they were previously using is out-of-network.  Right now, it is hard on many exchanges to find information on which doctors and hospitals are in-network, and there are claims that some of the information that is on some of the websites is inaccurate.  This could lead people to choose plans that they would not have chosen had they had more complete information.”

“At the moment, the growth rate of cost is extraordinarily low by historical standards, but no one knows to what degree the current slowdown will continue,” said Newhouse. “A second challenge is keeping political support for the redistribution of income that is part of the ACA.”

Is there light at the end of this tunnel? Newhouse’s forecast is mixed.

“I am confident that in time the IT issues will be addressed and that coverage will expand. I am also confident that cost growth will slow relative to historical standards, because the consequence in terms of what is available for non-health spending, both in the public and private sectors, is so large,” he said. “I am not at all sure, however, about the mechanisms that will lead costs to slow, nor about the health consequences of any such slowing.”