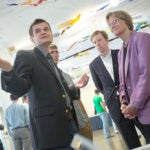 Harvard junior Wesley Saunders has been named to the 2013 Lou Henson Preseason All-America Team, as announced Wednesday by the award committee.

Saunders was a unanimous first team All-Ivy League selection a year ago after leading the Ancient Eight in scoring at 16.2 ppg. The Los Angeles native was also tops in the league in steals (55), third in field goal percentage (52.2) and minutes (37.3), and was seventh in assists (3.5).

Saunders scored in double-digits in 29 of 30 games while leading the Crimson to the third round of the NCAA Tournament and a third straight Ivy League title. An NABC All-District first team pick, Saunders picked up five Ivy League Player of the Week honors.

The Lou Henson Preseason All-America Team is composed of 25 student-athletes from mid-major conferences. Following the season, the Lou Henson Award is presented annually to the top mid-major student-athlete in Division I college basketball. The award is named in honor of Lou Henson, who retired after a spectacular coaching career that lasted 41 years.