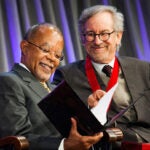 Architecture and its echoes provide glimpses into 20th-century epoch

South Korea has the world’s 15th largest economy. The capital, Seoul, is a sprawling high-rise megacity of 10 million. From the air, Seoul’s Gangnam District alone — with its glittering verticals of glass and steel stitched with superhighways — looks like the pinnacle of modernity.

Yet South Korea’s architecture is little studied outside its own borders. When scholars ponder the built environment of East Asia, they still do so through the lens of Japan.

A recent conference at Harvard’s Graduate School of Design (GSD) provided a corrective gesture. “(Un)Building Colonial Space in Korea, 1910-1945” was the first conference at a North American architecture school for scholars exploring the intersection of Korean architecture and history. The session asked: What can cultural uses of space, landscape, and the built environment teach us about the past?

The interdisciplinary gathering explored new ways of seeing architecture, beginning with South Korea, through the lenses of history, literature, archaeology, and other disciplines that touch on spatial dimensions. It was sponsored by the Korea Institute, with help from AsiaGSD, the Harvard Korea Society, and KoreaGSD.

“In the context of art and architecture school, you don’t touch on Korea at all,” said conference organizer Melany Sun-Min Park, a candidate for a master’s degree in design studies. “The modern tradition of architecture from the West went to Japan first. So when we study East Asian architecture … we learn Japanese modernism, but it stops there.”

Park was educated in New Zealand and Singapore before coming to Harvard, and in every place Japan has been the focus, without much attention paid to most of the fiercely modern cities known as the “Asian Tigers.” Park hopes to be “part of the first generation” to bring Korean architectural history to the English-speaking world.

Helping her with the conference were two Harvard faculty advisors, Yukio Lippit, an art historian of Japan and Harris K. Weston Associate Professor of the Humanities, and Timothy Hyde, associate professor of architecture at the GSD.

The conference on Sept. 27 jammed a first-floor lecture room in Gund Hall. The big crowd might be traced to the emphasis that Park chose for her four invited guest lecturers, namely the 1910–1945 colonial era, during which Japan’s imperial ambitions cloaked historical Korea in an overlay of modernism. In those years, Tokyo was the metropole of East Asia, the Oz-like mother city for the region, and a place that was believed to express spatial and cultural modernity at its best.

In many cases, Korean travelers to Japan looked back at their own country and by and large felt like hicks. Issues of urbanism and space in Korean architecture provide insight to “ways in which Korean history unfolds,” said Lippit of the conference. “It’s exciting.”

One of the lecturers, Hyung Il Pai, Ph.D. ’89, used a circa-1925 image of a 14th-century gate in Seoul to illustrate how traditional architectural features were co-opted by the Japanese to redefine Korea as part of its modernized colonial sphere.

Namdaemun (the Great Southern Gate) is a wood-and-stone structure topped with a pagoda-style roof. During colonial times, it commonly appeared in Japanese tourist guidebooks as a symbol of old Korea. The gate offered a “standardized image of the colony,” Pai wrote to Park. The conquered territory was reimagined by the Japanese as “a pristine, empty and unpolluted destination ripe for exploration, adventure, and colonization.”

The four speakers were scholars of literature, the visual arts, and intellectual history. They were not practicing architects, a reflection of the conference’s attempt to see Korea’s built environment through textual and visual records of the colonial experience, a time in history that “people can still understand,” said Park.

Pai, a cultural historian at the University of California, Santa Barbara, led with a lecture on photographic records of famous places, like Namdaemun, and how they became part of the “tourist imaginary” in colonial Korea. The dramatic old gate “shows off a standard postcard convention,” she told Park, “a well-maintained architectural façade” set off by clean streets, grand buildings, and busy railways.

Cornell professor Ellie Choi, Ph.D. ’09, a scholar of modern Korean culture, used literature as her window into the colonial era, calling fiction, poetry, and travel accounts “the best excavation site for everyday practices of the colonized.” Central to her inquiry was the fiction of Yi Kwangsu, the author of Korea’s first modern novel, “The Heartless” (1917), and a Japan-educated intellectual attracted to the idea of a modernized Korea.

Today he is controversial for his late-life reputation as a Japanese collaborator, but his early work, said Choi, gave his colonial Korean readership a vision of a modernized Seoul as the spatial representation of a new national identity.

To Se-Mi Oh of the University of Wisconsin-Madison, “Seoul became a showcase city for Japanese nationalism,” a place that fictionalized the environment by either erasing traditional features or masking them in the “decorative qualities” of the modern. In the end, said Oh, a specialist in Korean literature and visual culture, the would-be utopia of colonial-era Seoul existed only in a “cultural void,” a modernity that was more “phantasmagoric” than practical.

After 1945, South Korea got busy making its own version of architectural modernity, and at one point set out on a campaign to erase the Japanese version, building by building.

Such changes after the war led to the core question of presenter Jini Kim Watson. “In what ways,” she asked, “has colonial space been ‘unbuilt’ in postcolonial South Korea?” Watson is a professor of English and comparative literature at New York University, but was once a practicing architect.

To answer the question, she called on architecture, urban history, and creative works that bear witness to the transformation of postcolonial South Korea. Watson employed the same hybrid tactic in her 2011 book, “The New Asian City: Three-Dimensional Fictions of Space and Urban Form.” It tells the story of three of the four acknowledged economic Asian Tigers: South Korea, Taiwan, and Singapore. (The fourth is Hong Kong.)

These three former colonies underwent rapid postwar transformations and now provide a model of spatial and economic expansion for a rising China and India. But urban renewal, with its overlay of high-rises and expressways, came at a cost to traditional environments, Watson said, a sign that the Asian Tigers narrative has more than one dimension.

Its fast-lane modernity may be economically powerful, but it can be heartless too, like the Yi Kwangsu novel that was studied so closely by Choi. It’s the painful story of a love triangle, with a man torn between two women who represent modernity and tradition. It’s a familiar trope, “leaving the past behind, in the figure of a woman,” said participant Arindam Dutta, who teaches architectural history at the Massachusetts Institute of Technology. Other participants were Lippit; Carter J. Eckert, Harvard’s Yoon Se Young Professor of Korean History; and Alice Tseng, who teaches Japanese art and architecture at Boston University.

The four lectures represent one overarching problem, added Dutta, one that comes up in a colonial setting or in the aesthetic colonization that modernity itself sometimes represents, namely “the struggle for an authentic sense of self.”