A boost for city students 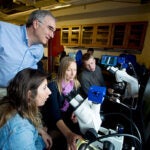 When Jefferson Correia arrived at Syracuse University as a freshman, he sat in a large lecture hall with the school’s dean, along with hundreds of others in the incoming class. When they were asked what they hoped to pursue, several of his peers said finance “because their father was in investment banking,” or because they hoped one day to take over the family business, Correia recalled.

“I am sitting there thinking, ‘My dad is a cook … what am I doing here?’ But then, at the same time, because I’d gone through the Crimson Summer Academy [CSA] … I knew I could succeed, because I already did it at CSA. So if I did it once, I could do it again.”

Correia, who graduated from Syracuse in 2011, took part in an Askwith Forum at the Harvard Graduate School of Education on Tuesday along with five other alumni from CSA, an intense academic and college preparatory program founded by Harvard in 2003 to support high-achieving high school students from Boston and Cambridge.

The initiative, whose curriculum is based on the theme of students as citizens, brings 30 of them to campus over three consecutive summers for classes, field trips, cultural activities, and discussions with Harvard professors. The program, which is funded by the President’s Office at Harvard University, includes a yearlong mentoring component with Harvard College students and CSA alumni. Students who successfully complete the program are awarded a $3,000 scholarship to use at the college or university of their choice.

“The culture that has been created at the academy, it’s palpable,” said CSA Director Maxine Rodburg. “This incredibly positive community that supports each other, that lifts each other up, that reaches out — it’s really quite remarkable.”

Each graduate had a story about that supportive community. One participant said his CSA experience helped him express himself more freely. Another turned to a CSA friend and mentor for support during a rough freshman year. Others said they were inspired by their challenging summer classes and returned to high school energized and a step ahead in math and writing. And all made long-lasting friendships, and went on to top colleges and universities.

Bates College President Clayton Spencer, Harvard’s former vice president for policy who helped to design the College’s current financial aid program during her Harvard tenure, was a driving force behind CSA. During the discussion, Spencer explained how the initiative began as a national pipeline program envisioned by onetime Harvard President Lawrence H. Summers, but quickly morphed into a multiyear initiative with a residential component at the urging of Rodburg, who was director of the Faculty of Arts and Sciences’ Writing Center.

“[Maxine said] ‘If you want to do something that really changes lives, this needs to be a local program. It needs to draw from Boston and Cambridge’s most challenging public schools, and [the students] need to come every summer after ninth grade.’

“I knew we had a really powerful program from the beginning.”

The numbers attest to its success. Ninety percent of CSA graduates have completed college or are on track to do so in four or five years. Another powerful proof of the initiative’s long-term impact comes from those who attended the academy, a closely connected group known as “Crimson scholars.”

Gabrielle Farrell said her drive to excel in college and try new things has much do with the confidence she gained at CSA. At one point, Farrell waved to Harvard President Drew Faust, a fellow Bryn Mawr alumna who was seated in the front row of the lecture hall.

“Without the CSA, I would never have grasped onto the concept that writing is transformative, and it’s constantly changing. … I remember constantly running back to Maxine for guidance with that, and it all has to do with confidence, and CSA instills that confidence in us.”

Andria Bhagwandeen, now a junior at Bates, had a transformative moment during her early days with the CSA program. She remembered her high school English teacher calling her “one of the best writers” she had seen. But when Bhagwandeen arrived at CSA, she failed her first essay assignment three times.

“It was at that moment I realized how important CSA became to me in … shaping my academics. Quite honestly, I don’t know where I would have ended up if I didn’t come to CSA. It really paved a whole new way for me to go, and that’s what I’m really thankful for.”

For Wesleyan University student Kwame Adams, traveling to see colleges with other CSA participants and meeting with students on various campuses helped him feel more comfortable with the college application process, and with applying to top-tier schools.

“Being able to go to those places, eat in a dining hall and talk to a panel of students, and hear from professors … eased our fears and let us know, ‘You can do this. You can be here.’”

The Crimson Academy is one of Harvard’s efforts to support students from modest economic backgrounds. In addition to a comprehensive financial aid package to support undergraduates, the Faculty of Arts and Sciences (FAS) recently announced the rollout of a new initiative, the Harvard College Connection, which is designed to bolster existing efforts to encourage low-income students to apply to Harvard and other selective colleges and universities.

The new program will use social media, video, and other Web-based communications to connect with high school students.  Harvard admissions officers already travel to more than 140 cities and towns each year — many in low-income areas — to meet with potential students, parents, and guidance counselors.

There is a continuing need to reach those students, experts agree. Recent research conducted by the Harvard Kennedy School’s Christopher Avery and his Stanford collaborator Caroline M. Hoxby showed that high-achieving high school students from limited backgrounds aren’t generally applying to elite institutions, in part because they have little exposure to peers attending such schools, or they are unaware of the broad financial aid packages available.

Avery, the Roy E. Larsen Professor of Public Policy and Management, is working with Harvard on the College Connection initiative, and is also involved with gathering feedback from CSA alumni about the summer program.

Hear more about the mission and impact of the Crimson Summer Academy from CSA Director Maxine Rodburg, a CSA mentor, and a student participant.