Social justice at the A.R.T. 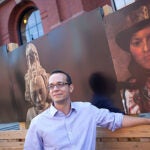 The modern opens the past

Once described by an affectionate collaborator as “the laser,” the American Repertory Theater’s (A.R.T.) hard-driving artistic director always has been about maximum focus with her choices and maximum engagement with her audience.

When she took the reins in 2009, Diane Paulus announced that her mission was to “expand the boundaries of theater.” She kept that goal firmly in sight when programming this year’s A.R.T. lineup.

“The primary thing that drives me when I program is looking for work that I believe will catalyze something greater than just the work on the stage,” said Paulus. “By that, I mean looking for artists who are interested in subject matters that will catalyze an event for the community, catalyze dialogue, catalyze debate — shows that will reach beyond the stage into an energy that will bring a community together around an issue, a topic, a point of view.”

Now, after almost five feverish years at the helm, a number of Tony Award nominations and wins — including best director for her recent circus-inspired revival of the musical “Pippin” — Paulus feels she has time to catch her breath and stage projects she has developed over time. The New York City native used an equestrian metaphor to describe how her many projects evolve.

“It’s like you have horses that you are grooming. Some are just out in the field, and they are just colts, some are doing their practice runs and jumps, some are being groomed and ready to run their race, and some are in the gate … we have a whole stable of these projects now.”

But that process has taken time.

“In my first couple of years here, it was, ‘What are we doing next month? What’s next fall? What’s next spring?’ Now we’ve been in a process of being able to do multi-year planning. We are finally moving into that phase.”

Paulus remains true to “expanding boundaries” with the A.R.T.’s season’s opener, “All the Way,” featuring the Emmy-winning actor Bryan Cranston, famous for his role as a disaffected chemistry teacher turned drug dealer in the hit TV series “Breaking Bad.” In the A.R.T. production, Cranston plays President Lyndon B. Johnson, struggling to find his footing as America’s new leader after the assassination of President John F. Kennedy. The play focuses on Johnson’s first year and his efforts to move civil rights reform forward.

Paulus has long wanted to work with the show’s director, Bill Rauch ’84, the artistic director of the Oregon Shakespeare Festival, which premiered the play last summer. When Rauch’s schedule opened up and he expressed interest in further developing the work, she jumped at the opportunity.

“You are just looking for the right moment and the right project,” said Paulus. By chance, that moment was nearly simultaneous with a contentious decision in the U.S. Supreme Court to eliminate a key part of the Voting Rights Act, which Johnson signed into law in 1965.

“[It] felt like a terrific production to open our season [with] because of the topicality and the political nature, and the kind of discussion that would be stirred around it,” Paulus said.

Accordingly, she and her team have organized a discussion with Harvard scholars and others around the themes in “All the Way.” The panel will be co-presented by Harvard’s W.E.B. Du Bois Institute and moderated by its director, Henry Louis Gates Jr., Alphonse Fletcher University Professor at Harvard University. It will take place this Monday at 4 p.m. at the Loeb Drama Center.

Another work that probes a challenging topic and will generate discussion is the musical “Witness Uganda.” Created by Matt Gould and Griffin Matthews and directed by Paulus, the show will explore U.S. aid relief work in Africa. Paulus said the play, workshopped this summer at the A.R.T., has already forged connections across campus. The production will have its world premiere in February.

For Paulus, planning a year of theatrical works is like putting together a “giant jigsaw puzzle.” The process requires balancing new plays with classic works, and more often than not juxtaposing text with music and dance.

It turns out that A.R.T. audiences love a good musical. And Paulus — who reinvented “Hair” for Broadway, and whose “Donkey Show,” a disco-driven version of “A Midsummer Night’s Dream,” has been running for years — couldn’t be happier.

“We’ve developed such an appetite in our audience base for this serious interpretation of classic musicals or new musicals,” Paulus said, adding that she thinks “Witness Uganda” will resonate with musical-loving crowds, the local Ugandan community, as well as young people who “want to make a difference.”

“I am excited for what the musical will mean to young college students, to this (Ugandan) community in Waltham that we’ve already connected with, and to people who work in the not-for-profit sector who deal with all of these issues when they are trying to make change in the world.”

To round out the season, Paulus and her collaborators will dive into the illusory with Teller, the famously laconic half of the magic duo Penn and Teller. Paulus and Teller are collaborating on Shakespeare’s darkly enchanting “The Tempest.” Teller is actually “quite verbose when you meet him in person,” Paulus said, a handy quality when instructing actors such as Patrick Page, the production’s Prospero, in all things magic. That show will open in May.

Paulus has always striven to present a thematically unified season. Sometimes the theme is quite specific, as in her second season, which explored Americana-inspired works. This season, she said, the theme emerged more organically.

This year’s unifying theme involves notions of justice. Another spring production examines the theme on a personal level with the world premiere of “The Shape She Makes,” a work created by choreographer Susan Misner and writer/director Jonathan Bernstein, about a girl in a dysfunctional family. “It looks at justice in a very intimate family unit … what we are thrown into as a child and how that manifests itself into adulthood,” said Paulus. Social justice underpins “All the Way” and is explored on a global level in “Witness Uganda.” In “The Tempest,” the audience samples the questionable justice of revenge.

Anyone familiar with the Robin Hood tale knows that the forest-dwelling outlaw had his own particular brand of justice. “The Heart of Robin Hood,” produced in cooperation with the Royal Shakespeare Company, will add a fun twist to the familiar tale, with Maid Marion as the heroine who converts Robin Hood to his popular practice of giving the wealth he has taken from the rich to the poor.

“It’s just a great story with incredible physical production values,” said Paulus. The production will include a steep, raked forest, a tree that extends out over the audience, and merry men sliding down a ramp and hanging off ropes.

“The Heart of Robin Hood” premieres in December, along with “The Light Princess,” directed by the A.R.T.’s artistic associate Allegra Libonati.

Paulus said of the new season, “There’s something for everyone.”