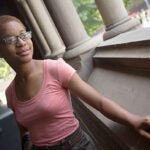 “In this annual ritual, I come to you to mark change,” Faust told her listeners, some in suit jackets, others in flip-flops, who jammed into the chapel’s elegantly carved wooden pews and spilled into the aisles for the 15-minute service. It is “a change we feel in the weather and light around us as we welcome the pellucid days of New England autumn, change we at once embrace and regret as we abandon the less-hurried pace of summer for renewed dedication to the work ahead in a new season of teaching and learning.”

The worship service is a tradition that began in 1636, at the time of Harvard’s founding, as a way for students, faculty, and others in the community to gather and quietly consider the day.

As is customary, music was provided by the Choral Fellows of the Harvard University Choir, led by Edward E. Jones, the Gund University Organist and Choirmaster. The festive processional was authored by Carson P. Cooman ’04, composer in residence at Memorial Church.

Faust acknowledged that while Harvard is a “devoted observer of tradition,” ultimately “universities are, paradoxically, about change.”

Reflecting on the Aug. 30 death of Seamus Heaney, the iconic Irish poet who had often taught and lived at Harvard over the past 34 years, Faust recalled his words in “Villanelle for an Anniversary,” a poem he composed in 1986 to commemorate Harvard’s 350th anniversary.

“Seamus urged us to honor our past by looking to our future,” Faust said. “‘Begin again,’ he wrote.”

Following a reading of Ecclesiastes 3 by the Rev. Jonathan L. Walton, Pusey Minister in the Memorial Church and Plummer Professor of Christian Morals, Faust noted that while “change is not easy,” it is a natural and vital part of the University experience.

“As we enter upon this new year at Harvard, let us welcome the rhythm of change,” she said, adding later, “And may the change of the season that is upon us and this year of new knowledge, new discoveries, new friendships, and renewed community be filled with wisdom and happiness. Let us begin again.”