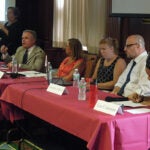 Noted Irish poet had long and deep ties to Harvard

When a famed poet dies, words come tumbling to mind.

For the many members of the Harvard community who knew Irish poet Seamus Heaney, the 1995 Nobel laureate in literature who died Friday, the news of his death mirrored his description of a fine poem: “It catches the heart off guard.”

Critics often called Heaney, who died in Ireland at 74, the finest Irish poet since William Butler Yeats. He began teaching at Harvard as a visiting professor in 1979, was elected the Boylston Professor of Rhetoric and Oratory (1984-95), and then eased into a final Harvard rhythm as the Ralph Waldo Emerson Poet-in-Residence, a post he held until 2006.

During all of his part-time residences at Harvard, he lived in Adams House. “The arts and bohemia were represented there,” he said in a trans-Atlantic interview with the Harvard Gazette last year. “It was a desired address.”

In 1998, Harvard gave Heaney an honorary degree. The citation, summing up the poet’s life, read: “Amid history’s blood-dimmed tide, risen from the dank sod of memory and silence, his resonant verse reminds us that ‘the end of art is peace.’ ”

“We are fortunate and proud to have counted Seamus Heaney as a revered member of the Harvard family,” said Harvard President Drew Faust.  “For us, as for people around the world, he epitomized the poet as a wellspring of humane insight and artful imagination, subtle wisdom and shining grace.”

Poet Jorie Graham, the current Boylston Professor of Rhetoric and Oratory, said in an email: “When death takes one of their great poets, an event which happens only a few times in a century to any given people, in any given language, there is always a terrifying silence that follows. Who will sing our soil, our inner secrets, our history, our transactions between those two, our loves? One lives to feel the passing of such a voice rarely, maybe once in a lifetime, and today is one of those days for so many humans on this earth.”

Heaney’s longtime friend, collaborator, and colleague Helen Vendler, Harvard’s A. Kingsley Porter University Professor, introduced the Northern Ireland native at a 2008 reading as “a poet of the century, and the new century, but also a poet of Harvard.”

Heaney’s last official appearance at Harvard was in May 2012. At Morning Exercises, in honor of the University’s 375th year, he reprised his 1986 “Villanelle for an Anniversary,” composed for the University’s 350th.

In her tribute, Faust recalled that “inimitable villanelle” and said it will “forever remain one of the most eloquent evocations of what our University is and aspires to be, with our books open and our gates unbarred.”

The demanding 19-line poetic form relies on the rhetorical power of repetition, in this case, alternate rhyming refrains lifted from the first stanza. “There’s a kind of bell-ringing quality to the villanelle,” said Heaney told the Gazette last year, “which makes it easy on the ear.”

Soundbytes: Anatomy of a villanelle

In an interview last year, Seamus Heaney reflected on writing a villanelle to mark Harvard’s 350th anniversary in 1986. “There’s a performance element to it,” he said of the songlike poetic form of 19 lines used brilliantly by Dylan Thomas, Elizabeth Bishop, and just a few others. Read it too smooth and it sounds “pat,” said Heaney, who reprised the poem at Harvard in 2012. Read it too rough and “it sounds galumphing along.”

Harvard English professor, essayist, and poetry critic Stephen Burt wrote in an email that the death is “an inestimable loss for his friends, for his students and former students, for Harvard, for Ireland, for the many readers all over the world that his work has attracted (and rewarded, and deserved), and for the history of poetry in the English language, in whose achievements, transformations and delights he played a great part.”

Burt praised Heaney’s deep-feeling style, saying, “He wrote with gravity, and with care, and with attention to his own place of origins; he also wrote with verve, with pleasure, with elaboration, on his own frequency, which became one of ours.”

David N. Hempton, dean of the Harvard Divinity School and a fellow native of Northern Ireland, crossed paths with Heaney in 1970 at Queen’s University in Belfast, where the poet was a young lecturer in the English Department and Hempton was a freshman.

“It was an obviously tremendous shock,” he said of Heaney’s death, “though I knew he had been unwell.” In January, the Divinity School had invited Heaney to deliver this fall’s Ingersoll Lecture on Immortality, a tradition since 1896. “He sent me one of the world’s great ‘No’ letters,” said Hempton. “It was almost a joy to read the letter, despite the rejection.”

During the 1970s and 1980s, Hempton said, people in Ireland “north and south were reading his poems,” a unifying Irish literary experience despite the era’s sectarian strife. “It was quite evident to all of us that he was … a poet of extraordinary distinction.” Heaney had a magical grasp of the language, a “realism united to hope,” said Hempton, that was free of pretension and inspired by Ireland’s landscape and language. “He was always the son of his rural parents.”

The poet, born in a County Derry farmhouse, also thrived as a translator and playwright. As a translator, his 2000 rendering of “Beowulf” combined the music of Anglo-Saxon influences and modern English. It won the Whitbread Book of the Year award.

“Heaney was necessary to people speaking his language — a language which he, more than anyone, traced back to its living roots in Gaelic, Anglo-Saxon, Latin, Greek, though never losing its local inflection,” said Graham. “That he was also necessary to people speaking so many other languages, on this beautiful and war-torn and lonely planet, is a testament to the universality of his soul’s singing.”

From 1973 to 1999, Robert Kiely was master at Adams House, Heaney’s Harvard home. (Kiely is now Donald P. and Katherine B. Loker Professor of English Emeritus.) “I can never forget his coming to live in a very modest guest suite in Adams House when he was a quite young, esteemed, but not yet world famous, poet,” Kiely recalled in an email. “Guests of the Harvard Houses often take a room, but never show up for anything.  That was not Seamus.  He had meals in the dining room with students, gave formal and informal readings, taught classes, and, best of all, brought Irish friends, musicians, to our annual St Patrick’s Day teas and recited poetry while standing on a chair while I (before the rules tightened) bartended black-and-tans in the master’s study of Apthorp House.”

Heaney also set a new standard, remembered Kiely. “As a student, I thought poets had to be odd and neurotic, which was true enough of many of the American poets of my generation,” he said. “But Seamus — God bless him — was a sane as well as a greatly gifted, kindly, good-humored, and modest man.”

Every semester-long visit began the same way, Heaney recalled last year: “Go straight to Adams House, set up, and then go straight to the bookshops.” After that, he always stopped at One Potato, Two Potato, a long-gone restaurant on Massachusetts Avenue.

Heaney fondly recalled the material Harvard, and its resonances, including the Yard, which lent him a sense of his own boyhood on a farm. There was also “the excitement of driving along Storrow Drive and seeing the outlines of the Houses, which was a kind of moment I would remember always.”

Some evenings, Heaney said, he would slip away to smoke a cigar outside Apthorp House. He enjoyed other quiet corners at Harvard too, including the library at Adams House and the Woodberry Poetry Room at Lamont Library. “It was quite easy to sit down,” said Heaney, “and doze off, even.”

He remembered writing just two poems during all his years at Harvard, intervals that were more full of teaching, reading, and poetry readings than the business of writing poems. “I tended to regard the Harvard stint as a kind of executive moment in life,” said Heaney. “Your public self was on.”

He felt a tenderness for Harvard, remembered Kiely. “On the day he heard he was awarded the Nobel Prize, he phoned us (before cellphones) because he said he was too happy to keep the news to himself,” Kiely recalled. “I took the call during one of our teas and announced it to storms of Adamsian applause.  I think we all really loved him.”

Heaney’s two compositions while at Harvard were the anniversary villanelle and “Alphabets,” which was written for the Phi Beta Kappa Literary Exercises in 1984. “Traditionally the Phi Beta Kappa poem is about learning,” Heaney said. “So mine was [about] making the first letters at primary school.”

“Alphabets” is a tribute to reverie, childhood, longing, and to the graduated nature of learning. Over time, letters on a slate become boyhood Latin and then a poet’s alphabet of a “new calligraphy that felt like home.” The poem continued: “The letters of this alphabet were trees. / The capitals were orchards in full bloom, / The lines of script like briars coiled in ditches.”

During his second-last reading at Harvard, in 2008, Heaney reflected on the anniversary poem, which he had read to a crowd of 20,000 in 1986. The repeating lines made the villanelle handy for reading over loudspeakers, he said, since, “If you’re going to read a poem in the open air, over large speakers, to large crowds, make sure it’s very clear.”

Over the years, Heaney’s readings at Harvard and elsewhere were so wildly popular that his fans were called “Heaneyboppers.”

A world of them now mourns.

“Today many will pick up his books to hear him momentarily again,” said Graham. “He will give them back the depth of their being, awaken their sprits, quicken their hearts. He will awaken them to the complexity of existence, the mystery of mortality, and help them take the measure of the heartbreaking conflicts and confusions of history without ever losing the sense of the horizon at which history and poetry may rhyme. And then he will be read down the centuries as long as there are readers.

“As for the man, so many people will miss him desperately in what they will feel is an intimate way, as he was an astonishing friend,” she added. “Rare indeed is the man about whom it can be said that the greatness of his soul is matched by its goodness. It is a sad day indeed when his early words ‘between my finger and my thumb, the squat pen rests’ take on their late meaning. His words will not rest.”

Burt added, “He will be read and re-read. And he will be missed.”