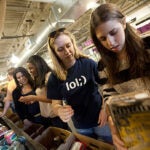 Harvard President Drew Faust today announced the appointment of Jonathan L. Walton as Pusey Minister in the Memorial Church and Plummer Professor of Christian Morals, effective July 1. A recently tenured professor of religion and society at Harvard Divinity School, Walton focuses in his research on the intersections of religion, politics, and media culture.

Walton is an ordained Baptist minister with Ph.D. and master of divinity degrees from Princeton Theological Seminary, and has preached actively while building his academic career.  Walton’s appointment concludes a yearlong search that commenced after the death of the Rev. Peter J. Gomes, who led the Memorial Church from 1970 until 2011.

“I am delighted that Jonathan Walton will bring his remarkable talents to Memorial Church,” said Faust. “He is among the country’s foremost scholars of African-American religion, a powerful preacher, a thoughtful pastoral presence, and a wonderful human being.  His scholarly and ecclesiastical callings are mutually enriching in the best traditions of campus ministry.  Professor Walton will bring new life to spirituality and religion at Harvard, as intellectual pursuit and lived experience.”

“Sitting in the pews of Memorial Church, I have felt the special power of this place,” said Walton. “To be considered for this position was an honor; to be selected is both exciting and humbling. I will do my utmost to continue the church’s tradition of intellectually challenging and spiritually nourishing preaching, its outreach to students of all faiths, and its impact well beyond Harvard Yard.”

Reflecting on the search, Faust noted the uniqueness of Memorial Church.  “It is increasingly rare to find university churches that have remained vibrant communities of religious practice.  From the outset, I wanted to maintain this distinctive Harvard institution, while also celebrating the enormously diverse religious and spiritual life of this campus,” she said.

In making the appointment, Faust sought the assistance of an 18-member search advisory committee, composed of faculty, students, staff, affiliated ministers, and members of the Memorial Church community.  The committee consulted widely with experts in campus ministry, preaching, homiletics, and religious studies, receiving many nominations over the course of the search.  Those considered in the search varied widely in terms of denomination, scholarly interests, ecclesiastical roles, and other dimensions.

The Plummer Professorship of Christian Morals was established in 1854 to acknowledge the centrality of moral and spiritual development of students at Harvard.  In 1997, the position of Pusey Minister of the Memorial Church was created as a permanent endowment, and Gomes held both positions simultaneously.   In assuming these roles, Walton will remain a tenured professor in the Divinity School.

Since arriving at Harvard in 2010, Walton has been actively engaged with the undergraduate life of Harvard College.  He lives as a resident scholar in Lowell House, along with wife, Cecily Cline, and twins, Elijah Mays and Zora Neale. “For so many of us, college is a time of spiritual discovery.  Especially at a place like Harvard, the fundamental questions — what our lives are for, what we owe others, how to live morally — are so important and so pressing.  It’s been a joy to help students wrestle with these issues,” said Walton.

“I think Professor Walton will be a wonderful leader of the Memorial Church,” said Annie Morgan ’14, a member of the search advisory committee.  “He has shown great love and care in getting to know the student population and has a very good sense of our interests and questions.  Having recently seen him preach, I have no doubt that he will pack the pews on Sundays.”

Walton’s scholarship explores the relationship among culture, media, ethics, and theology involving Christian evangelicals.  Walton’s book “Watch This! The Ethics and Aesthetics of Black Televangelists” (2009), examines critically the ministries of T.D. Jakes, Eddie Long, and Creflo Dollar, rooting their worship and theologies in comparative, historical, and social contexts.  His research has also appeared in a variety of scholarly journals, as well as such venues as Christian Century and Salon. Walton has been a guest commentator on NPR and CNN, and serves as resident ethicist on the Tavis Smiley Radio Show.

While pursuing his academic interests, Walton also served as the officiating pastor at Memorial West United Presbyterian Church in Newark, N.J., from 2001 to 2006, and has continued to preach and lecture regularly in churches across the country.  These churches have included Ebenezer Baptist Church in Atlanta, once led by the Rev. Martin Luther King Jr., as well as Harlem’s historic Abyssinian Baptist Church.

Walton is working on a book-length study of famed televangelist Carlton Pearson. “Pentecostalism Made Pretty” explores power, privilege, and race in the context of late 20th and early 21st century neo-Pentecostalism.  With Eddie Glaude of Princeton University, Walton is also writing a volume on African-American religious history, “American Religion in Black and Blue.”

Walton graduated from Morehouse College with a B.A. in political science, before attending Princeton Theological Seminary.  Walton was an assistant professor of religious studies at the University of California, Riverside, from 2006 to 2010 before joining Harvard Divinity School.