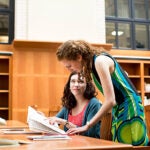 Zines were the scene

For award-winning director Bill Rauch ’84, returning to Harvard this summer was “emotional and wonderful.” Rauch, the co-founder and longtime artistic director of the Cornerstone Theater Company in Los Angeles and artistic director of the Oregon Shakespeare Festival (OSF), directs “All the Way” — a powerful examination of President Lyndon B. Johnson, civil rights leader Martin Luther King Jr., and the critical events leading up to the passage of the Voting Rights Act of 1964 — which opens the American Repertory Theater’s (A.R.T.) 2013-14 season. The show premiered at the OSF last year.

Rauch talked to the Gazette about his years at Harvard, the new production, and why the politics of a half-century ago still matter:

GAZETTE: You’re back on your old stomping grounds. Tell me about your time at Harvard. Did you direct while you were here, and what did you expect to do when you left?

RAUCH: I wanted to be a director, you bet. I directed 26 shows when I was an undergrad, so it was very much my calling at the time. I directed my first play in the Loeb X in the spring semester of my freshman year, Friedrich Dürrenmatt’s “The Visit,” and that was it. It was life changing, directing that play. We found a way to tell the story very theatrically, and it just felt — sometimes as an artist you feel like you really nail it and sometimes you don’t, and that was one where we really nailed it.

Joanne Green, now Breuer, was on staff here at the A.R.T., and she was the faculty adviser for students working at the X. She was my mentor. It was just a thrilling time, to discover that I loved directing, to be seeing productions here at the A.R.T. It was the A.R.T.’s first season when I arrived, in the fall of 1980, so it was a new era here on campus.

Rauch staged plays all over campus as an undergraduate, parading one from the Kennedy School to the steps of Widener Library to the Science Center.

RAUCH: Even in the theater in the basement of my dorm, Adams House. The corner of the basement that we used is still called the Kronauer Space, after the master who was there when we did it. I was just back there and I couldn’t believe that the corner still had the same name we’d given it 30 years before.

Dean Norris ’85, who co-stars in the TV series “Breaking Bad” with Bryan Cranston, was a friend of Rauch’s at Harvard, and played in that first basement production in Adams House.

RAUCH: It was something I’ve worked on four times in my life, including last year: “Medea/Macbeth/Cinderella” — Euripides, Shakespeare, and Rodgers and Hammerstein, all done at the same time on the same stage. I keep going back to it.

GAZETTE: The performing arts aren’t usually the first thing people think of when they hear “Harvard,” but there seems to be a thriving theater scene here.

I think you have a high number of creative, ambitious, self-motivated people [at Harvard], and you have the inspiration of a leading professional theater company with the A.R.T., and by not having a theater major, all the theatrical activity is extracurricular, so the people who do it really love the art form. There’s a lot happening. … Today there’s a more formal celebration of the arts at Harvard, but certainly when I was here in the ’80s it was a very vibrant scene.

After graduating, a few years out, I founded a theater company, Cornerstone Theater, and nine of the 11 founding members were Harvard grads. And I met my husband, Christopher Liam Moore [’86, who plays Walter Jenkins in “All the Way”], at Harvard; we started going out when we were students. … Harvard completely shaped my life: my husband, my first theater company, many of my closest friends.

GAZETTE: Is that the typical Harvard experience, or are you just lucky?

RAUCH: Some of both. I talk to people who have no connection to their alma mater, and I think my goodness, my life was so shaped by my Harvard experiences, and continues to be. I think I was lucky and it was this school; it was a combination of the two.

GAZETTE: For “All the Way,” you have a Pulitzer-winning playwright in Robert Schenkkan, and Bryan Cranston of “Breaking Bad,” who’s everywhere right now. This production seems gilded.

RAUCH: At the Oregon Shakespeare Festival, Alison Carey [’86] runs American Revolutions [a 10-year program commissioning new plays], which was inspired by Shakespeare’s history plays. We wanted to look at American plays that illustrate significant moments in the United States’ past. She reached out to Robert, and he was very clear from the beginning that he wanted to write about LBJ. He did, and I got to direct it at the OSF. It was insane. It opened right before the national conventions and it closed two days before the elections.

There were many theaters that were interested in producing the play next, and Robert and I settled on the A.R.T. for a lot of reasons, one of which was my connection here and one of which was my respect for Diane Paulus, who was a freshman at Harvard when I was a senior. Once it was clear it was coming to the A.R.T. and it fell in the middle of OSF season, we knew we’d need a new cast. We wanted a great actor to play LBJ, [and] we reached high with Cranston. We met with him at his home, and he knew the series would be ending and he wanted to do a play. … We’re just so unbelievably grateful that he said yes.

The entire cast is amazing. Starting with Bryan, but every single cast member is an unbelievably strong actor, transformational, deep. … Sixteen of the 17 cast members are different in this production, so they’re going to bring all of their insights, their impulses. Also we’re building on the platform, the foundation of that first production, so as a director I feel like I’m able to go a little deeper into the work because we’ve already solved the logistical things to tell the story. Now we can focus on nuances.

GAZETTE: “All the Way” fits a huge amount of history into the confines of a three-hour play.

RAUCH: Robert is a brilliant playwright. He took all the history and dramatized it and condensed it and conflated certain events, and made a very strong dramatic arc. But it was also very collaborative. Working on the production last year he continued to improve the script and I’m sure he will make, not a lot, but some changes for the production here at the A.R.T. …

Right now we’re completely focused on this being the best production for the Cambridge and Boston audiences. I believe in this play very strongly, and I want it to have a long life. I want to do everything I can with this production to make it lead to lots of other productions. What I care about is that this story continue, because I think it’s an urgent, timely story.

[With the Supreme Court’s recent decision to gut the Voting Rights Act of 1964,] we’re in a commemorative year to look at these events that changed our country. The events of “All the Way” depict how the modern political landscape was created in 1963–64, what that did in terms of the South shifting from Democratic to Republican power. In many ways the polarized political landscape we have today has all its seeds in those events, so it feels timely and even urgent to look at how the government functioned 50 years ago, and what happened that created the environment that we are now in.

RAUCH: He’s a hugely Shakespearean character, and Robert’s play is a Shakespearean canvas. Enormous ambition and appetites, huge contradictions in actions, hero and villain rolled into one. And then every other character, no matter how small the linage, is compelling and vivid. Language is really central to the event. Whether it’s Johnson’s inspiring rhetoric or salt-of-the-earth profanity, language is really central to the play.

You don’t see casts this size any more except in musicals. It’s an epic canvas. I think it’s important to contribute to the canon of new American plays, plays that are epic in scale. So many new plays are so tiny: two actors, three actors, four actors, and that’s it. Some stories are well told with four actors, but some need 17 actors playing 60-something parts, and this is one of them.

Rauch and Moore’s sons, Liam, 13, and Xavier, 8, came east with their fathers and stayed with their grandmother in Peabody, Mass., while Rauch and Moore worked on the play. Rauch said he would return to Oregon right after opening, while Moore would stay in Cambridge through the play’s close, but the boys would head home earlier.

RAUCH: They go back to start the school year without their dads, which is scary, and then after we open I’ll race right back to be with them while Chris finishes the run on Oct. 12. There’s poetic justice in that hard close. I’m a professional director, and I have to close so that the students here can have the same opportunity that I had when I was an undergrad to work in that space.