Seniors from a different generation 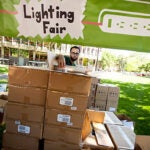 Cambridge, Harvard honor their elders with a picnic in the Yard

It was just two months ago that Tercentenary Theatre paid homage to Harvard’s graduating seniors. On Wednesday, it was a different group of seniors who stole the limelight.

For the 38th year, Harvard and the city of Cambridge hosted more than 1,000 of the city’s senior citizens for a day of food, fun, music, and community.  The annual Senior Picnic is just one of many ways Harvard welcomes its neighbors onto campus for activities, programs, and events.

“It is wonderful that Harvard hosts us every year,” said Cambridge Vice Mayor E. Denise Simmons.

Taking partial credit for the beautiful, breezy summer day, Cambridge Mayor Henrietta Davis welcomed the crowd sitting at tables under a green canopy of trees.  Many of the picnickers wore neon-green sunglasses and green-and-white baseball caps with the insignia “City of Cambridge. America’s most walkable city,” gifts from the mayor’s office.

After thanking the people who had organized and assisted with the event, Davis called the city’s elected officials to the steps of the Memorial Church. They each introduced themselves and lauded the contributions seniors make to the city.

State Rep. Marjorie Decker, who is also a Cambridge city councilor, was among them. “Thank you for making this such an incredible community to live in and for all the loving and nurturing you give to the children and others in this city,” she said.

After the speeches were over, the cool tunes of the Never Say Never band featuring Bobby Tynes and Tracy Rose overtook the sound of rustling leaves in the breeze.

The day was a walk along memory lane for Cambridge resident Howard Soones. “I always loved Harvard, always cut through the Yard on my way home from school,” he said.  “This brings back old memories of Cambridge, seeing people I went to school with … it makes me feel good.”