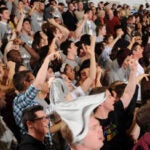 On the Science Center Plaza, delighted passersby spent time at a small petting zoo, taking time out to caress and pat the rabbits, ducklings, piglets, and kittens. Nearby, a friendly therapy dog had folks reaching out to say hello.

The animals were on campus last Thursday — and will be back again for the next few Thursdays at noon — as part of a community-building event by Common Spaces, an initiative of Harvard President Drew Faust that is designed to foster community on campus. The petting zoo will provide freshmen and other students, faculty members, and staff with some serious snuggle time.

Isabelle Jenkins, a graduate student at the Divinity School who has interned at the Harvard College Women’s Center, said the animals immediately changed her outlook.

“If I were a new student on campus, this would definitely make me feel less homesick,” she said. “I stepped into the pen and was surrounded by bunnies. It was heaven.”

For Madeline Meehan, Common Spaces’ director of events, that sense of calm, community, and perspective is exactly what the organization was hoping to create.

“We want to support the students as they’re transitioning into their new homes,” she said, adding that programming for the plaza will include student performances as well as the pet therapy. “People are always running at Harvard — through the Yard, to class, to their next meeting. It’s our job to help people stop, relax, and enjoy the environment here at Harvard.”

Tanya Iatridis, senior director of University planning, said the idea for the petting zoo came from the students.

“In many of our Common Spaces focus groups, students told us that when they leave their homes and come to this highly stressful environment they can feel lonely, especially in the first month, and that a petting zoo at the plaza might help,” she said. “They came up with the idea, and (today’s) turnout, I think, says a lot.”

Iatridis added that while the University’s Schools have individual common spaces, there were few locations on campus that were created to be comfortable for everyone. Areas such as the plaza and the porch on the steps of Memorial Church have been transformed by bringing in seating, tables, and programming, creating opportunities for members of the community to share space together.

“Common spaces are very dynamic,” Iatridis said. “For people to be able to stop and relax in one of these locations — even just for a moment and even if they’re alone — allows them to connect as an important part of this great community. That’s the president’s initiative.”

Chad Lowman, whose dog Toby is registered with Therapy Dogs International, said that, for students, moving to new locations and starting at new schools were stressful on their own. Together, they can seem overwhelming.

“The unconditional love of a dog may be just the thing to make those transitions a little less scary,” said Lowman, who brought Toby to the campus. “We enjoyed meeting so many people at Harvard who stopped by to give and get some affection. Toby is excited to come back to help bring a little joy to even more people. The petting and hugs feel good to him, too.”

Holding a week-old kitten in a blanket, Whitney Gardner of Animal Craze, the traveling farm that brought the zoo animals to Harvard, said it was rewarding to see the positive effect the animals had on the community.

“We’re going to be here every Thursday for the next few weeks,” she said. “The people have been great, and the turnout is just wonderful. We’re looking forward to coming back.”