In the daily grind, inspiration 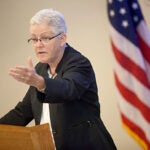 Often it seems that apathy reigns supreme among millennials, the 20-somethings who in poll after poll show their distrust of elected leaders, political institutions, and the courts.

But the Director’s Internship Program at Harvard’s Institute of Politics (IOP) is proving that not all millennials doubt that government and politics can be used for good. This year, competition was stiff — about 700 students applied for 105 three-month placements.

“Our mission is to get students engaged in politics and to get as many as possible to go into politics or political careers,” said Trey Grayson ’94, the IOP’s director. “We’ve discovered internships are gateways into careers in politics.”

Among the examples: Sietse Goffard ’15 and Eliza Pan ’15, who recently completed the program.

Goffard said he “helped work on the front lines,” answering “calls and emails” from constituents needing assistance navigating dense government bureaucracies. He learned a lot about federal law as he sought to help people across the 4th District with problems critical to their everyday lives.

“Their concerns were sobering,” said Goffard. “Quite often, the congressman is the first one they turn to when they’re having a government-related problem.”

Goffard, who hopes someday to work for the United Nations or the World Bank, said there is a popular misconception that government employees don’t work hard, which feeds skepticism among young people. More involvement might be an eye-opener, he said.

“The answer is more engagement. To counter indifference or skepticism, it helps to witness what goes on inside behind scenes. When you realize how dedicated and hard-working elected officials and their staffers are every day, you come to view their work in a very admirable light.”

Pan, 20, was dispatched to London and paired with Rachel Reeves of the Labor Party. As part of the so-called Shadow Cabinet, Reeves follows the moves of counterparts in the Conservative Party.

Pan handled constituent duties such as answering correspondence and emails and researching issues of the day. She also helped the shadow minister with what’s called the government’s regular spending round, when agencies search for fat to trim and MPs fight to protect their constituents’ interests.

Pan, who wants to remain in politics, sees more engagement through internships as a way to decrease distrust among her peers.

“I saw potential for mobilization of our generation,” Pan said. “People can be disengaged, but this is a way to be brought back.”

The Harvard students’ optimism counters grim statistics from many polls, including one conducted in April by the IOP. That poll reported that Americans aged 18–29 deeply distrust U.S. institutions. Among the findings:

“This is a generation that doesn’t have a lot of faith in institutions of government and service,” Grayson said. “A lot comes from own observations during their own lifetime.”

Millennials’ experiences have been marked by political dysfunction and economic anxiety, he said.

“Washington doesn’t work well. There’s a lot of bipartisan bickering and breakdown, not a lot of successful legislation crossing party lines, and an economy where even the recovery was one of the worst in post-war America.”

Yet, there remains an instinct to help.

“This is a generation that believes in community service but believes political institutions are not working well,” Grayson said. “So when you ask them if they believe that electoral politics is the right way to go, they’ll say, ‘serve your country, community.’ Their attitudes toward electoral politics are not as strong. There’s a disconnect.”

Like his interns, Grayson thinks programs such as the IOP’s show a young person the good that government can do, and may lead to a career in politics. As a Harvard student in the 1990s, he interned in the Kentucky Secretary of State’s office.

“We know the value of internships,” he said. “If the kid gets in there and sees people who try and do the right things, that’s going to rub off. When they come back to college, even if their roommate isn’t interested in politics, they’ll tell their roommate about their summer experience. If we do this, we think we can make a little bit of dent in their cynicism.”