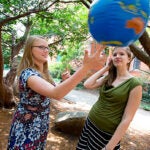 At Harvard, efforts grow to bring creative concepts to market

“We’re not businesspeople, but we are entrepreneurs.”

In a simple sentence, Harvard Professor Gary King both described the gulf that separates university faculty members from the business world and provided the reason why some accept the challenge of crossing it: an entrepreneurial spirit that already guides their research and teaching.

King, the Albert J. Weatherhead III University Professor, is a bit of an anomaly: a social scientist who’s also proven to be an entrepreneur. King leveraged research analyzing social media trends into a 2007 startup company, Crimson Hexagon, which was recently named by Fast Company as one of the 10 most innovative companies on the Web. He also collaborated with Eric Mazur, Balkanski Professor of Physics and Applied Physics, to ally his data analytic skills with Mazur’s teaching technology and methodology to form another startup, Learning Catalytics, in 2011, focused on improving classroom education.

King and Mazur are among a growing number of faculty members, fellows, and even students who are conducting some of their academic work with an eye outside the lab and the classroom, thinking about ways to have a broader impact by commercializing ideas and discoveries and bringing them to the marketplace.

A central pillar of efforts to advance discoveries

Harvard’s Office of Technology Development (OTD), established in 2006, is the central pillar of efforts to advance discoveries made across campus. The office’s core mission is to foster the spirit of innovation and entrepreneurship among faculty, harness the power of their intellectual property, and advance the development of their discoveries for the good of society, according to Isaac Kohlberg, Harvard’s senior associate provost and chief technology development officer.

OTD can help campus innovators start spinout companies, license their technology to existing firms, and further the development of their research through industry-sponsored funding. Starting a venture can lead to an unusual set of challenges and concerns for many budding entrepreneurs. By combining business expertise and scientific knowledge, OTD demystifies the process of creating a startup and helps to connect the dots among laboratories, investors, and industry leaders, Kohlberg said.

“The Harvard research enterprise is fueled by talented faculty and students who are eager to expand outside of the traditional academic outlets and connect on a broader level,” Kohlberg said. “OTD provides the support and expertise needed to help those with entrepreneurial ambition maximize their discoveries so they can have a large societal impact.”

Figures show that those efforts are working. Reports of invention are up, showing that investigators are increasingly mindful of the potential commercial applications of their discoveries. Those numbers have almost doubled since 2007, to 412 in 2013. The number of patents issued also rose significantly, to 74 from 43, as did the number of patent applications filed, to 231 from 147.

The value of Harvard innovation is also being recognized outside the University’s walls. Industry research more than tripled from 2007 to 2013, when 81 agreements brought in $42.3 million. Licensing agreements, which bring royalties to the University on income earned by its intellectual property, rose 41 percent over the same period. In 2013, OTD also launched nine companies that were formed around technology developed on campus.

Developments in recent months put faces on those statistical trends. Mazur and King’s Learning Catalytics proved promising enough to be acquired by education giant Pearson, while a startup based on the work of chemistry Professor Andrew Myers, Tetraphase Pharmaceuticals, went public in March with an initial stock offering.

“The OTD office, from the top down, is staffed with an extraordinary group of professionals,” Myers said. “They’ve been very much a partner and extremely helpful.”

In addition, stem cell scientist and diabetes researcher Douglas A. Melton reached agreements with two companies, Evotec, a German biotech firm, and Janssen Pharmaceuticals, a Johnson & Johnson subsidiary, to further develop a potential diabetes treatment discovered in his lab. And the foundation headed by Harvard Business School (HBS) alumnus Len Blavatnik is helping boost all this activity further, by donating $50 million to energize the translation of basic scientific discoveries into new treatments for patients.

“Harvard has reshaped its vision of how we can take our technology to the next level,” Kohlberg said. “With resources such as the Blavatnik gift, we can provide fuel for the research engine as well as help propel the results of that research to serve the public interest.”

Vicki Sato, professor of management practice at Harvard Business School and of the practice of molecular and cellular biology in the Faculty of Arts and Sciences, said that, while there is still work to be done, Harvard has come a long way in nurturing discoveries to market since she was a biochemistry doctoral student here in the 1970s.

Sato, whose expertise is in commercializing scientific discoveries, has a long resume in industry, working at biotech firm Biogen after graduating before moving to Vertex Pharmaceuticals, where she eventually became president.

Assistance in crossing the “valley of death”

Sato gave high marks to the work of OTD and especially of its Biomedical Accelerator Fund, which was the beneficiary of the Blavatnik gift and was recently renamed the Blavatnik Biomedical Accelerator at Harvard University. Curtis Keith, chief scientific officer of the Accelerator Fund, said the 5-year-old entity was created to help breakthroughs made at Harvard to cross the “valley of death” between discovery and development.

The valley exists because of the way that the United States finances research. While scientists with worthy ideas can get basic research funding from federal funding agencies, such as the National Science Foundation, the National Institutes of Health, the Department of Defense, the Department of Energy, and others, those grants stop short of financing the sometimes considerable additional work it takes to develop a promising discovery into a product.

On the other side of the valley are private companies, eager for new discoveries that they can turn into products but cautious about investing too early in a discovery that may not pan out. The resulting gap between discovery and development has been a place where good ideas and early stage discoveries go to die. It is also where the Accelerator Fund has come to the rescue.

“The typical reaction we get [from industry] is ‘very interesting, it has a lot of potential, but we feel things are too early for us to pick up,’” Keith said. “The purpose of the Accelerator is to provide the funding and expertise needed to develop technologies further so they are ready for partnership with industry or startup formation.”

The Accelerator Fund offers grants averaging $200,000 to develop a discovery to the point where private industry or venture capital can step in and provide the additional funding needed to bring the technology to the marketplace.

So far, the fund has financed 37 projects. Of the 30 completed, about half have been partnered with industry or spun out into new companies, a rate that’s quite high, Keith said. Of the rest, some haven’t fulfilled their early promise, while others are still seeking corporate partners.

Last spring, the Blavatnik gift gave the program a boost. The additional financing will allow the fund to take on more projects, and to extend funding for a handful of projects to develop technology to a more advanced stage.

The gift also is intended to strengthen links between Harvard’s business community and medical research and discovery. A portion of the Blavatnik gift provides money for three to five HBS postgraduate students or recent graduates to work one-on-one with Harvard scientists to draft business plans and commercialize discoveries.

The fellowship is a step toward the kind of cross-School collaboration that Sato said should occur more often, where the expertise of one School furthers the goals of another.

To that end, Harvard has shown that fostering innovation and entrepreneurship is a priority, and not just on HBS’s campus. The Wyss Institute for Biologically Inspired Engineering was founded at Harvard Medical School (HMS) with the goal of translating discoveries to the bedside as quickly as possible. The Harvard Innovation Lab, or i-lab, was built as an incubator to help students, faculty members, and members of the community fertilize the next great ideas.

The i-lab, which opened in Allston in 2011, was designed to foster the entrepreneurial spirit of students, hoping to provide a boost to the developers of the next Microsoft or Facebook, both of which have Crimson roots.

The facility sponsors a range of activities, including public lectures on topics related to innovation and entrepreneurship, workshops to build skills, and a course — taught by Sato — on commercializing science. The i-lab also helps link people looking for partners, and provides meeting and work space for groups developing an idea or product.

Beyond the i-lab, students can find encouragement in classes that foster an entrepreneurial spirit. In CS-50, for example, computer students spend the semester designing and developing a software project. Some students get so engaged in the process that they continue working on their creations after the semester ends.

Taught by Robert Kegan, the Meehan Professor of Adult Learning and Professional Development at the Harvard Graduate School of Education, the course helped Lundquist understand his fears about taking the plunge into the business world and discern which were grounded in reality and which were not. Using the technical expertise gained from the Extension School classes, Lundquist started his own digital marketing business, Nerds Do It Better, in Philadelphia last year.

“I had not started up a business ever before,” said Lundquist, who expects to graduate next spring.  “Using his [Kegan’s] techniques, I could get past it and see if my fears were unfounded.”

HMS student Marc Succi, who recently founded a medical device company, said the entrepreneurial spirit is also alive and well among the student body at the Medical School. Succi, working with fellow student Andrew Bishara, developed a digital glove that takes blood pressure, pulse, blood oxygen levels, and other health metrics, during an internship with Associate Professor of Medicine Jeffrey Karp and MIT Institute Professor Robert Langer. Succi said there is a lot of interest in innovation, especially for medical devices, among the student body in the Longwood area.

Succi, currently on a radiology rotation at Massachusetts General Hospital, said he and several other residents at HMS-affiliated hospitals are thinking about starting an innovation incubator for the Longwood community. Residents, he said, interact with patients all day and so have both medical knowledge and insight into patient needs.