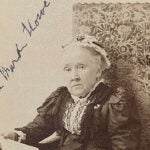 Claire Messud opened a Wednesday night reading from her latest novel, “The Woman Upstairs,” by quoting actress Kristin Scott Thomas, who said in a recent interview that she felt invisible and ignored as a woman who had reached a certain age.

Scott Thomas’ frustration — the realization of having crossed an imperceptible boundary in one’s life and having little recourse — is alive and well in Nora, the fiery protagonist in “The Woman Upstairs,” even at age 37.

A respected schoolteacher, Nora is stuck inside the life she never wanted after caring for an ailing parent for four years, and watching those crucial years sail by like balloons that slipped out of her hands. Nora wanted — wants — excitement, to be an artist, to live with vigor and passion in locales that are not, sorry to say, Cambridge.

“Midlife hits people at different times,” said Messud, a former Radcliffe Fellow who spoke at the Barker Center as part of Harvard’s Writers at Work series. “That moment you realize life is finite, it has a horizon.”

While she appears placid, Nora is fuming on the inside — and Messud’s prose is a first-person maelstrom of Nora’s “rants,” as she calls them — until the captivating Shahid family moves to town and reawakens something inside her. (Interestingly, the husband character, Skandar, is a visiting fellow at Harvard.)

“I wanted to write a book about the interior life,” Messud told the crowd. “If you know anything about the book, you know Nora is a little angry. People have said, ‘Did you have trouble accessing that emotion?’ And I said, ‘No, I did not.’ ”

Addressing that anger as well as aging and personal expectations, both through Nora and in her own life, Messud threw open the door on the sometimes secret but very present desires of women whose lives are put on hold for years because of family or money or because women are acculturated from an early age “to accommodate,” said Messud.

“Yes, things are inevitably better [for women], as anyone in this room can attest. But it feels like there are fundamental situations in our society and our culture that … are somewhat different for men and for women,” she said. “Nora’s experience is where she is at 37 and having taken care of her mom, now looking after her dad who’s on his own now, being a great friend, being a great teacher, and all the kids love her. … That’s a fairly female place to be.”

Nora claims she knows she could have been destined for greatness. She had been a keen, socially aware, and artistic youth. And now, well: “Don’t all women feel the same? The only difference is how much we know we feel it, how in touch we are with our fury. We’re all furies, except the ones who are too damned foolish, and my worry now is that we’re brainwashing them from the cradle, and in the end even the ones who are smart will be too damned foolish.”

Messud, whose husband James Wood is also a novelist, writer for The New Yorker, and professor of the practice of literary criticism at Harvard, borrowed from singer Marianne Faithfull and writer Anton Chekhov for help in rounding out Nora’s occasional hard edges.

“Marianne Faithfull has this song ‘The Ballad of Lucy Jordan’ that goes, ‘At the age of 37, she realized she’d never ride through Paris in a sports car with the warm wind in her hair,’” said Messud.

As for Chekhov, Messud referenced his classic short story “The Lady With the Dog,” in which the protagonist, Dmitri Gurov, says he has two lives: “one, open, seen and known by all who cared to know, full of relative truth and of relative falsehood, exactly like the lives of his friends and acquaintances; and another life running its course in secret.”

“I’m always aware of that,” she said. “Each of us will leave this room and have a very different impression of what went on here. So much of what’s important in our lives never breaks the surface.”