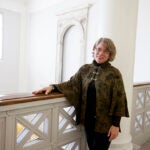 Harvard-themed sneaker draws collectors from around the country

Earlier this week, Corey Lewis boarded a MegaBus from Philadelphia to Boston.

With his folding chair and camping equipment, he was likely the oddest-looking passenger. But Lewis, 25, wasn’t headed into the great outdoors. Rather, he was coming to sleep in Harvard Square — all in the name of a pair of shoes.

He wasn’t the only one. This week, a line of mostly men snaked around Brattle and Church streets to ensure their chance at buying the limited-edition “Three Lies” Asics sneaker — a collaboration between Asics and the Harvard Square shoe store Concepts — that honors the legacy of the University and has fun with the three falsehoods surrounding Harvard Yard’s famed John Harvard Statue. (The statue is not a likeness of John Harvard himself but of a model, and Harvard did not actually found the University that bears his name. In addition, the statue lists the founding year as 1638, which is two years late.)

“My love for sneakers brought me here,” said Lewis, who learned about the shoe from social media. “I have friends with over 500 pairs of shoes. I have about 35 or 40 pairs myself. My closet’s pretty full.”

Opened in 1996, Concepts has a history of collaborations that regularly draw a fashionable crowd willing to brave the region’s infamously dicey weather to score a pair of cult sneakers. Only 800 pairs of the new sneaker were made and they went on sale at 10 a.m. today.

The most covetable feature of “Three Lies” is its gold toe — a perfect homage to the bronze statue that’s purported to bring good luck with a rub of its foot.

“This shoe is so serious,” said Kamal Malik, 20, of Cambridge.

Malik was the first person to arrive bright and early Monday morning and he served as the store’s gatekeeper of sorts, keeping a numbered list of campers. “This is the only store selling this shoe,” he said. “But the shoes are for Cambridge, and that’s why I’m out here.”

Malik said he has camped out at Concepts “dozens of times” for sneakers. His passion for shoes runs so deep that he and some of his family launched a business called Sneakergreet, a website that connects “sneakerheads” interested in meeting and buying or trading shoes.

Echoed friend Robin Brown, 23, “If you’re from Boston or Cambridge, you have to get these shoes.”

Not even the $150 price tag could deter freelance Web designer Derek Houston, 19. “You either live high fashion or you don’t,” he said. “These sweatpants cost $300.”

All week, the campers bonded but were sometimes tortured by the side effects of their sneaker quest. With unseasonably chilly temps rolling in, the men turned to the nearby 24-hour Market in the Square to “warm up, grab tea,” said Malik.

“It’s boring, but the anticipation is killing me,” admitted Malik, who rushed off Thursday evening to take a shower. Lewis held his place in line.

“My need for bodily hygiene is outweighed by the need for these shoes,” Lewis said.

Friends Kevin “Kev-Cash” Robles, Bidhan Roy, Alex Velazquez, and David Medrano drove up from New York City to purchase the sneakers. “We came for the seafood too,” said Medrano.

Their numbers in line were somewhere in the 30s, and the same went for their sleeping time: “I’ve slept like 35 minutes,” said Velazquez, 25.

But with luck, he would be one of the few walking around New York City in rare Boston shoes.