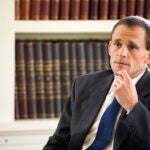 There was jubilation in the streets of Nairobi last Thursday after the British government announced a $30 million settlement for abuses by colonial authorities during Kenya’s Mau Mau rebellion in the 1950s.

The settlement stemmed in large part from the work of Harvard History Professor Caroline Elkins, whose book “Imperial Reckoning,” which won the Pulitzer Prize in 2006, detailed the system of camps set up to hold some 1.5 million Mau Mau detainees and the horrific treatment, including murder, rape, and castration, that occurred with the knowledge of colonial and British authorities.

The Gazette reached Elkins by phone in Nairobi to get her thoughts on the settlement, on what it means to the aged Mau Mau detainees, and the personal journey she has taken.

GAZETTE: Can you explain what happened with the ruling?

ELKINS: Thursday was an historic day. It was the day the British government finally decided to settle the Mau Mau case that was filed in the high court in 2009.

The settlement has four components to it, the first of which is that the British government apologized, or issued an expression of “sincere regret,” for the tortures that had been committed by British colonial officials during Mau Mau.

It then issued an approximately 19 million pounds sterling [about $30 million] payout to be divided between the approximately 5,200 claimants who are now part of the case. It also will be paying for a Mau Mau memorial in Nairobi, as well as the claimants’ litigation costs.

This is the first time the British government in its modern empire had issued an apology like this. The apology was simultaneously read by the foreign secretary [William] Hague into the parliamentary record [in London] and read here [in Nairobi] by the British High Commissioner Christian Turner.

GAZETTE: Some of our readers may not be familiar with Kenya’s Mau Mau rebellion. Can you give us some historical background?

ELKINS: Mau Mau was an anti-colonial movement that took place between 1952 and 1960, largely involving the Kikuyu population, Kenya’s largest ethnic group. The British response to this was extraordinary. A lot of people think of Mau Mau as a horrible, savage movement. But only 32 Europeans were killed, whereas there were approximately a million and a half Kikuyu detained in detention camps and subjected to unimaginable tortures, as well as forced labor and other despicable acts.

GAZETTE: What kind of torture occurred?

ELKINS: The kinds of atrocities we’re talking about are just absolutely horrific: castrations, rapes, sodomies with foreign objects and broken bottles, tying Mau Mau suspects to the back of Land Rovers and driving off until they were just disintegrated into bits.

It was a situation whereby not only were these horrors unthinkable and unspeakable, but they were happening with the full knowledge of the British colonial office in London, as well as the government here in Nairobi.

GAZETTE: What’s your role been in all of this?

ELKINS: The case itself is based upon my book, “Imperial Reckoning,” which was the topic of my doctoral dissertation. Many of the accounts were first recorded in my fieldwork. I conducted approximately 400 interviews in the late 1990s.

For the last four years, I have been an expert witness to the case, which entailed a considerable amount of work and also involved bringing several graduate and undergraduate students into the project. We had vast amounts of documentation — new files that had been released in this case that had to be reviewed, and then expert testimony rendered.

GAZETTE: Can you elaborate on the role of Harvard students?

ELKINS: As so often happens in litigation, the process of discovery revealed an incredible cache of documents that the British government had been sitting on. As an expert witness, I had to review about 20,000 to 30,000 pages of documents in a very brief period of time in order to write a witness statement for the court.

We had a team of five — myself, graduate students, and undergraduates — who were the self-proclaimed Team Mau Mau. We logged literally hundreds of hours of work. We scoured documents using a searchable database, met weekly and sometimes daily, and had lots of all-nighters and coffee.

It was teaching and learning at its very, very best, and it was integral to the success of the research I had to do in order to write some of my briefs to the court.

GAZETTE: How did you first get interested in the subject?

ELKINS: During my undergraduate years at Princeton, I was doing senior thesis research here in Nairobi. I was looking at social change among Kikuyu from the pre-colonial period until after independence.

I was here in the archives and found some documents related to the detention camps and looked for some secondary work on it. I found nothing, so I said if I ever went to graduate school this would be the subject of my doctoral dissertation. Sure enough, I came to Harvard in 1994, in the History Department, and two years later this was the topic of my doctoral dissertation.

GAZETTE: Are there any guidelines as to how the settlement is to be used?

ELKINS: There are no guidelines. There’s no Social Security here in Kenya, so much of this funding will help these elderly victims take care of themselves in their old age. Many of them need medical care and medications.

In many African societies, younger generations take care of older generations. Many of the claimants lost their children during Mau Mau, lost spouses, so we saw a breakdown in the social network of caring for the elderly. We discussed one case today [of a man] who needs medication and couldn’t have children because he was castrated.

So it’s all bound together. The social fabric that would often help take care of these individuals broke down because of Mau Mau, and the torture that took place.

GAZETTE: What was the reaction in Nairobi when the settlement was announced?

ELKINS: It was extraordinary. There was a news conference that lasted nearly two hours. Several hundred claimants were there. There were tears of joy, tears of sorrow. There was singing, dancing. It was really a deeply emotional experience on many levels.

This has received enormous coverage here in Kenya, it’s pretty much what everyone’s talking about at the moment. I think there’s a sense that the British government is taking moral responsibility for what it’s done.

GAZETTE: Is it the end of the legal story in Kenya?

ELKINS: For the most part. [The law firm] Leigh Day and the Kenya [National] Commission on Human Rights have managed to vet a large majority of those who potentially have claims, but I would not go so far as to say that the door is fully closed on others with legitimate claims coming forward.

GAZETTE: Is this the last word on this case?

ELKINS: I think it’s the last word as far as the British government offering an apology and looking to make amends [in Kenya]. It was very clear during the news conference that the British are hoping this can be the first step in a process of reconciliation, and it’s a step many people thought they would never see. But I think you’re going to see this process, and these kinds of claims, being made in other parts of the [former] empire.

GAZETTE: This has been a long journey for you as well. What are you personally feeling?

ELKINS: Just a range of emotions. There’s some validation because my work was highly criticized, with some calling it a work of fiction. I took on both the book and [the role of] expert witness in the case at great professional peril. I did that because I felt strongly that this is something that needed to be done.

There is nothing more satisfying than to see the impact this work has had on the individuals that I have worked with, taken oral history from, and who trusted me with their stories.

It’s also immensely humbling. I was at the news conference on Thursday, and elderly Kikuyu were hugging me, thanking me. It was quite a moment.