A beacon of community 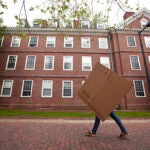 Standing next to Boston Mayor Thomas M. Menino and U.S. Rep. Michael Capuano at the ribbon-cutting ceremony for the new Charlesview Apartments at Brighton Mills in Allston Friday, Angela Holm drew on her childhood memories of the community.

“I grew up in Charlesview, and it was my entire world,” said Holm, now a neighborhood coordinator in the mayor’s office. “I went to church every Sunday at Hill Memorial Baptist Church, took swimming lessons at the West End House, went to summer camp at Harvard Stadium and Girl Scout meetings at St. Anthony’s, and watched my friends play little league at Smith Park.”

Holm said that sense of belonging and community in the old Charlesview Apartments was “the essence” of what brought elected officials, Harvard leadership, community leaders, and Charlesview representatives and residents together for the ceremony.

“The new Charlesview Residences will serve as an anchor for this community, with the diversity of residents and strong ties,” she said. “I’m overjoyed to be here to celebrate this new beacon for Allston and Brighton.”

The project’s first phase brings 240 affordable-housing apartments, a community center, 14,000 square feet of retail space, a half-acre park, and an expansive underground parking garage to the Allston-Brighton community.   The community center will open by late July, offering workforce development and other programs for Charlesview residents and neighbors. Phase two will include 20 affordable home-ownership units.

“Because the community came together, everyone has reached their goal of new housing, and it was desperately needed,” Menino said. “Harvard was a very important part of this, and we need to keep working together — that’s why we’re so successful.”

Recognizing the leaders of the Charlesview Inc. board for their “courage, hard work, and determination” in the project, the Rev. Frank Glynn, the board chairman and pastor of St. Anthony’s Church, called them to the stage to be acknowledged. “The people standing here with me are outstanding to their commitment to the vision of Charlesview,” he said. “It is because of them that the dream of Charlesview has reached the heights of today.”

Christine Heenan, vice president for Harvard Public Affairs & Communications, also emphasized the power of leadership and partnership. “This project was made possible in part by perseverance, but also by faith in what is possible when you stick with it and work together,” she said. “This project was also strengthened by the critical input of residents and the mayor’s office, who challenged us to do more, and do it even better.”

Discussion of the new complex began nearly a decade ago, when representatives of Charlesview Inc. approached Harvard about a possible land exchange to replace the aging 1970s-era, 213-unit, low- and moderate-incoming housing development in Barry’s Corner.

Working closely with residents, addressing concerns, incorporating their ideas into the project, and piecing together necessary funding involved multiple partners, including the mayor’s office, Charlesview Inc., the Community Builders Inc. (TCB), the Department of Housing and Urban Development, MassHousing, the Massachusetts AFL-CIO, and Harvard.

The completion of the project, Capuano said, was “not just good for the handful of people who will live here,” but good “for all of Brighton, all of Allston, all of Boston, all of Massachusetts, and all of the country.”

Thomas Gleason, executive director of MassHousing, noted that this was the largest project in the nonprofit organization’s nearly 50-year history.

“It’s not just about the 240 apartments here, or the land swap with Harvard … it’s the transformation of this entire area. And not many teams could have pulled that off,” he said, adding that the project had come in under budget and before the two-year deadline established for the project. “This is what happens when people think outside of the box.”

Bart Mitchell, president and CEO of TCB, which is the country’s largest nonprofit developer and owner of urban, mixed-income housing, emphasized that the spirit of places like Charlesview were part of what set Boston apart.

“We work throughout the Northeast, the Midwest, and the mid-Atlantic, so I get to spend a lot of time in American cities, and here’s what all of them have in common: They wish they had the strength of Boston’s neighborhoods,” Mitchell said.