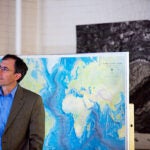 The trouble with Kepler

They didn’t always speak the same language, but climate scientists and disaster relief workers wrapped up a meeting Tuesday in agreement about the importance of leveraging climate insights into improved disaster preparedness as the planet warms.

The two-day conference was a rare convergence of two communities that, if the direst predictions come true, may get to know each other much better in the coming decades.

“We’re going to rely on you to deal with the mess that’s coming,” Daniel Schrag, director of the Harvard University Center for the Environment (HUCE), Sturgis Hooper Professor of Geology, and professor of environmental science and engineering, told the humanitarian relief workers at the event. “You’re going to be critical and you’re going to have your hands full.”

Topics at the event, “2013 Humanitarian Action Summit: Climate and Crisis,” included an overview of climate change as well as talks on climate change and food security, conflict and migration, humanitarian aid, climate predictions, and related initiatives in humanitarian organizations. It was co-sponsored by the Harvard Humanitarian Initiative (HHI) and the Harvard University Center for the Environment, and held at the American Academy of Arts and Sciences in Cambridge.

Attendees included representatives from a variety of academic and nonprofit organizations, including Oxford University, the University of Liberal Arts in Bangladesh, Oxfam, the World Food Program, AmeriCares, MIT, Stanford, the Brookings Institution, the World Bank, and the Conrad Hilton Foundation.

A major hurdle remains the translation of long-term climate trends into predictions about regional weather events. Although there seemed to be little doubt of the growing relationship between human-induced climate change and extreme weather, pinpointing trends precisely enough to be useful to relief organizations will be difficult, speakers said.

If long-term trends are clear, the natural variability in the weather on any given day makes it difficult to predict very far into the future. That’s not to say predictions can’t help.

Speakers pointed out that weather forecasting has improved significantly in recent decades, so that a 10-day forecast — nonexistent not so many years ago — is reasonably accurate today. Accuracy degrades rapidly beyond that, however, and predictability from a few months up to a decade away is very poor, after which longer-term trends can be discerned. Improved computing power should continue to improve forecasts, but there will remain a certain amount of unpredictability, said Mark Cane, a professor of Earth and climate sciences at Columbia University.

Climate scientists do understand some specific drivers of regional weather, and there are useful steps that can be taken even based on long-term outlooks. For example, the relationship between weather patterns and the El Nino and La Nina events in the equatorial Pacific are better understood. Though predicting the magnitude of an El Nino/La Nina remains difficult, scientists know that an El Nino is linked to heavy rains in western South America, drought in southern Africa, cool and wet weather in the southern U.S., and dry weather in Australia, which might shed light on the likelihood of crop failures, water shortages, and flooding. Also, knowing that record-setting heat waves will become more frequent will allow officials to take preparedness steps in cities with vulnerable elderly populations even if a heat wave cannot specifically be predicted far in advance.

El Nino and La Nina are such powerful drivers of local conditions in the regions they affect that a study of 93 tropical nations found that the annual risk of conflict decreases significantly from El Nino years to La Nina years, comparable to increasing annual per capita income in a nation from $1,000 to $10,000, Cane said.

The U.S. Agency for International Development has already begun to use data in its Famine Early Warning Systems Network, which uses weather and other information to give advance warning to places at risk of food shortages and famine.

“Any increase in predictability will be useful,” said Michael Delaney of Oxfam. “I don’t think we have to wait until it’s perfect to use it.”

HHI co-founders Jennifer Leaning, Bagnoud Professor of the Practice of Health and Human Rights, and Michael VanRooyen, HHI director, professor of medicine, and professor of global health and population, said that follow-up between climate scientists and disaster relief specialists will be key. VanRooyen said it’s likely a small working group will be organized to continue the conversation and develop real-world applications.