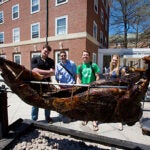 As portraits of former deans and presidents looked down from the walls of University Hall, Michael Shinagel, Ph.D. ’64, received confirmation that he had set a record as the longest-serving dean in Harvard’s history.

Shinagel was first appointed director of the Division of Continuing Education (DCE) in 1975 before being named dean of the Extension School in 1977, a position he has held until his retirement this year. (Shinagel’s official title is dean of continuing education and University Extension.)

“The accomplishment is yours, but the benefit has certainly been ours,” said Faculty of Arts and Sciences Dean Michael D. Smith, adding that Shinagel had “made a singular contribution to our institution” during his time at Harvard.

More than a hundred administrators, students, alumni, and staff gathered on May 14 to celebrate Shinagel’s legacy of work at Harvard University. In his almost 40 years of service, he shaped the frontier of continuing and distance education at Harvard.

Pronouncing him “one of the transformative leaders” of the University, former president of Harvard Derek Bok, who appointed Shinagel to his position as dean, said that it was Shinagel’s flair for entrepreneurship, combined with the good timing of the era of lifelong learning, that made his impact on continuing and distance education such a powerful one.

Shinagel observed that his career in continuing education at Harvard had begun 38 years ago on the same floor of University Hall where his retirement party was taking place. Recalling the meeting that finalized his appointment, Shinagel remembers asking Henry Rosovsky, then dean of the Faculty of Arts and Sciences, what his mission should be. Rosovsky responded: “Mike, don’t embarrass us.”

“With these words of encouragement,” Shinagel said wryly, eliciting cheers of laughter from the crowd, he began his career at Harvard.

“Thanks to a loving family, the best colleagues, faculty, and administrative staff that any dean could wish for, we have made a success of it,” he said. “That’s because we have followed our high-principled mission: to make sure that the books stand open, and the gates unbarred, to thousands of nontraditional students.”

When Shinagel began his tenure at DCE, the institution taught 75 courses to 4,000 students each year — numbers dwarfed by 2013 totals, when over 600 courses were offered to more than 13,000 students. Nearly 500,000 students have taken courses at Harvard through the Extension School and the Division of Continuing Education, with approximately 16,000 students completing their degrees and certificates.

Shinagel was also instrumental in making a Harvard education accessible and affordable to its employees. He proposed the idea of the tuition assistance plan (TAP) for Harvard staff members, an idea implemented in 1976, and a benefit that many take advantage of today.

In 1997, Shinagel also led the way in creating distance education at the Extension School, ultimately attracting students from 195 countries and offering more than 200 online classes. Many alumni of these courses, and of the Extension School, have expressed their gratitude to Shinagel online, on a tribute page created to celebrate his legacy and retirement.

In addition to his 38 years in continuing education, Shinagel’s career at Harvard has touched almost every aspect of University life. He was a House master for Quincy House from 1986 to 2001, was a nonresident tutor for Eliot House, and is a former president of the Faculty Club. “I didn’t even know we had presidents of the Faculty Club,” Smith quipped, prompting laughter from the crowd.

Acknowledging his colleague and friend, Rosovsky said that one of his favorite moments every year during Commencement occurs when Extension School students, “in ever-larger numbers, stand up and take their rightful place” among Harvard graduates.

“Thousands and thousands of students have done so over the years,” said Rosovsky, the Lewis P. and Linda L. Geyser University Professor, emeritus. “No future historian will ignore continuing education at Harvard, and that is due, in large part, to the efforts Dean Shinagel has made for the last 38 years.”