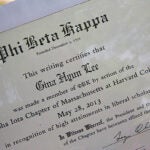 For the 223rd Phi Beta Kappa Literary Exercises the weather was sunny, with a chance of fame.

Onetime Supreme Court reporter Linda Greenhouse ’68, who gave the day’s oration, lent that idea some credence. Looking out over the Phi Beta Kappa (PBK) members assembled in Sanders Theatre, she said, “I’m speaking to at least one or two future Supreme Court justices — or at least I hope so.” Poet August Kleinzahler’s praise was oblique, but the idea was there. To the same audience he said, “You look like a clever lot.”

The PBK Exercises, a tradition at Harvard since the 18th century, are an intellectual stereopticon, a dual taste of the literary. There is an address by a poet and another by an orator.

Greenhouse, a PBK graduate of Radcliffe College, covered the Supreme Court for 30 years for The New York Times. The onetime Crimson writer won a 1998 Pulitzer Prize, was feted by seven of the nine justices at her 2008 retirement, and is now the Knight Distinguished Journalist-in-Residence at a certain law school in New Haven.

If the two shared one message, it was: Look at the world the way it is. Greenhouse declared she would defy the historic topic of PBK addresses at Harvard — policy — and talk about personalities instead. Among them: Justice Sonia Sotomayor, who was elected to PBK at Princeton but had no idea what it was; and Justice Harry Blackmun, a 1929 PBK graduate and the subject of a Greenhouse biography. He arrived at Harvard College in 1925, and for four years was too poor to go home on holidays.

Kleinzahler’s featured personality was his own: the reader of three poems shot through with merciless precision about the real world. First was the title poem from “Sleeping It Off in Rapid City,” which occasioned, by the way, what was surely the inaugural imitation of a velociraptor in Sanders Theatre. He delivered the poem’s “Kwok, kwok, kwok” with a raptor’s energy. Then came bitter sensory touches, like this view of the highway outside South Dakota’s Rapid City:

Through the buzzing, sodium-lit night
Semis grind it out on the Interstate
Hauling toothpaste, wheels of Muenster, rapeseed oil
Blessed is the abundance, blessed the commerce

Greenhouse followed with an oration, “The Sentence and the Parenthesis,” which was blessed with an abundance of hope. Justice Thurgood Marshall died in 1993, removing the last of the court’s true liberals, she said — and the question became: “Would the court hold fast to its ideals?” Would those ideals become a “sentence” (primary) or a “parenthesis” (secondary)?

“It is certainly possible to see a reversion to type,” she said of today’s court, which she worries is poised to curtail the spirit of the Voting Rights Act and of affirmative action. But here is the hope, said Greenhouse: “We’re living through one of the greatest civil revolutions” — a time when gays can marry and openly serve in the military; when a black man is president; and when a woman is the president of Harvard. Such notions 20 years ago, she said, “would have seemed highly aspirational but deeply fanciful.”

Meanwhile, in this culturally volatile American age, said Greenhouse, “the country has never been more in need of the values of PBK.”

The winners of the Alpha Iota Prize for Excellence in Teaching were also announced during today’s exercises. For more on the winners.