Pages out of time 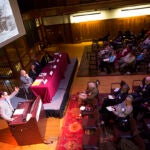 Exhibit uses objects to show how the precious commodity is measured, valued, understood

Students, here’s today’s assignment: Write a paper that weaves together a slab of trilobite fossils, a Polaroid camera, a Bedouin coffee urn, and an 18th-century pocket watch the size of a duck egg.

Actually, Sara J. Schechner has already done that. She and a few friends have assembled a multivenue exhibit called “Time & Time Again.” Through the lens of such craftily juxtaposed artifacts, the exhibit jars viewers into thinking about how time is measured and how conceptions of it change across cultures and epochs.

In the exhibit, which will run through Dec. 6, viewers start in the second-floor Science Center gallery at Harvard’s Collection of Historical Scientific Instruments. They can follow “time trails” by map or app to four other venues within Harvard Museums of Science and Culture. Despite its 30-plus stations in five buildings, the exhibit conveys just a few basic messages: that time is not just about clocks, that measuring time through the ages has been arbitrary, and that time measures the social as well as the practical.

Time “is not just about science and mechanisms,” said Schechner, the collection’s David P. Wheatland Curator. Conceptions of time vary across cultures, she said. Time has ties to the worlds of work, worship, music, memory, and to conceptions of life and death. Some time markers come from human artifice, and others from nature.

Trilobites are index fossils that help geologists to measure deep time. In this case, they serve as markers of the Middle Cambrian Period 510 million years ago. The Polaroid camera, Edwin Land’s personal “Swinger” model, illustrates how people have attempted to preserve time, especially since the invention of the photograph and the phonograph. The Bedouin coffee urn reminds viewers that despite the press of time, people have learned to break from it, too.

Then there is that 1724 pocket watch, 2 inches thick. It’s a reminder that along the way humankind moved gradually from measuring time by the sun and the moon to measuring it by mechanical means. (Weight-driven clocks appeared in the 13th century, domestic timepieces around 1400, and pocket watches for the rich in 1575.)

Time was the province of the circadian, the celestial, and the seasonal, since earlier agricultural ages looked to the heavens for temporal reliability. Then, beginning in the 13th century, time became a thing measured by weights and springs and gears — though whimsically decorated pocket sundials remained in vogue. Today, time is measured with astonishing precision by atomic clocks. (The exhibit includes a hydrogen maser clock, circa 1960. It’s the size of a water heater.)

The idea behind the exhibit was “to tell a more interesting and fuller story” of time, said Schechner. Hence the juxtapositions she had so much fun arranging in the last year. The trilobites, which measure geological time, are in a glass case near Sioux amulets, each containing a dried umbilical cord. Given to children to guard against evil, the amulets represent time as measured by rites of passage, like birth, puberty, marriage, and death. Not far from a line of pocket watches are examples of how nature tells time: tree rings, whorls on a turtle shell, or lines on a clam shell — the slow-growing housing for creatures that can live 500 years.

More will be added to the exhibit over the next eight months or so. A series of time-related lectures, panels, and concerts is planned.

“The bottom line is: I want people to think of time differently,” said Schechner. “I hope to challenge people in a positive way to re-examine the way they experience time in their lives.” What comes from nature, and what comes from culture? What do other cultures do that is different or the same? She pointed to a 4,000-year-old cuneiform tablet on which a Sumerian brewer listed monthly expenses for barley.

Nearby were timesheets filled out during work on an 18th century canal. “You keep your books — that hasn’t changed,” said Schechner, who counts among her specialties the myriad world of sundials. (Harvard has the largest collection in North America.)

“Time & Time Again” is a celebration of material culture. It echoes “Tangible Things,” a 2011 multi-venue exhibit at Harvard that revealed history through resonant objects — and that was paired with a related Gen Ed course. (Look for another, on time, this fall.) In both exhibits also, other Harvard museums were collaborators.

Why the theme of time this time? “We were trying to find a topic that would reach across to other museums,” said Jean-François Gauvin, Director of Administration for the Collection of Historical Scientific Instruments.

To get to time artifacts at the other Harvard museums, exhibit visitors use either the exhibit’s printed map or an app from Google or iTunes. (It was developed by Juan Andres Leon, a Ph.D. candidate in the Department of the History of Science and the collection’s digital projects manager.)

The exhibit provides material lessons in how plastic the idea of time has been. To North American Indians, time had no beginning or end. To early farmers, time was simply cyclical, marked by the seasons. With the rise of cities in the 14th century, time was increasingly seen as an unstoppable line, a finite entity that was not to be wasted.

The exhibit also shows how time is the creature of politics. In 45 B.C., Julius Caesar revised the solar calendar devised by Egyptians 3,000 years before. He moved the start of the year from January to March and named a month, July, after himself — giving it 31 days. Not to be left out, the Roman Emperor Augustus went on to do the same, naming one month August and stealing days from February to get his 31 days.

Some reforms stick fast, like July and August. During the French Revolution, days were ruled to be only 10 hours long, with each hour divided into 100 minutes.

No matter how you measure it, the exhibit reminds viewers, time comes to end. Some artifacts depict versions of religious apocalypse, and others lament the finitude of personal time. In “Death and the Standing Naked One,” a 1547 engraving, a young women is grappled by a skeletal figure of death. At her feet is an hourglass.

Nearby is a page from a Houghton Library emblem book. It reads, “Live ever mindful of thy dying, for time is always from thee flying.”