‘Gangnam Style’ by the Yard 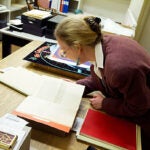 Every now and then a song sweeps the world, catapulting its singer into the stratosphere of super-fame. “Gangnam Style” is that kind of phenomenon, performed by South Korea’s Park Jae-sang, better known to nearly 1.6 billion YouTube viewers (the most ever) as Psy.

On Thursday the Korea Institute at Harvard University sponsored “A Conversation with Psy” for a packed audience of Harvard students, staff, and faculty and the international press at Memorial Church, in a session that was also live-streamed online.

The event was introduced by Carter J. Eckert, the Yoon Se Young Professor of Korean History. Slipping on a pair of sunglasses, à la Psy’s trademark style, Eckert suggested that Harvard hasn’t been so close to cool since Ralph Waldo Emerson’s 1838 speech on transcendentalism.

Alexander Zahlten, assistant professor of East Asian languages and civilizations, put “Gangnam Style” into the context of the investments Asian countries are making in exporting their cultures, and their growing influence in the West.

Psy then entered and shook hands, and the audience cheered as he walked to the pulpit.

Psy, of course, wasn’t always a superstar. He was born in 1977 in the well-to-do Gangnam district of Seoul. As the only son, he was expected to take over the family business, building a “semiconductor equipment thing.” To avoid that, he spent four years in the late ’90s in college in Boston. First, he studied business at Boston University, then dropped out and enrolled at the Berklee College of Music.

He left Berklee without a degree (“My nickname was W-W-F: Withdrawal, Withdrawal, Fail,” he said to a chorus of sympathetic “Awws!”), went back to South Korea, started making K-pop, and danced on television. He released his first album in 2001. For the next 10 years, Psy sang, danced, and made music.

“When I wrote [‘Gangnam Style’] last summer, the economy was so bad,” he said.

“Everyone was so poor. My only goal was to make them laugh, with the song and choreography, so I tried to be as ridiculous as possible.” He explained that he intentionally developed the now-famous “horsey dance” so that anyone could do it.

Then, lightning struck. By August, “Gangnam Style” was No. 1 on iTunes, and by November it was the most viewed video ever on YouTube. In December, it became the first YouTube video to reach one billion views.

“Isn’t that amazing?” Psy said. “I am so glad, because the crowd doesn’t know [the meaning of the words], but they look so happy” when listening to the song and doing the dance.

“I think there is something beyond the language,” he said, trying to explain the song’s popularity. “We can assume it’s the music. But that’s the boring answer. I think it’s the word ‘fun.’”

Psy has won accolades and dozens of music and video awards, but he said the moment he really knew he’d made it was when Madonna asked him to perform with her at Madison Square Garden. He said when he arrived, Madonna was lying on the stage, and she told him, “Honey, you can touch anywhere on my body on the stage.”

He said his first thought was, “I’m her honey?”

His actual response was, “Really?”

“I’ve got to be humble,” he continued. “This doesn’t happen to everyone, especially Asian artists. I dreamed someday, some Korean artist would be recognized in the American market, but I didn’t dream that it would be me. I have a very special body shape, so I never thought it would be me.

“It’s weird,” he continued. “I am facing you guys like this. But life is weird. I’m happy and so proud. It’s so unrealistic to make a speech at Harvard.”

During a question-and-answer session, he advised, “Please be positive. That’s the biggest power on the planet.”

And, almost echoing his cool predecessor Emerson’s words at the Divinity school so many years ago (“Thank God for these good men”), Psy said, “I thank God all the time, because what I want to do is what I can do.”

He then graciously thanked the audience for their time, and treated everyone to a Korean dinner.

“A Conversation with Psy” was co-sponsored by the Office for the Arts at Harvard “Learning from Performers” series and the Edwin O. Reischauer Institute of Japanese Studies.