Hammonds to step down as dean in July 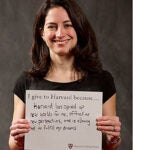 Giving back because of what Harvard gave them

Harvard College Dean Evelynn M. Hammonds announced today that she will step down as dean on July 1, choosing to return to teaching and research in the departments of the History of Science and African and African American Studies. Hammonds will focus on scholarship, research, and teaching, heading a groundbreaking new program for the Study of Race and Gender in Science and Medicine at the W.E.B. Du Bois Institute.

“Being dean of Harvard College has been an immensely rewarding experience for me, but I miss engaging deeply with my scholarship and teaching,” said Hammonds, the Barbara Gutmann Rosenkrantz Professor of History of Science and African and African American Studies.

“I am looking forward to redesigning my classes in light of new technologies and modes of teaching, and I’m eager to return to my teaching and research on race, genomics and gender in science and medicine.”

Hammonds will take a sabbatical after 11 years of continuous service before returning to her teaching program and her scholarship.

“Dean Evelynn Hammonds has led Harvard College through years of remarkable transformation,” said President Drew Faust. “She has played an essential role in ushering in both Gen Ed and Wintersession, in launching the renewal of the Houses, and in creating an array of new spaces and resources vital to life in Harvard College. She has fully invested herself in improving the experience of our undergraduates both inside and outside the classroom, and in promoting a culture of inclusion and community across the College. I’m grateful to her for all she has done to help our undergraduates thrive, and we will be fortunate to continue benefiting from her talents and wisdom when she returns to the faculty after a well-deserved sabbatical.”

Under Hammonds’ leadership, Harvard College made important strides on a number of fronts:  As dean, she:

“For the past five years, Dean Hammonds has been an important partner in our efforts to reinvigorate the student experience at Harvard College,” said Michael D. Smith, dean of the Faculty of Arts and Sciences.  “From helping kick off House Renewal to spearheading the development of Wintersession, Dean Hammonds has changed the College for the better, not only for today’s students but for generations of undergraduates to come.  As dean, she has been deeply committed to the well-being of students and passionate about supporting their opportunities to explore their academic and extracurricular interests.  I want to thank her for her work on behalf of Harvard’s undergraduates and to wish her well as she returns full time to teaching and scholarship.”

Hammonds noted that she has continued to teach and research during her deanship, juggling those responsibilities with the 24/7 nature of dean-related duties.

In 2008, Hammonds became the first African-American and the first woman to be named dean of Harvard College, charged with overseeing the academic curriculum, the Harvard residential Houses, and other key areas of college life for undergraduates. Formerly, Hammonds had served as Harvard’s first Senior Vice Provost for Faculty Development and Diversity.

With the expansion of financial aid, Hammonds said she was inspired to serve as dean in order to help the College meet the challenge of supporting a student body that has become the most diverse in Harvard’s history, with students from all over the world and from many different backgrounds.

“With access to social media and changing expectations of students for academic and support services, I wanted to make a difference and help the College better serve this population of students,” she said. “These are areas that really matter to students, and I worked to help units in the College meet these challenges.”

Born and raised in Atlanta, Hammonds graduated in 1976 with dual undergraduate degrees: a B.S. in physics from Spelman College and a B.E.E. in electrical engineering from Georgia Tech. She earned a master’s degree in physics from Massachusetts Institute of Technology (MIT) and started her career as a software engineer. She earned a Ph.D. at Harvard in the history of science, and then began her teaching career at MIT, where she was a founding director of MIT’s Center for the Study of Diversity in Science, Technology, and Medicine.

Hammonds will continue to serve on a number of boards and advisory committees. She is a member of President Obama’s Advisory Board on Historically Black Colleges and Universities and a trustee of Spelman College. She serves on the Committee on Equal Opportunities in Science and Engineering at the National Science Foundation and as an overseer of the Museum of Science in Boston.

Hammonds said she is eager to inaugurate the new program at the Du Bois Institute.

“Despite the inordinate impact that science and medicine have had on the lives of African Americans since their arrival in this country, scholarship on how our notions of race have shaped and have been shaped by the scientific and medical enterprise remains woefully understudied,” Hammonds said. “I want to continue work that I began at MIT to engage with scholars from around the world in transdisciplinary research on the role of race in science and medicine. There are many exciting questions to explore, especially with the explosion of genomics research. I am very pleased that the Du Bois Institute and Harvard will support this new program.”