Citizens United and beyond 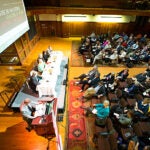 Obert C. Tanner, a jewelry store magnate who grew up herding sheep in Utah, put himself through college in the 1920s by getting up early every morning to light furnace fires. He died in 1993, but his philanthropy is still creating light and heat, predominantly through the Tanner Lectures on Human Values. Established in 1976, they are delivered annually at nine universities.

At Harvard this year, the Tanner Lectures were delivered May 1-2 by Dean Robert C. Post of Yale Law School. He took up an issue that generates a lot of heat but could use some extra light: the constitutional debate over campaign finance reform.

In 2010 the Supreme Court ruled on Citizens United v. Federal Election Commission, a case so starkly contentious that “constitutional arguments slide past each other with scarcely a moment of mutual engagement,” said Post. The issue centered on a single question: Should corporations be allowed to give political campaigns unlimited amounts of money? The Supreme Court, by 5-4, said yes.

At issue was the constitutionality of section 441b of the Bipartisan Campaign Reform Act of 2002, which banned corporations from funding “electioneering communication.” But a majority of the justices wondered: What was the government’s “compelling interest” in requiring the prohibition? Didn’t it violate free speech?

Arguments in favor of the reform law cited “three major state interests,” said Post: to promote equality, to remove the “distortion” that immense corporate wealth could invite, and to eliminate corruption. In the end, though, none of these interests was powerful enough in constitutional terms to sway a majority of justices.

To this day, Post said in his opening lecture, campaign finance reform remains “among the most vexing constitutional issues of our time.” Reformers still call the influx of cash a threat to political integrity. Advocates still argue that limiting contributions would limit free speech.

Constitutional law “is meant to affirm common principles of agreement,” said Post. But Citizens United was “instantly controversial and unpopular,” he said, and merely hardened positions in an already intractable debate. The majority opinion held that it was “stranger than fiction for our Government to make … political speech a crime.” On the other side, one critic declared that Citizens United “practically supplanted Dred Scott as the worst Supreme Court decision of all time.” The line was so bright between the two sides, said Post, it was as if they “inhabited entirely different constitutional universes.”

He called the divide “a horrifying disjunction,” but offered two reasons why it was a reality. For one, the Supreme Court has so far failed to clearly explain First Amendment jurisprudence, and for 80 years or more has relied on abstractions and rhetoric. So it is not possible for the court to “think carefully” about First Amendment principles and how they can be reconciled with campaign finance reform, said Post.

For another, he said, jurists who favor campaign finance reform have so far failed to show how the idea of such regulation is compatible with the idea of free speech.

To smooth the waters, Post offered his Tanner Lectures — rapidly paraphrased from a version 158 pages long, with copious footnotes — as a way for constitutional scholars to find common ground and to recast the debate. Perhaps “practical reform” would result from his Tanner ideas someday, said Post, but that was not his intent; nor would the lectures offer a concrete plan for mobilizing change.

Instead, he offered a strategy to get to common ground. First, establish that the First Amendment’s purpose is to make self-government possible. After all, he said, the 18th century bedrock of the United States was “the premise of self-government” and “the value of self-determination” — reactions to coercive and unrepresentative British rule.

After that, establish “a managerial domain” within the First Amendment — a way that “speech may be regulated as necessary to maintain the fundamental constitutional value of electoral integrity,” he said.

Without a sense of electoral integrity, “we are at risk,” said Post, especially in an era of increasingly expensive electoral contests. “The public cannot help but worry that he who pays the piper will call the tune.”