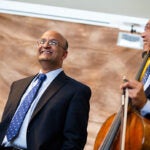 Garber steps back into classroom for freshman seminar on health care

As provost, Alan Garber’s job is to help all of Harvard’s Schools work as one, a role that requires a near-constant aerial view of the University. But for two hours each week, he gets to narrow his focus to just 12 students, laptop-wielding freshmen who on a recent rainy afternoon gathered around a conference table in Sever Hall in his class called “Health Care on Less than $8,000 a Year.”

The health care policy seminar, Garber’s first teaching experience at Harvard since he became provost in 2011, “has been one way for me to keep a foot in the world I used to inhabit,” he said. It’s also a chance for one of the University’s top leaders to connect with the youngest members of the Harvard community.

In his prior life as a Stanford University professor, Garber said, he mostly taught and advised medical students, business students, graduate students in economics, and postdoctoral fellows, a far cry from leading a freshman seminar. An institution at Harvard since 1959, the seminars provide a unique, small-group experience for the College’s newest students; their pass-fail grading system and discussion-heavy format allow a chance for more relaxed, expansive learning in schedules generally packed with rigorous lecture courses.

“It’s a wonderful time to get to know students,” Garber said of teaching freshmen. “You can reach them while they’re thinking about what they will study in college, and also what they will do with their lives.”

During his own tenure as a Harvard undergraduate in the 1970s, Garber changed his concentration to economics with the encouragement of a resident tutor in Dunster House. That early advice, he has said in the past, changed the course of his education and his entire career.

“I’ve been studying health policy issues for years,” said Garber, a physician who also earned a Ph.D. in economics at Harvard. But teaching a freshman seminar entails a different challenge: “You need to make the material understandable to people who aren’t in the field.”

To kick off that day’s class, Garber posed a question to his students: Would they pay for an expensive cancer treatment if it would give a dying patient a few more months to live? The group was skeptical.

“Just because something could help doesn’t mean a person is entitled to that thing,” Lauren Reisig said. Garber pressed her to name the ethical doctrine she was espousing. “Utilitarianism?” she ventured. (Correct.)

“It’s sad to limit care for people who require treatment,” added Jenny Gathright. “But what’s sadder is that people are denied care at younger stages of life for things that are much cheaper” to treat.

“You all seem to endorse the utilitarian perspective,” Garber concluded after a robust conversation — noting that the small group may not be a representative sample, given most Americans’ distaste for the idea of rationing healthcare. Traditionally, Garber told the class, the United States has never explicitly considered cost as a factor in deciding whether to provide life-saving treatments, but in many less-direct ways health care is constantly rationed.

“It’s just not talked about,” he said. In the recent national health care debates, “rationing was used as an epithet.” But in reality, “the only question is what form rationing takes.”

“Doctors in particular don’t like cost-benefit analysis, because they have a really hard time placing a value on lives,” Garber said. “But we’re doing it implicitly all the time.”

As the group discussed ways to design comparison studies of different treatment options’ costs, it soon became clear that measuring the costs and benefits of medical treatments is far from a straightforward process of plugging in data and crunching the numbers. For instance, how does one define a patient’s quality of life, let alone gauge how much it improves with a given treatment?

“It’s pretty simple, right?” Garber said wryly. “Except when you have to measure it.”

After a brief discussion of the requirements for their final paper proposals, the class adjourned, though a couple of policy wonks-in-training lingered to ask questions. For his part, the provost seemed more than pleased with his role as teacher to his young charges.

“I love getting back into the classroom.  It gives me a break from the rest of my day,” he said with a laugh. “It’s a tremendous opportunity to spend time with Harvard students who are so bright and so capable. They’re looking at these issues with fresh eyes. And they may come up with fresh solutions.”