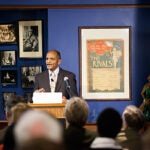 When the future doctors picked up their instruments Thursday evening, they were the musical kind.

The Joseph B. Martin Lounge in Vanderbilt Hall on the campus of Harvard Medical School (HMS) had been transformed into an arts space and performance venue. Though all the performers were HMS students, there was not a white coat among them. The evening was dedicated to their art.

“This night is to experience what we all do [outside of class], together,” said Christopher Lim ’10, an organizer of the event, an accomplished pianist and composer, and a first-year HMS student.

The event was part of the 21st annual Arts First festival, a four-day celebration of the visual, literary, and performing arts at Harvard that concluded Sunday night.

Until now, all of the Arts First events have occurred on the Cambridge campus. This year HMS, which had embraced the arts in the past, decided to bring the festival across the Charles River to showcase the talents of its accomplished artists, who also are in training.

Lisa Wong, assistant clinical professor of pediatrics at the Medical School, set the ball in motion.  Thinking that HMS should have a role in the festival, she approached Lim and Madelyn Ho ’08, also a first-year medical student with an arts pedigree, and asked, “What do you think?”

“They picked up the ball and ran with it,” said Wong, who in addition to being a pediatrician and professor is a violinist and pianist. For the past 20 years, she has been the president of the Longwood Symphony Orchestra, whose members are predominantly medical professionals.

Lim and Ho find that arts and medicine are complementary pursuits.

“In practicing music, you spend hours alone listening to yourself, and paying attention to the most subtle, ineffable aspects of the sound you produce. It’s an extreme form of concentration and takes incredible patience. That kind of focus translates into the medical setting,” said Lim, who completed a master’s degree in performance before pursuing his M.D.

Ho, who performed professionally for three years with the Paul Taylor Dance Company, said that in both medicine and dance there is a “fluidity” when moving from the subjective to the objective. “In dance,” Ho said, “as I am visualizing a dance or movement, I am able to move fluidly and constantly between ‘seeing’ myself as if from the outside like an audience member and feeling what the movement is like within myself.”

Ho said there is a parallel in medicine, where she needs to be able to observe the symptoms of a patient, but also put “myself in their position to understand their experience … on a very personal level.”

The idea that art can enhance medicine isn’t entirely new to Harvard, said David S. Jones, the A. Bernard Ackerman Professor of the Culture of Medicine, a joint position between the Faculty of Arts and Sciences and the Faculty of Medicine. “But it’s never been organized.

That’s why Jones, Wong, and other members of an ad hoc committee meet every other month to bring attention to the value art can add to HMS.

Cultivating an atmosphere steeped in art is a “valuable and interesting” thing to be doing, Jones said. “Not only is it valuable in its own right as a form of artistic expression, but it can enhance the community, and could possibly contribute to patient care as well.”

Wong hopes to create a resource for medical students to reassure them that they don’t have to give up their art when they become doctors. “In fact, we believe that being an artist enhances your ability to be a good doctor,” she said. She also wants to “promote the exciting research going on, like the neuroscience of music, arts and autism.”

For several years, HMS has offered an elective, “Training the Eye,” that is meant to improve the future doctors’ observational skills by seeing and talking about art during trips to the Museum of Fine Arts.

Physicians also come to the class to discuss the connection between art and their clinical practice. “For example,” said Ho, who is taking the class this semester, “we had a radiologist discuss how contours are important for looking at chest radiographs, and a neurologist discuss how noticing asymmetries in the face are important manifestations of different types of medical issues.”

At Vanderbilt Hall Thursday, the performances ranged from the sublime and masterful to the satiric and simply cool. A Chopin piece performed by Lim and a Puccini aria sung by Jacqueline Boehme HMS ’15 coexisted with a parody rap video and avant-garde poetry.

“It seems that every year there are more talented, accomplished, and innovative students coming into the medical school,” said Wong. “Which makes me feel even more inspired to get this work off the ground and help them in any way we can to continue their art form as they become the next generation’s clinicians.”

Arts First at HMS is sponsored by Arts&Humanities@HMS and by the Ackerman Program on Medicine & Culture.