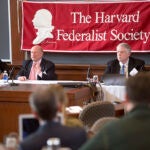 A question of balance

The world was a very different place in 1982, when the Mossavar-Rahmani Center for Business and Government was founded at Harvard Kennedy School (HKS) to promote applied research, teaching, and collaborative efforts to stoke public-private partnerships. Small-government thinking ruled under President Ronald Reagan, the Cold War loomed large, and the economic recession that plagued America turned out to be, compared with its 21st century counterpart, mercifully brief.

But Monday night at a John F. Kennedy Jr. Forum, where a crowd came out to celebrate the center’s 30th anniversary, it was clear that the center’s initial question of how business and government can best work together is still far from settled.

“Much has changed since [1982], but not the need for business-government engagement,” said HKS Dean David Ellwood, as he kicked off a lively debate moderated by Nina Easton, a Fortune columnist and former Institute of Politics fellow. “Indeed, I would say every one of the most important public problems we face across the boundaries between business, government, and civil society, nothing could be more important than the things we’re doing here.”

“Is America Working? What Business and Government Can Do” brought together a group of experts in business and government, including former Harvard president, economist, and current center director Lawrence Summers, for a discussion that touched on everything from public confidence in business to the government’s ability to respond to increasingly likely pandemics and natural disasters — perhaps a fitting topic given that the event, which had originally been scheduled for the fall, had been derailed by the arrival of Hurricane Sandy.

While Summers, who was Treasury secretary during the Clinton administration and director of the National Economic Council during the Obama administration, began on a general note of optimism about the country’s direction, he cautioned that business and government leaders should keep their eyes on the big picture: namely, the fact that living standards are stagnating and even declining for many Americans.

“For 200 years, it has been a reasonable assumption for the vast majority of Americans that their children were going to live more comfortable, better lives than they did,” said Summers, Charles W. Eliot University Professor. “And at this moment, this proposition is in doubt among a large number of our citizens.”

Polls show that fewer and fewer Americans have faith in Congress’ ability to solve problems such as growing economic inequality or stagnant growth. But business also must take responsibility and regain the public’s trust, said Benjamin W. Heineman, a senior fellow at the Belfer Center for Science and International Affairs and at Harvard Law School.

Corporations should seek to achieve high performance and high integrity alike, Heineman said, while managing potential risk on both fronts.

“We’ve gone through a period of very vivid cases where this has not happened,” he said, citing the 2008 financial collapse and the collapse of Enron Corp. “We’re lacking in statesmanship both on the performance side … and certainly on the integrity side,” as companies have shifted their responsibility to shareholders above consumers and have spent more time appealing to Washington than to the public.

Regardless of the public’s declining confidence in business and political leaders, there are structural factors that hinder leaders in both sectors from responding quickly to big problems, said Roger Porter, IBM Professor of Business and Government at HKS.

“We have a regulatory system that is very complicated … and we’ve got a great deal more complexity in our tax code,” problems that are compounded by the fact that there has been no major tax reform in the past 25 years, Porter said.

The overly complex system contributes to corporate leaders’ “reluctance and hesitance” to make big investments in operations on American soil, he said. Meanwhile, the federal budget, which is partially constrained by mandatory entitlement spending, doesn’t allow political leaders much room to respond nimbly to major concerns such as lagging infrastructure investments.

One cause for optimism, said Paula Dobriansky, a senior fellow at the Belfer Center, is that large corporations and the government are now working together on major domestic and international issues in new ways. The State Department, for example, has set up a fund for corporations and private groups to contribute to its work with refugee populations, a way to generate quick cash for important, practical work without the lengthy process of allocating tax dollars.

“It’s not a panacea, but it’s an element of a change,” Dobriansky said. “In foreign policy especially … corporations have had an important role.”

Summers was skeptical of making cozy bedfellows of business and government. After all, he said, “No company has used the word ‘public-private partnership’ as frequently as Fannie Mae, unless it’s Freddie Mac,” referring to the publicly supported lending agencies that faltered during the subprime mortgage crisis and required a federal takeover. In that case, there was “massive collaboration and massive disaster,” he said.