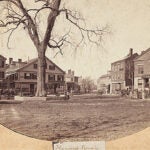 The ‘mirror with a memory’

Great jazz requires a strange alchemy of instinct and expertise, of empathy and teamwork from its musicians — a fact few know better than famed artist and composer Wynton Marsalis. Jazz is a conversation, but a nuanced, swift, and complicated one, he said.

At Sanders Theatre on Wednesday, Marsalis and a band of all-star musicians both discussed and demonstrated how to achieve that balance in “At the Speed of Instinct: Choosing Together to Play and Stay Together,” the fourth of Marsalis’ six-part lecture series at Harvard that began in 2011. Coming just two day’s after Monday’s bombings at the Boston Marathon, the performance provided a collective respite for the campus.

“No one knows better than Wynton that art and music are for times of sorrow as well as celebration, that the community they build is more important than ever as we turn to one another for comfort and for strength,” President Drew Faust said at the start of program. “He shows us that music is a means of capturing human experience that connects us to something larger than ourselves.”

Marsalis and his band began the night by playing a piece that Marsalis had written earlier that day to commemorate the city’s, and the country’s, anguish over the bombings.

“Sometimes the expression of grief is such a heavy feeling that only playing will suffice,” said Marsalis, managing and artistic director of jazz at Lincoln Center.

Jazz’s ability to resonate with people in times of deep sadness — or carefree happiness — stems in part from its ability to both harness and transcend time, to capture a moment and build on it through improvisation, he said.

“Ours is a time-obsessed time,” he said. “The art of jazz is the mastery of time, thousands of decisions made in an instant for the duration of a song. When we play, there is a supreme cognizance of the present, of the energy in being present, and of the intensity of presenting a collective insight into successive moments of present-ness.

“Together, you discover that adjusting to one another is as important a skill as soloing,” he said.

Jazz offers other unexpected lessons as well, he said: that sometimes the best solution to a group’s problem is not to play, that sometimes “you can create more freedom by sacrificing your own.”

With its intense focus on time, jazz teaches that “everyone lives with their own relationship to time,” he said. “Jazz people will never press you about where you were or who you were with or what time you did this or that.”

And in a nation that is engaged in constant battles over cultural change, jazz offers “the art of managing change without losing the focus on substance.”

As technology takes over more and more aspects of daily life, he said, jazz can remind Americans to connect with each other, and to their musical and cultural history. After all, you can’t play good jazz without being rooted in the moment and focusing on your fellow musicians — a rare thing in an era when much of popular music can be produced without two musicians ever setting foot in the same room, he added.

“Jazz teaches you how to be a person, and how to ripen your personhood through empathy,” Marsalis said. “Even at its most complex, it tells you: Everything is going to work out because we’re going to make it work out.”

They walked the audience through four foundational jazz styles (swing, blues, Afro-Cuban Hispanic, and ballad), stopping after each one to explain how they had played off the others, had read their decisions, and had reacted to where the improvisation was headed.

Often, that means listening with as much intensity as you play, the musicians said. In a way, the band’s playing amounted to a conversation that none but the most trained members of audience could understand.

“It’s like if you’re talking to somebody — they want to talk too,” Roberts said.

Blanding agreed that listening was crucial.

“That collective intelligence matters,” Blanding said. When he isn’t playing sax, he said, he could start thinking about what he’d play next. But that approach doesn’t always work: “When you try to reattach yourself to what’s happening [with the rest of the band], you often find yourself out of place.”

The band’s instinctual interactions require a “tremendous amount of concentration,” Marsalis said, that can take years of practice for its members to master. It also requires humility and restraint, especially from the rhythm section, Jackson said.

“Drums have a lot of power, so you have to be sensitive about the use of the power,” he said. “It’s like if a king just killed his whole community — there’d be nobody to worship him.”

The band, and the audience, laughed. “That was a real look into the psychology of a drummer,” Marsalis said.