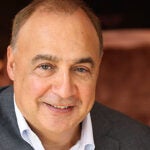 First use of revamped campus common space is as marathon memorial

In the wake of tragedy, people gather to support each other, and to give thanks for family, friends, and community. After the Boston Marathon bombings and the area shutdown during the search for the suspects, the Harvard community has been doing just that.

After the lockdown ended, President Drew Faust wrote, “Times like these test our resilience and call forth our humanity.”

At daybreak on April 24, the day of a memorial service for slain Massachusetts Institute of Technology police officer Sean Collier, 20 stark whiteboards with the words “Boston Strong” and “Harvard Remembers” bannered across their tops appeared in the newly renovated plaza near the Science Center. A stream of yellow, potted daffodils lined the area, where passersby were invited to take up dangling pens and share their thoughts or feelings.

The project, called the “remembrance walls,” was the brainchild of the Undergraduate Council (UC), which wanted to provide an outlet for students to express themselves.

“The remembrance walls are a beautiful testament to the power of community,” said Tara Raghuveer, the UC president who, along with vice president Jennifer Q. Zhu, brought the council’s idea to the president’s office. “The students were interested in thanking the staff in the Houses and police at Harvard and in Boston and Cambridge for all their help. It was a tragic series of events, but the silver lining is we were able to come together and be reminded that so many people are dedicated to our safety and security.”

The students joined with the Harvard Common Spaces Program, which had been planning a commemoration on the revitalized plaza. Armed with the students’ idea, Harvard staff constructed the boards and placed 3,000 flowers throughout the plaza and in other common spaces for passersby to take home.

“It was an amazing first use of a new common space,” said Zhu. “The plaza offered a central location where people could come together to reflect on a disconcerting series of events over the past week.

“It was so meaningful to see students, professors, administrators, even tourists gathered together to express themselves, share the moment, and be part of a community,” Zhu continued. “It was really for the people.”

By day’s end, the boards were full of thoughts and feelings, thanks and condolences.

“Everything that happened that day — from the remembrance walls to the daffodils — gave students a great sense of community, [a feeling] that Harvard was there, taking care,” said Zhu.

The walls, which were on display during Harvard’s Arts First festival (April 25-28), will remain in place through the end of the week.