Humanities in the digital age 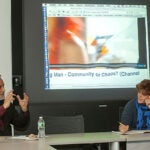 In search of sacred spaces

This may be the digital age, but techies and code writers aren’t the only ones who can thrive in it. Humanists say they should not be overlooked in the increasingly digital world.

To many people, the word “humanist” conjures images of a scholar isolated in a hushed, dimly lit room, surrounded by stacks of books. But that stereotype no longer holds true, according to a panel of experts brought together to discuss the emerging and growing field of “Digital Humanities.”

“We want to show both undergraduates and graduates that studying the humanities in all its forms is an extraordinarily useful way of getting ready for the outside world. Humanistic learning gives you habits of mind with posing questions, with making arguments, and a certain rigor in dealing within climates of diverse opinions,” said Diana Sorensen, James F. Rothenberg Professor of Romance Languages and Literatures and of Comparative Literature.

Sorensen, who it was recently announced would continue as Dean of Arts and Humanities for three more years, moderated the discussion in the Lamont Library Forum Room titled “Digital Humanities: Across the Spectrum,” which focused on how humanists’ training and skills are translating and being utilized in today’s digital society.

About 80 graduate students, postdocs, undergrads, faculty, and staff packed the Forum Room to hear about how humanists play a big role in the digital age.

Gregory Nagy, Francis Jones Professor of Classical Greek Literature, told the crowd it isn’t necessary to be well-versed in code to flourish in today’s culture.

“When it comes to digital literacy, the thing to do is to go out and train humanists. It’s that simple, because they are a very quick study,” said Nagy, who is also the director of the Center for Hellenic Studies. “There’s an army of humanists who have been trained to do humanities, but from a digital standpoint.”

Lenny Muellner, director of publications and IT at the center, added, “It’s amazing what happens when you take somebody whose basic training is in humanities and you teach them how to program. It becomes a creative experience of astonishing proportions. So we try to employ as many and increase the numbers of those people who combine those things.”

Jeffrey Schnapp, a pioneer in digital humanities and director of the metaLAB at Harvard, said that modern humanists must utilize new skill sets to adapt to the changing world.

“Most digital humanities projects often bring large-scale, collaborative projects into the field, which requires the kinds of skills associated with teamwork, with working with diverse populations with differing expertise,” said Schnapp, who is also a professor of Romance languages and literatures. “The digital humanities are not simply about creating a kind of new universal humanist who can also code in addition to being able to read ancient Greek.”

Beth Altringer, a visiting lecturer at the School of Engineering and Applied Sciences, pointed out that advancing technology is providing the ability to collect and store vast amounts of information, which in turn provides humanists with “entrepreneurial opportunities” as more and more data is collected.

“The challenge and the opportunity for humanities is how do you quickly analyze all this data?” Altringer said.

“Digital Humanities: Across the Spectrum” was co-sponsored by the FAS Office of Career Services, Division of Arts and Humanities, and Office for Postdoctoral Affairs.