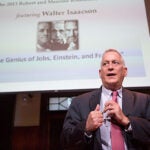 By Thomas Lee Office for the Arts Communications

A renowned interpreter of the great American songbook and musical theater repertory, Barbara Cook surprised the audience during her opening remarks at a recent Harvard master class by quoting a maverick music-maker.

“The great jazz saxophonist and composer Charlie Parker once said, ‘Music is your own experience — your thoughts, your wisdom. But if you don’t live it, it won’t come out of your horn.’”

On Broadway, Cook was the original Cunégonde in 1956’s “Candide,” composed by Leonard Bernstein ’39, and Marian the Librarian the following year in “The Music Man,” created by Meredith Willson. Over her career, she attained legendary status as a performer on concert stages, the cabaret circuit, and recordings. In 2011 she received Kennedy Center Honors, which recognized the now 85-year-old for her “purity of tone, warm timbre, jazzy timing, and impeccable diction.”

But in the Farkas Hall rehearsal studio last Thursday during the master class sponsored by the Office for the Arts’ Learning From Performers program and Celebrity Series of Boston, she was a teacher, eager to pass on her wisdom and experience to six Harvard undergraduate singers.

“I’m here to set you on the road to living through song,” she informed them. “Of course, singing is about notes, but it’s so much more than just notes.

“It’s wonderful if you have a perfectly beautiful voice, but you don’t have to have that to communicate through song. Really good intonation and a good sense of rhythm are certainly helpful, but you don’t have to have the greatest voice in the world. What you have to do is set yourself on a journey to learn who you are and how you fit into the world.”

In essence, the journey is about self-discovery, Cook said. “Singing is a very vulnerable thing to do. It’s scary. We can’t put all of our defenses down in life, but when you’re singing you have to take off your emotional clothes in front of your audience.”

Performing “If I Loved You” from Richard Rodgers and Oscar Hammerstein’s “Carousel,” Kyra Atekwana ’14 was advised by Cook to “make it seem as if you’re talking to your intended; make it like a dialogue.” To help the lesson, Cook asked Eric Padilla ’14 to sit opposite Atekwana. “Look directly into his eyes when you sing,” she said.

For his part, Padilla was encouraged to softly articulate the emotion behind the ballad he performed, “I Have Dreamed” from “The King and I,” also by Rodgers and Hammerstein. “You have a great voice,” Cook said. “But try to speak it more — not so much articulation. It should sound more natural.”

For a few of the students, putting technique aside for a more conversational and emotional approach was challenging. Cook encouraged Jeremy Venook ’15 to “embrace who you are” after he performed “Lucky to Be Me” from “On the Town” by Bernstein, Betty Comden, and Adolph Green. Repeating the song, he was interrupted several times with admonishments to “Let us in!” and “Tell us about it! Don’t sing about it — fill it in!” The result was a breakthrough for Venook, who received a lengthy ovation from the audience.

“You got it out of your horn!” exulted Cook, who hugged the young performer. “You see? If you do it fully, you’re home free.”