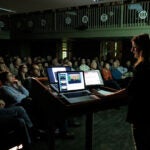 Scientists with the European Space Agency’s Planck satellite program released findings last week that refined our understanding of the universe, showing it to be a little older, containing a bit more mysterious dark matter, and expanding a tad slower than previously thought.

The satellite, launched in 2009, provided the most precise map so far of what scientists call the “cosmic microwave background,” the faintest echoes of the universe 370,000 years after the Big Bang, the originating cosmic explosion. That later time represents a key moment in the universe’s history, when the hot gas from the Big Bang finally cooled enough to become transparent, allowing radiation to escape for the first time.

In a question-and-answer session, Gazette Staff Writer Alvin Powell talked with Harvard Astronomy Department Chair Avi Loeb, the Frank B. Baird Jr. Professor of Science and a theoretical astrophysicist studying the early universe, about the findings.

GAZETTE: What can you tell us about the Planck satellite and the data that was released last week?

LOEB: This experiment is the most precise map that we have ever had of the temperature fluctuation of the cosmic microwave background. The bottom line is not really revolutionary or paradigm-changing, however. Basically, it’s a confirmation of the standard model of cosmology, but with much better data than we had.

GAZETTE: What is the cosmic microwave background?

LOEB: The cosmic microwave background is the radiation left over from the universe’s early hot, dense phase.

The universe became transparent to this radiation about 370,000 years after the Big Bang. Prior to that, the gas was much too hot to make atoms. Free electrons in the gas were able to scatter the radiation very effectively. As soon as the universe cooled below a few thousand degrees, electrons and protons combined to make hydrogen atoms. Once electrons were trapped in atoms, radiation was able to stream freely.

What we see from the cosmic microwave background is that there were small differences in the temperature or the brightness of the radiation from one region to another, and that’s what we’re trying to map.

GAZETTE: Why does the temperature of the early universe matter, and how is that related to the universe today?

LOEB: Variations in temperature in the microwave background represent variations in the density of matter in different regions. That’s how objects were made. The Milky Way galaxy, for example, was made from a region that had higher-than-average density that ended up collapsing on itself.

So when we look back in time at the microwave background, what we’re looking at is the initial conditions that led to the formation of structure we see today in the universe.

That’s why it’s so important, because it teaches about the early conditions in the universe that led to the formation of structure and complexity in the form of galaxies and groups of galaxies today.

It is sort of like a Rosetta stone. By reading it off, by reading those maps and statistically measuring the level of variation, we can actually decipher what the initial conditions in the universe were.

It’s also important for fundamental physics, because the nature of dark matter and dark energy, as well as the question of what produced these variations in the density of matter from one place to another, remain a puzzle.

GAZETTE: What revisions did the new measurements make in our understanding of the universe?

LOEB: It made the universe a little bit older than we thought, 13.82 billion years old instead of 13.75 billion years. It’s not a major revision.

If you look at the cosmic pie in terms of the budget of matter in the universe today, the amount of dark energy went down. It was previously 72 percent and is now 68 percent. Ordinary matter stayed at 4.5 percent, and dark matter is now 27.5 percent. These are very small changes. Overall, the picture remained the same.

The other thing that changed is the Hubble constant, the rate of expansion of the universe. The best value for it now is 68; previously it was close to 70 kilometers per second per megaparsec.

The other thing was that in recent years there were suggestions for revisions to the standard model of cosmology. Some people suggested there was a fourth generation of neutrinos (low-mass subatomic particles). We know of three neutrino species in particle physics, but there may be evidence in some data sets for a fourth neutrino. The need for a fourth neutrino was removed with the Planck data.

Planck also addressed questions about whether the geometry of the university is flat or curved. According to Einstein’s theory of gravity, space-time can be curved. Planck found that the universe is flat.

Early on, the universe inflated from very small to a huge scale. That inflation served as a cosmic iron. It basically flattened any ripples that were imprinted on space because it took a small region and stretched it, just like when you take a balloon and blow it up. When a balloon grows very big, the radius is so huge that when you’re sampling a small portion, it appears very flat.

That’s what inflation did; it inflated the universe to have a very flat geometry. We know that to the precision of a tenth of a percent now.

So basically what Planck is doing is tightening the error budget that we have on all the cosmological parameters, but it doesn’t change the standard cosmological model.

GAZETTE: There was some mention in reports of the data showing the universe being lumpier than initially thought. What about such anomalies?

LOEB: The microwave background is lopsided slightly … the statistics of the variations of the temperature in one hemisphere is different from the opposite hemisphere. I would say the evidence is sort of marginal. It doesn’t make the entire community say, “Oh, something is fundamentally wrong with the standard model.”

On the other hand, it’s on the borderline of being peculiar, and so some people are thinking about it. Maybe it does give us a hint of something beyond the standard model of cosmology.

Then there’s a cold spot in one region of the sky, which was also known before, though Planck showed us the crispest image we have. If you ask yourself, “What’s the chance of seeing a cold spot of this size,” it’s not negligible; it’s quite possible that this is just random.

A reasonable cosmologist would sleep well and say it’s just a fluctuation and random deviation, but there are some who are thinking about it. It may be possible that it tells us something about physics beyond the standard model.

GAZETTE: So what are the overall lessons from the Planck data?

LOEB: The big picture is that it confirms what we thought about the standard model of cosmology.

The truth, though, is that we still don’t understand what the dark matter is, and we don’t know what dark energy is. So even though we can pat ourselves on the back that we know the composition of the universe to a very high precision, and we sort of understand how to describe statistically the initial conditions of the universe on the microwave background sky, we still have gaping holes in our understanding of the substance of these components, and that remains unanswered by the Planck data.

To answer those questions, we need more data in cosmology, or maybe laboratory experiments that will reveal the identity of the dark matter and, possibly at some point in the future, what dark energy is made of.

It sharpens our ignorance about the nature of the dark matter and dark energy. It makes it even more exciting to figure out what they are.