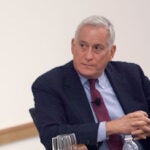 Whether candid or staged, rare 19th-century images offer insight into a fading America

In 1879, three years after Gen. George Armstrong Custer died in battle at the Little Bighorn, Harvard purchased two albums of photographs that included rare images of an American Indian world that was even then vanishing rapidly.

Assembled by the U.S. Department of the Interior in 1877, these two volumes were intended to partially document the Indians of North America since the 1850s. Among the 1,005 images are photos of costumes, crafts, and dwellings — but especially of warriors, wives, maidens, children, and chiefs.

In an email, Castle McLaughlin, associate curator of North American ethnography at Harvard’s Peabody Museum of Archaeology and Ethnology, called the photos of the chiefs “very rare and in most cases virtually unique images of some of the most important Plains leaders of their day.”

“These albums constitute important primary-source materials,” Robert Burton, Harvard Library cataloger for photographs, said in an email. From his post at the Weissman Preservation Center, he rewrote the albums’ original descriptions from 1879, which were scant and incomplete.

Burton said the albums’ images support the idea of “the white man’s Indian,” a concept explored in historian Robert F. Berkhofer Jr.’s 1979 book of the same title. Under that explanation, white racism is evident in the doubleness of Indian portrayals going back to the days of Columbus. Depicted are only noble savages or bloodthirsty heathens. The first seem worthy of submission; the second require submission.

Photographs have been mounted in albums since the 1840s, said Burton, and Harvard collections include many such holdings of “scientific, expeditionary, or ethnographic photographs.” Since many other collections have been lost or little studied, Burton said that makes the Harvard albums important to historians.

The albums came from one part of the U.S. Geological and Geographical Survey of the Territories, a report of four Lewis and Clark-like expeditions undertaken from 1860 to 1878. The limited-edition volumes were compiled on orders from survey leader Ferdinand Vandeveer Hayden, a physician turned geologist whose energetic ways earned him the Indian name Man Who Picks Up Stones Running.

In a prefatory note to the albums, Hayden called the images “faithful sun pictures” of 25 tribes over 25 years, and he mourned their loss and alteration to the reservation system. “The value of such a graphic record of the past increases year by year,” he presciently wrote.

About a fifth of the album photographs were drawn from images already possessed by the federal government, including daguerreotypes that had to be rephotographed for display. Most came from the collection of English philanthropist William Blackmore. A fraction came from Hayden’s survey photographers, including William Henry Jackson (1843-1942), who assembled the album.

The two albums not only preserve rare images for historians, they revive the names of Hayden and Jackson. The latter’s Western landscapes later inspired photographer Ansel Adams. They also directly influenced Congress to found Yellowstone National Park in 1872, the first such area in the world and the first U.S. acknowledgement that the wild was worth preserving.

The albums’ images are captioned with short essays on tribes, Indian personalities, and ethnographic detail. The albums document many Indian ways and personalities.

Jackson’s portraits of Indians near Omaha, Neb., just after the Civil War — taken to satisfy American appetites for images of the real West — got him hired onto the federal survey team. He called the Omaha photos missionary work, which required days of travel on a buggy stacked with water, chemicals, and a portable darkroom. He paid his Indian subjects with cash, tobacco, knives, and old clothing.

In his 1940 autobiography, “Time Exposure,” Jackson remarked that the America of that period was “a hurly-burly era of thievery and abuse,” but that the surveys had a sober purity of purpose because of the straight-edge Hayden, whose only passion was to “inform America about Americans.”

Examined page by page, the albums transcribe the fateful arc of American Indians as the United States pushed westward. The earliest photographs show stoic warriors in leather and beads. Then come warriors in group pictures, among translators and officials during treaty visits to Washington, D.C., followed by studio portraits of dark-skinned men cinched into Western clothing. Those are followed by pictures that prefigure America’s attempts at monocultural modernity: Indian children on schoolhouse steps.

For most of the last 140 years, the two outsized volumes — as big as serving platters and as heavy as iron — were cataloged as books. Hidden between covers and not outlined in the card catalog, the rare images apparently languished on Harvard shelves, first at the Peabody and then at the Tozzer Library, where they now reside, highly appreciated.

The albums were pulled from obscurity about a decade ago, when the University began a comprehensive survey of its photographic library holdings. (About 10 million images have since been uncovered, identified, recataloged, and in sometimes digitized.)

When Burton recataloged the two albums, said Janet Steins, the associate librarian for collections at Tozzer, he added what is now a commonplace hint for researchers online: “[graphic],” which indicates that a library holding includes images. (It was Steins who discovered the albums and who arranged for them to be repaired and digitized.)

The albums weathered their Harvard years well, but they required some work at the Weissman before being digitized. Two years ago, book conservator Katherine Beaty replaced the leather covering on the spines, using special tools to impress the titles. Then photograph conservator Elena Bulat, with help from intern Tatiana Cole, cleaned each heavy-paper page and albumin image with soft brushes and cosmetic sponges.

Online, paging through the albums is like desktop time travel. The images are crisp and documentary, but they also sometimes shimmer with irony. One Indian chief, with bow drawn, poses behind a papier mache rock. Another, seated in a studio chair and looking skeptical, shakes the hand of a white man.

The text opens a window onto Indian tribes and bands that have fallen into obscurity. Meet the Rabbit Lake Chippewas, the Otoes, the Poncas, the Wacos, and the Bannocks.

The Indians’ names harken back to a distant past that was both more literal and more magical than today. There are pictures of Big Foot, Pretty Rock, Ear of Corn, Skin of the Heart, He Kills First, Jumping Thunder, He Goat, Graceful Walker, and On a Fine Horse.

One of the names expresses what the albums’ dogged archivists can only wish: Seen By All.