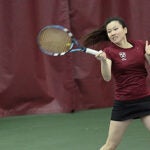 By Photos and text by Jon Chase / Harvard Staff Photographer

At first glance, physics and basketball seem worlds apart, but at Harvard they’re connected in more ways than one. Take Physics Night at Leverett House, for example, and an intrasquad basketball game at the Malkin Athletic Center (MAC) — two activities that develop both mind and body, nurturing the individual and the community simultaneously.

Physics comes into play in basketball whenever a player jumps in the air to shoot or rebound. What enthusiasts call “hang time” — when a player appears frozen at the peak of his leap — is the result of projectile motion.

When a player springs upward, the strength of the vertical velocity thrust determines the time he spends airborne. There’s also a horizontal element of velocity, but that remains constant throughout the jump, since gravity doesn’t play a role.

Howard Georgi, Mallinckrodt Professor of Physics, said Physics Night started in 1998 when three things coincided: He became master of Leverett; the dining halls were opened for study during off hours; and problem sets in several physics classes were due on Thursday mornings. The confluence meant that many students began working long into Wednesday nights, and Georgi was there to help.

Soon, professors started sending their teaching fellows to Physics Nights, and even came themselves. The advent of Brain Break, during which students study late with food near at hand, reinforced the practice. Now, Physics Night is an institution that fills the dining hall with laptops and animated dialogue about physics — except, of course, when the talk is on the court at the MAC, where Leverett basketball players talk of “give-and-go” or “cutting to the basket” as they take a study break.