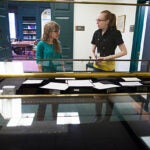 Actor Jason Alexander is best known for playing the neurotic George Costanza on the long-running television comedy “Seinfeld,” a series that reveled in the concept that it really was about nothing.

On Thursday afternoon, Alexander visited Harvard, where he talked about something — in fact, many things.

“What a handsome couple!” he declared, gesturing grandly to a portrait of Thomas and Virginia Cabot as he strolled into the Cabot House living room for a cozy conversation with about 60 students and moderator Alicia Anstead.

During the candid chat, Alexander reminisced about growing up in New Jersey. “Painfully shy and a bit dysfunctional” as a child, he said magic was a way for him to interact with others (magician Mark Wilson had a tremendous influence on him when he was 6 years old). But when he got older he was advised not to pursue the craft — his small hands are not good for palm tricks, and his aversion to danger isn’t good for escape tricks — and at about the same time, when he was 13, a girl asked him if he could sing. To impress her, he said he could, and found himself playing a Von Trapp child in a local production of “The Sound of Music.”

He never looked back.

Alexander has had a diverse and successful career, from winning a Tony Award for “Jerome Robbins’ Broadway” to writing the book “Dad, Are You the Tooth Fairy?” In addition to comic acting, he’s been a singer, dancer, director, children’s book author, magician (still), champion poker player, and a father of two. He’s even helped a director rewrite cue cards for a beer commercial so the ad’s star, Yankee catching legend Yogi Berra, could understand them.

Anstead at one point rattled off a long list of his creative endeavors until Alexander stopped her. “I’m in a video game?” he asked, sincerely surprised. “What one?”

“It’s all part of the same thing,” he continued. “It’s all creative. Poker is an acting job.”

The formula to become a doctor or a lawyer is clear, Anstead said, but what’s the prescription for a career in the arts?

“No one can prevent you from being an artist,” Alexander declared. The most any artist can do, he said, is give people more to see through their eyes — and that kind of interaction is imperative for humanity to thrive.

Alexander told about a time a group of U.S. Marines approached him in a restaurant. They saluted him, and their leader explained that they had just left Iraq and were bound for Afghanistan. In the darkness in Iraq, one of them said, the platoon would spend hours after an ugly day watching “Seinfeld” DVDs, and that helped to restore their humanity. That’s what art is about, Alexander said.

Later, during a question-and-answer session, a student asked Alexander to name his favorite “Seinfeld” episode. No favorite, he said with a grin, but the three episodes that had the greatest impact on him were “The Chinese Restaurant,” “The Parking Garage,” and “The Contest.”

Asked what he’d like to do that he hasn’t yet, Alexander expressed a deep, passionate desire to act and sing in the dark musical “Sweeney Todd,” and offered a blood-stirring analysis of the character.

After his talk, Alexander turned the stage over to the Veritones, and joined the audience to enjoy their performance.

The session was part of the Learning From Performers program of the Office for the Arts at Harvard, and was supported by the Bernard H. and Mildred Kayden Visiting Artist Fund.