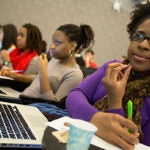 The dark side of chocolate

Biographer will discuss Einstein, Franklin, and Jobs at Radcliffe on April 8

Best-selling author and journalist Walter Isaacson will present the 2013 Maurine and Robert Rothschild Lecture, “The Genius of Jobs, Einstein, and Franklin,” on April 8 at the Radcliffe Gymnasium. Sponsored by Harvard’s Department of the History of Science, the lecture will begin at 6 p.m. It is free and open to the public, with a reception to follow.

Isaacson, currently the president and CEO of the Aspen Institute, is the former chairman and CEO of CNN, former managing editor of Time, and best-selling author of a number of biographies, including “Einstein: His Life and Universe” (2007), “Benjamin Franklin: An American Life” (2003), “Kissinger: A Biography” (1992), and “Steve Jobs” (2011).

Recalling when Jobs approached him about writing a biography, Isaacson wrote, “I had recently published one on Benjamin Franklin and was writing one about Albert Einstein, and my initial reaction was to wonder, half-jokingly, whether he saw himself as the natural successor in that sequence.”

Reflecting later on what he learned during the process, Isaacson, in an October 2011 New York Times opinion piece, concluded that Jobs did share certain traits with his other subjects — the elusive qualities that allowed them, in the words of Apple, to “Think Different.”

“In the annals of ingenuity, new ideas are only part of the equation,” Isaacson said. “Genius requires execution. When others produced boxy computers with intimidating interfaces that confronted users with unfriendly green prompts that said things like ‘C:>,’ Mr. Jobs saw there was a market for an interface like a sunny playroom. Hence, the Macintosh.”

Made possible through the generosity of Maurine and Robert Rothschild, the Rothschild Lecture Series aims to bring the interest and excitement of the history of science to the Harvard community and beyond.