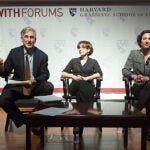 The 300 block of Broadway in Cambridge, less than a mile from Harvard Square, was once called “antiques row” for its shops that sold gewgaws and thingamabobs from the past.

But now it’s the future that’s on display there. Three Harvard Internet entrepreneurs have rented an office on the block, where they hope to help change the face of modern digital media.

Their engine of change is Zeega, a software platform and social network they are launching today. It provides an intuitive way for Internet users to harness the Web’s riches of text, imaging, and audio for multimedia stories.

Journalists can use the platform to shape their reports (and have, as in this piece from last week on the gun debate). Academics and students can use it to enliven class projects (and have, as in “Information Overload” from a Harvard course last fall). Web surfers can use it too (as in these playful combinations of music and animation that harken back to YTMND, an early Internet classic).

Joining Shapins in the enterprise are economist James Burns, Ph.D. ’10, also a GSD lecturer, and journalist Kara Oehler, RI ’12, a Film Study Center Fellow at Harvard this year. “Media is changing,” said Shapins. “We want to invent the next thing.”

The digital entrepreneurs first worked together years ago on Mapping Main Street, an interactive project created in collaboration with journalist Ann Heppermann and supported by Harvard’s Berkman Center for Internet & Society and the Association of Independents in Radio. Jammed into a 1996 Subaru station wagon, they set off along a 15,000-mile journey to make audio and video documentaries of American streets named “Main.” (Today, the site invites collaborators nationwide to furnish more stories of America’s Main Streets — an estimated 10,466 of them.)

“We didn’t know what it was going to be,” said Berkman Center managing director Colin Maclay of the early project, “just that it was neat.”

On the road, the Zeega team saw many colleagues in the media who had great ideas for immersive stories. But they also saw that these hopeful storytellers had a hard time manipulating the contents of the Web because of barriers in technology, design, and cost.

More media than ever is being recorded and made public, they say, but the shapes that online stories take remain dominated by a few platforms. “They all start to look the same,” said Shapins, “in the same rigid feeds and boxes.”

So Zeega began at that juncture. Its designers dreamed of a platform that would revolutionize interactive storytelling, and give the Web a way to reach its potential as a medium that can be shaped by anyone.

Zeega was soon recognized for its potential as a new actor in the shifting landscape of American media. In 2011, the project was among 16 winners of the Knight News Challenge, a prestigious prize that had then attracted 2,500 proposals for changing the face of media storytelling.

The Knight start-up grant, amounting to $420,000, was used to improve the software to its present form, which is now available for free to anyone. The grant made a prototype Zeega platform possible, and it enabled an early global Zeega community, which today ranges from people sharing love letters in Argentina to journalists documenting protests in Greece.

The Zeega team is at work at the Broadway office, a narrow, brick-walled, high-ceilinged space partitioned for a onetime antiques shop. The three principals were there in late February getting ready for a four-month stay in San Francisco. They won a competition to be among six startups in the first cohort at Matter, an “accelerator,” Shapins said, for companies that intend to “change media and journalism for good.”

Matter is giving each of six startups $50,000, a common location in San Francisco’s SoMa district (to help build a creative community), and four months of “runway,” that is, time to develop audiences and tweak products. All six will show what they have to the Matter community, the media, and to investors on a “demo day” scheduled for June 13.

“It was really selective, and the competition was very fierce,” said Maclay of being selected to the first Matter group. “It’s a high-flier kind of crowd.”

Shapins called the opportunity in San Francisco “an incredible convergence of people with the same interests: storytelling and technology.”

Matter is the brainchild of Jake Shapiro ’93, CEO of Public Radio Exchange in Harvard Square and a senior researcher at the Berkman Center. “There’s dramatic change happening in how people experience and consume and create and find media,” he said. “We think it’s important to have a major stake in the startups that are going to — some of them — define these new means of experience and access.”

Zeega improves access to a diversity of Internet content, its founders say, and helps its users discover new modes of storytelling in a digital age.

For one, it’s time to set aside the inflexible templates of online content, like Facebook’s boxes and lines, said Shapins. And it’s time to challenge the limited aesthetic of “the scrollable list” that he said dominates the blogosphere, which leaves out layers of audio, images, and video. By contrast, said Shapins, “Zeega lets anybody — truly anybody — access media online and create their own material. The Web becomes their palette.”

During its first 18 months of tweaking and testing at Harvard, Zeega got a lot of play. Radio, print, and video journalists are using it domestically, including in Massachusetts, Ohio, North Dakota, and Texas. Journalists in Brazil and Argentina are already using the Zeega platform as an aid to storytelling.

Journalist Paul Salopek, a two-time winner of the Pulitzer Prize and a 2011-2012 Nieman Fellow, is using the Zeega platform for his “Out of Eden” project, which is a 21,000-mile, seven-year walk to retrace the steps of the human diaspora out of Africa and into the world.

Zeega also has already been widely used in Harvard classrooms, in courses taught by Shapins and Burns, for instance, and in a course co-taught last fall by Peter Galison, the Joseph Pellegrino University Professor, and Jeffrey Schnapp, a Professor of Romance languages and literatures who directs both the Berkman Center and the metaLAB @ Harvard.

The program also has been widely used by storytellers in the framework of the Sensory Ethnography Lab, an arm of Harvard’s Department of Anthropology.

“They did a great job selling it,” said Maclay of Zeega’s three designers, “and people realized this was a really cool, useful thing.”

Zeega has its uses both inside and outside the university gates. Scholars, journalists, and Web geeks can use it, along with storytellers from Main Streets everywhere. “Innovation crosses borders,” Shapins said of Internet media, which is changing fast as paradigms of content and delivery shift. “It’s a special moment.”

That special moment owes a lot to Harvard, he added, where a lot of experimental thinking and work is being done on media issues. “Harvard is a seedbed for media entrepreneurs,” said Shapins, even beyond the iconic Harvard origin stories of Microsoft and Facebook. Within the University’s digital innovation support network, he mentioned metaLAB, Sensory Ethnography, the Harvard Innovation Lab, the Harvard Library Lab, and Cambridge-area investors such as the xFund.

Maclay called Zeega “a great example of students and fellows coming from Harvard, identifying a priority, and then spinning it out into the world in a way that could be really transformative.”

Zeega will continue to experiment, interacting with its growing community of users. “It’s a culture of constant feedback and improvement,” said Shapins of their brave new media world. “And being immersed in San Francisco is an unbelievable catalyst.”