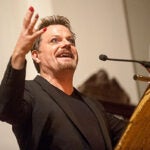 Faith not in God, but in humanity

Warren E.C. Wacker, former Henry K. Oliver Professor of Hygiene Emeritus, died on Dec. 29, 2012. Wacker held various positions at Harvard over the years. He was an investigator at the Howard Hughes Medical Institute from 1957 to 1968, served as an associate professor of medicine from 1968 to 1971, and was named the Henry K. Oliver Professor of Hygiene in 1971. From then until 1989, he also served as the director of Harvard University Health Services, as well as a House Master to Mather, Kirkland, and Cabot Houses.