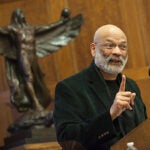 The multiyear, multicity collaboration is designed to use the arts to re-imagine America’s transformative clash of 150 years ago. New plays and other performances will be commissioned through the project, organizers said, and the member universities will create related academic courses, lecture series, and other programs.

Collaborators on the project will convene national conferences, expert roundtables, community programs, and public discussions. There also will be student exhibitions and playwriting projects.

The Harvard-affiliated American Repertory Theater will take part. Artistic director Diane Paulus praised the “opportunity to explore the American Civil War, and the civil war as it continues in our world today.”

The project’s core idea is to use the lens of the arts to look back at the period that brought slavery to an end, spawned some of the nation’s most enduring personalities and images, and fired up factories and military might that helped to turn the country into a modern world power.

Harvard President Drew Faust, who was at the luncheon, said, “The arts invite a shift in perception and understanding that is at the heart of all learning.” She is also the Lincoln Professor of History, a Civil War scholar, and most recently author of “This Republic of Suffering: Death and the American Civil War” (2009).

Paulus praised one of the Faust’s consistent themes, “that the arts should play an important role in the cognitive life of the University.”

Faust arrived in Washington on Wednesday to talk with lawmakers and administration officials about the prospect of massive federal budget cuts that threaten investment in important scientific research. Without action in Congress, the sequestration plan will take effect Friday.

In fiscal 2012, Harvard received about $650 million in federal research money.

Participating with Harvard in the National Civil War Project are Emory University, with the Alliance Theatre and the Emory College Center for Creativity & Arts in Atlanta; George Washington University, with Arena Stage at the Mead Center for American Theater; and the University of Maryland, College Park, with its Clarice Smith Performing Arts Center and CenterStage in Baltimore.

The A.R.T. has already started a series of Civil War-related roundtables that bring scholars and artists together to seek common ground. There have been three so far: “Uncle Tom’s Cabin,” “Medicine, Weaponry, War Wounds, and the Soldier’s Body,” and “Civil War Photography, Painting, Reenactment, and Memoir.”

Works in development at the A.R.T. include: