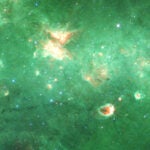 Record warmth in 2010 and 2012 resulted in similarly extraordinary spring flowering in the eastern United States — the earliest in the more than 150 years for which data is available — researchers at Harvard University, Boston University, and the University of Wisconsin have found.

“We’re seeing spring plants that are now flowering on average over three weeks earlier than when they were first observed — and some individual species that are flowering as much as six weeks earlier,” said Charles Davis, a Harvard professor of organismic and evolutionary biology and the study’s senior author. “That’s a dramatic advancement of spring. We have a long historic record that shows these are far and away the earliest flowering times on record for the eastern United States.

“When we looked at the data, I was stunned at just how early flowering was occurring,” Davis added. “It is striking, how early we’re seeing spring.”

To explain the early arrival, Davis and his colleagues point to temperature increases produced by global climate change. Using data collected in Massachusetts and Wisconsin from the mid-1800s to today, they show that the two warmest years on record — 2010 and 2012 — also included record-breaking early flowering. The study was published Jan. 16 in the journal PLoS One.

“Given what we know about historical trends in temperature and flowering times, the question has been whether the flowering dates we see today fall within expectations, and it appears that indeed they do,” Davis said. “It suggests that many spring plants haven’t hit some sort of breaking point — they just keep pushing things earlier and earlier.”

Many researchers believe that some plants have, or soon will, reach a point where they may not be able to keep pace with warming temperatures. For example, they may no longer meet their winter chilling requirements, which means that they may not get enough cool days to prepare them for spring. “With the several dozen species we looked at, that doesn’t yet appear to be occurring,” Davis said.

The possible consequences of plants reaching their limits are worrisome, to say the least.

“One potential negative consequence of early flowering is that these plants are adjusting to the point where important ecological associations are disrupted,” he continued. “One possibility is that they may shift so far that they simply miss their primary pollinators. The other aspect of this is that we don’t have a great sense of how this relates to variation among and between populations within these species. It could very well be that these species as a whole are being very negatively affected, and we’re just seeing the evidence of more resilient populations — in particular, those that are able to greatly adjust their flowering times.”

Henry David Thoreau initiated the first in Concord in the mid-19th century. Davis said, “Thoreau was making observations on flowering times across Concord for nearly a decade. We believe he may have been preparing a book to document the change in seasons in this region.”

Botanists in the early 1900s followed in Thoreau’s footsteps, collecting similar data for more than a decade. Most recently, researchers from BU have continued this effort since 2005.

The second data set was initiated in the mid-1930s in central Wisconsin, with observations made by the environmental pioneer Aldo Leopold, then a faculty member at the University of Wisconsin. Other researchers made additional studies of flowering times in the 1970s.

“The striking finding is that we see similar patterns of earlier spring in Wisconsin and in Massachusetts,” Davis said. “It’s amazing that these areas are so far apart and we’re seeing the same things — it speaks to a larger phenomenon taking place in the eastern United States.”

Davis expressed hope that the study will serve as a tangible example of the potential consequences of climate change.

“The problem of climate change is so massive, and I worry that the temptation is for people to tune out,” he said. “But I think being aware that this is indeed happening is one step in the right direction of being a good steward of our planet.

“On average, it’s about 3 degrees Celsius warmer today than when Thoreau studied Concord,” he continued. “When we talk about climate change, it can be difficult to grasp what it means when we talk about future increases in temperature. Humans may weather these changes reasonably well in the short-term, but many organisms in the tree of life will not likely fare nearly as well.”

Elizabeth R. Ellwood and Richard B. Primack, both from Boston University, Stanley A. Temple from the University of Wisconsin, Madison, and the late Nina L. Bradley of the Aldo Leopold Foundation contributed to the research.