A return to the radical 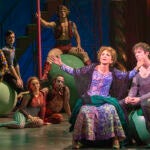 ‘Pippin’ goes to the circus

You may have read the play in high school or seen a local production. After all, in the more than six decades since its debut, Tennessee Williams’ “The Glass Menagerie” has joined the canon of great American theater. But over the course of countless stagings, the play also may have lost much of its evocative, unpredictable clout.

In a discussion at the Radcliffe Institute for Advanced Study on Monday titled “An Evening with John Tiffany,” the director and Diane Paulus ’88 argued that Williams’ unconventionality has been watered down over the years.

Paulus, artistic director of the American Repertory Theater (A.R.T.), and Tiffany RI ’11, who will direct the A.R.T.’s upcoming production of the play, intend to honor the work’s original, groundbreaking spirit. Their production will mark the first time that the A.R.T. has produced a Williams play. “We’ve presented a production or two,” said Paulus, “but we’ve never self-generated and made our own.”

Helping them in their quest to restore the play’s radical edge is the concept of “plastic theater,” introduced by Williams himself with the play. Contrary to what subsequent, realistic stagings of “Menagerie” may have led viewers to believe, the playwright railed against “the exhausted theater of realistic conventions,” encouraging instead that his plays be presented with an expressionism that more closely approaches their truth.

“It doesn’t feel as though we’re doing something radical in terms of anything to undermine or corrupt the play in any way,” said Tiffany. “I’m just taking Tennessee at his word.”

Or words: specifically, “memory play.” Tiffany found this phrase most instructive when conceiving the production’s look and feel. “In memory, anything can happen,” he said. “In memory, things are distorted, and things are exaggerated, or reduced, or not there.” He called this plasticity of the play a gift to any director, one that will, he hoped, help to capture the profundity of the work.

“Tennessee Williams, more than any other author, is about emotional truth and raw expression,” said Paulus. “It’s not about the realistic recreation. It’s about a poetic expression or transformation.” Without spoiling the look and feel of the A.R.T. production, Tiffany added, “I don’t think ‘The Glass Menagerie’ has looked like this before — ever.”

In addition to a preview of sorts of the ideas and methods behind the new production, Tiffany and Paulus told stories of how their collaboration came to be, and they provided a behind-the-scenes look at how the casting selections were made, including the choice of the award-winning Cherry Jones as Amanda Wingfield. That was instrumental in bringing the playto Cambridge. (Jones was a founding member of the A.R.T.)

According to Tiffany, persuading Jones took a great deal of effort. She had vowed never to do the play, perhaps because she found it claustrophobic. In fact, said the director, “Once she got past the age where she could play Laura, she gave every single copy that she had of ‘The Glass Menagerie’ … away.”

It was only after Tiffany set up a reading of the play at the New York Theatre Workshop — “just for us,” he told her — that Jones finally relented, saying “When do we start?” She will be joined onstage by Zachary Quinto, best known for the television shows “Heroes” and “American Horror Story,” who will play Tom. Described as “a stage creature” by Tiffany, Quinto has a longtime love of Williams’ work.

Paulus and Tiffany understand experimental theater. Paulus earned a reputation as an avant-gardist when she co-created “The Donkey Show,” a reimagining of “A Midsummer Night’s Dream” as a disco fable, which she revived when she arrived at the A.R.T. in 2008. Later, she brought “Sleep No More,”a co-production of the A.R.T. and London’s Punchdrunk theater company, to Brookline’s Old Lincoln School. That was an interactive version of “Macbeth” that incorporated elements from filmmaker Alfred Hitchcock into a site-specific, immersive experience.

Tiffany was once associate director of the National Theatre of Scotland, an unconventional, nomadic theater whose motto is “Theatre without walls.” There, he directed the international sensation “Black Watch,” a military drama originally staged in a drill hall in Edinburgh. While a Radcliffe fellow, he delivered the Julia S. Phelps Lecture in Arts and the Humanities, “Can We Keep Up? Theater’s Incredible Ability to Evolve.” In the lecture, he explored his approach to theater, a medium he said should keep up with modern audiences through variety, interaction, and a sense of fun. He then went on to reimagine “Macbeth” as a one-man show set in a mental institution.

Most recently, both directors have earned praise and awards for musicals born at the A.R.T. and now on Broadway. Paulus’ reimagined “The Gershwins’ Porgy and Bess” won the Tony Award for best musical revival, while Tiffany won a best director Tony for his stage adaptation of the film “Once,” which also won for best musical. “Once” workshopped at the A.R.T. in 2011, and was the first collaboration between Tiffany and Paulus.

Introducing and moderating the event, Radcliffe Institute Dean Lizabeth Cohen RI ’02 called Tiffany “the first offspring” of another developing collaboration, this one between the institute and the A.R.T.

“We have been neighbors for years,” she said, “but this evening signals that a new, programmatic partnership is under way.” Look for the next “joint production” of the two local institutions on Radcliffe Day, May 31, when a panel discussion at the A.R.T., called “From Artist to Audience,” will celebrate the arts and probe the challenges involved in keeping them alive and well.

“The Glass Menagerie” plays at the Loeb Drama Center from Feb. 2 to March 17.